A preacher, a rabbi, and a bishop walk into a bar...

Religion is right at the center of American life — in fact, it’s such a huge force that it’s hard to track and analyze. Political scientists Robert Putnam (of Harvard) and David Campbell (of Notre Dame) have done just that, though, in their new book, “American Grace: How Religion Divides and Unites Us.” In an interview with Richard Madsen, a sociologist, published in The Hedgehog Review, Putnam and Campbell explain what they’ve found: Religious life in America today is more fluid and open than it’s been in decades.

In the 1950s, Putnam explains, America was a country with “three mutually tolerant but not connected faiths — Protestant, Catholic, and Jew.” Those faiths were closely tied to ethnicity; boundaries were very strong not only between the faiths, but between their denominations. Americans were likely to inherit their religions, and to pass them on to their children. Today, Putnam and Campbell argue, those differences don’t matter as much. Between one-third and one-half of all marriages are interfaith marriages. More than one-third of Americans switch denominations or even religions, often several times. Many people have diverse social networks, make friends across religious lines, and regard all religions as containing “basic truths.” American religion is less about “hermetically sealed and inherited religious faiths” and more about tolerant choice.

Does all this tolerant denomination-switching boil down to religious wishy-washiness? Putnam and Campbell say no. Being open-minded doesn’t make your religious feelings less strong; it leaves untouched, and might even emphasize, the obligations that resonate “deep in our own faiths.” Religion, they argue, still has the power to transform even a very ecumenical America.

How history became a game If you’re of a certain age, your first memory of a computer is likely to be a video game called The Oregon Trail. Minnesota’s City Pages tells the story of the game’s early days, when it was an underground sensation, played only by Minnesota schoolkids through a teletype machine installed in a janitor’s closet.

The Oregon Trail — a computer game in which players go on a simulated wagon journey out West, making key decisions along the way (take the Donner Pass or go around?) — was invented by a group of nerdy, computer-programming public school teachers in 1971. It was originally conceived as a board game, but Don Rawitsch, Bill Heinemann, and Paul Dillenberger (all Minnesotans) quickly realized its potential as a computer game, and spent two weeks programming it on a middle-school teletype terminal. Their students played the game without a screen, by taking turns pecking out commands on the console, which forwarded them on by telephone to a mainframe computer; the game’s prompts (“You have dysentery”) came out of a printer. In subsequent years, the game was accessed by kids statewide through the same method.

Everything changed in 1978, after a handwritten bid was submitted by Steve Jobs and Steve Wozniak of , then just two years old. Apple IIs were installed in schools throughout Minnesota, and the game was rewritten in the form in which millions of students have encountered it since then. Over the past 40 years, 65 million copies have been sold, making The Oregon Trail the most widely played educational game of all time. Nowadays, you can play it on your iPhone for 99 cents.

The Oregon Trail wasn’t just one of the first computer games — it was, as City Pages’ Jessica Lussenhop points out, “one of the first simulation computer games.” In fact the emphasis, for its creators, was on simulation. Looking back, one of the most striking things about the game is its accuracy: The programmers pored over actual settlers’ journals to figure out exactly how often players should break their wagon wheels, get sick, or meet helpful Native Americans, and painstakingly integrated those probabilities into the game. The Oregon Trail made pioneer history more fun — but it also made it more accurate.

Notes from an ultra-high achiever Princeton English professor Jeffrey Nunokawa is famous on campus for being, more or less, the most dynamic man alive: An influential scholar of Victorian literature, he’s also the super-social master of Princeton’s Rockefeller College and a gifted, hyper-energetic teacher with a cult following. (Full disclosure: I was a member of the Nunokawa cult as an undergraduate.) Nunokawa has taken it over the top, though, with his newest project: He’s written more than 3,200 short essays using Facebook’s Notes feature, on subjects as diverse as literature, television, and the Spanish soccer player Fernando Torres. They’re read by academics around the world. One professor explains in the Princeton Alumni Weekly that she joined Facebook just to get access to “Jeffbook.”

Nunokawa started his essay series in 2005, after teaching a course called The Form of the Essay. (He began with a response to Wittgenstein’s famous assertion, “That about which we cannot speak, we must remain silent.”) Now he writes about an essay a day, often revising it and adding footnotes afterwards. The essays are meditative and exploratory, rather than argumentative; sometimes they address literary subjects, but often they branch out. Many start from quotations. One essay begins with a quote from an Isaac Bashevis Singer short story (“If there is such a thing as truth, it is as intricate and hidden as a crown of feathers...”), which starts Nunokawa writing about “the silent (or nearly so) subtlety of Truth during times of loud trouble.”

Nunokawa’s essays reveal, retrospectively, a missed opportunity in the world of Internet writing. Blogs, which are now the default format for writing on the Web, are personal, timely, and argumentative: One contributes to the blogosphere by making a point. Nunokawa’s essays, by contrast, are more leisurely and less definitive. They explore and refine a sensibility. Taken together, they don’t add up to an extended argument, but to something like Pascal’s Pensees — a record of 3,200 contemplative moments, recorded for posterity and open for comment.

Meanwhile, it’s anybody’s guess when, exactly, Nunokawa writes his essays. According to the Princeton Alumni Weekly, “Rumors about Nunokawa abound. Some people claim that he reads a book a day, others that he never sleeps. He can quote pages of poetry from memory. ‘He does an hour on the Stairmaster every day at a level that’s just ridiculous,’ says [one undergraduate]. ‘I couldn’t last five minutes at the rate he’s going.’ ” 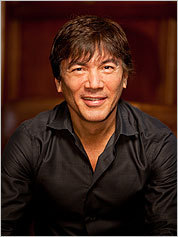 (Ricardo Barros) Professor Jeffrey Nunokawa
Your comment is subject to the rules of our Posting Policy
This comment may appear on your public profile. Public Profile FAQ