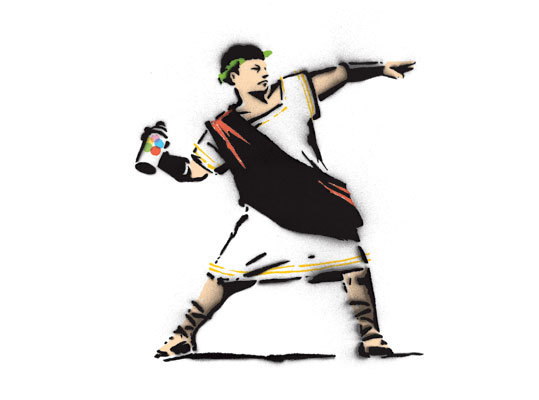 Cast your mind back to the history books you read in school, the ones that covered classical Greece and Rome, and you’ll probably find yourself thinking about people like Pliny and Plato, Seneca and Socrates, men who seemed to spend the bulk of their days orchestrating epic battles and formulating complicated theories about shadows in caves.

It seems less likely that you’ll recall the anonymous Athenian who, some 1,500 years ago, snuck out in the middle of the night to inform the world that a certain Sydromachos had a backside “as big as a cistern.” Likewise, the fact that someone named Titas was “a lewd fellow” will almost certainly have passed you by.

As for the pictures in the clomping textbooks of old, these would have consisted of grainy busts and urns, not boomerang-shaped penises or disembodied testicles. But times have changed, and there they are, on page 94 of “Ancient Graffiti in Context”: the free-floating genitalia of Hymettos, carved into the rocks there by someone with time on his hands and a loose grasp of human anatomy.

You at the back there: Quiet.

The essay accompanying these images does not invite prurient interest. These carvings, we learn, have a great deal to tell us about “social connectivity” and “cultic resonances” in the ancient world. The new book in which they appear contains 10 densely argued essays in all, covering everything from sports-related goading in Aphrodisias to shout-outs among friends in Pompeii. As for what people were etching and daubing back then, a good deal of it cannot be reprinted in a family newspaper. The first thing we learn is this: People in the ancient world were very, very sweary.

Claire Taylor and Jennifer Baird, coeditors of “Ancient Graffiti in Context,” would be irritated by that last remark. Phallic imagery on a public wall in the ancient world was not intended to cause shock and dismay, says Taylor, who teaches Greek history at Trinity College Dublin. Instead, these images were intended to express religious devotion and community. “Context,” she says, “is everything.”

Taylor and Baird don’t quite fit with what we know about classical scholars. They occupy the sharp end of a small but enthusiastic group of academics who argue that the “Great Men” approach to history has left a gaping hole in our understanding of the ancient world. The stuff that ordinary people scratched on their city walls, the argument goes, can be far more illuminating than yet another account of the Battle of Corbione.

According to Baird, an archaeology lecturer at the University of London, the idea for publishing a collection of research on ancient graffiti came up during a conversation in a pub. “We had problems with how graffiti was being treated (or not) by archaeologists and historians,” she says. “It’s not just idle scratches, but something that gives real insights into people’s lives.”

This is not to say that graffiti has been entirely overlooked by conventional scholars. Historians have noted and cataloged it, and occasionally used it to look into things like literacy rates and class divisions, but that’s about all. The fact that graffiti is being treated as a serious, stand-alone body of evidence represents something new, something that goes even further than the folk history that has pervaded certain corners of academia in recent years. We’ve had Outsider Art — now we have Outsider Research.

At first glance, anyway, what we see when we look at the clutter of graffiti in Pompeii and Athens doesn’t seem particularly enlightening. There are plenty of puns and insults and expressions of romantic yearning, but very little in the way of depth. As the first-century essayist Plutarch put it: “There is nothing useful or pleasant” about graffiti, “just that X ‘remembers’ Y ‘for good,’ or that someone is ‘the best of friends,’ or much similar nonsense.”

If Plutarch sounds a bit grouchy here, he had good reason. Cities in the Greco-Roman world were absolutely rife with graffiti. No subject was too large or too small for these people to share their thoughts about it in a public space — from imprecations to the gods to notations on the price of cheese. You found graffiti in temples and garrisons, living rooms and latrines. Everyone was at it.

This fact represents a central problem facing scholars interested in exploring this subject. As one of the essayists in Taylor and Baird’s textbook points out, nobody can really decide which set of marks is historically interesting and which is simply an eyesore. The only possible consensus seems to be that the older the graffiti, the more interesting it becomes. An inscription about the sexual preference of Aithonides, citizen of Attica, might be worthy of study; a felt-tip scrawl concerning Steve of San Francisco probably isn’t.

But the graffiti scholars soldier on. The anti-Aithonides slur, we learn, is part of a cluster of similar inscriptions, which, taken as a whole, shed light on male rivalry and machismo in the ancient world. “Their authors wanted to humiliate and insult their opponents,” writes Angelos Chaniotis, a classics researcher at All Souls College, Oxford. “We are not dealing with sexuality, but with competition and power, with notions of superiority and domination.” And we are dealing with these things, importantly, in the most mass-market manner available at the time. These were very much “public performances.”

Vulgar chest-thumping played a big role in a lot of ancient graffiti, but there are plenty of gentler examples to be found. “Therefore, make me die, you who force me to live without you,” some tortured soul wrote on the wall of the Basilica in Pompeii. “The reward for the good surely will not be to be put to the rack.” In a house in Roman Campania, children scrawled images of wobbly boats and five-legged birds, which are very cute.

Academics aren’t generally interested in cute, however, and the Campania etchings are clinically picked apart to explore everything from the degree to which they reflect modern theories on development psychology (“children draw what they know rather than what they see”) to what they can tell us about the movements of kids in a typical Roman household. “The graffiti are archaeological evidence of children’s presence and activities and are, therefore, worth detailed and separate exploration,” writes Katherine Huntley, a PhD student at the School of Archaeology and Ancient History at Leicester University.

Clusters of chatty graffiti in Pompeii, meanwhile, are said to provide clues about how adults forged and maintained social relationships — and, more pertinently, how eager the citizens of Pompeii were to present their friendly banter in a public setting. These people, as one scholar argues, were effectively tweeting each other.

There is something deeply fulfilling about being able to draw parallels between the mundane and the exotic — be it faraway places or the distant past — and the study of ancient graffiti provides plenty of opportunities for that. The sexual boasting, the political griping — if it weren’t for the cryptic-sounding names and the strange syntax, you could be reading this stuff on the benches of the Harvard Square T. And then there’s this, more than 2,000 years old, etched into a wall in the Villa of the Mysteries in Pompeii: “Rufus est.” This is Rufus.

Susan Farrell, who oversees the website www.graffiti.org, says that the underlying motive for all graffiti writers is “the urge to make a permanent mark during an ephemeral life.” This fact is as true of the wall-scratcher Rufus as it is of the kids in Sao Paulo who climb railroad bridges to spray paint their elaborate tags. “I think of it as the need for meaningfulness,” says Farrell, “which I believe is a basic human urge.”

One of the chapters in “Ancient Graffiti in Context” explores the rock faces at El Kanais, a remote outpost in the Egyptian desert, which are cluttered with names and dates left by generations of travelers who simply wanted to state that they were there: “Demetrios wrote this” and “Zenon came up here too.” Some of the more intrepid graffitists had clambered up onto ridges high above the desert floor — just like those crazy kids on the bridges of Sao Paulo.

A few weeks ago, Theodora Richards — daughter of Rolling Stoner Keith — was arrested for defacing a nunnery with a red paint pen. Her message to the world: “T [HEART] A.” Centuries earlier, a citizen of Aphrodisias etched a similar sentiment on the column of a portico there: “I love Epikrates.” Such inscriptions, as one essayist puts it, reveal that these ancient cities, so far removed from the world we live in now, “were inhabited by people, who lived and loved, quarreled, hated.”

Not so very different, after all, from you and me.

Baird insists that we should be careful about using graffiti to draw parallels between the ancient world and our own. “It is incredibly tempting to do this,” she says. “And while there’s certainly something universal in the need to make one’s mark on the world, it’s important we recognize the ways in which things are different.” Context is everything.

Maybe so, but the more I learn about graffiti in the ancient world, the more I am reminded of a line, crudely spray-painted onto a wall not far from my house: “You are not alone.”

Chris Wright is a writer living in Spain.