Why are so many working mothers haunted by constant guilt?

One night, my 6-year-old wandered into my room and found me buried in a stack of magazine proofs, scanning line after line of text and marking errors with a red pen. He asked what I was doing.

When I explained that mama was “making the magazine” — fixing mistakes, moving words, and eventually entering the changes into computer files that would then go to a printing press in Vermont — Owen wondered out loud how grown-ups could be in charge when they had so little common sense.

“Here’s what you do,” he started. “You take a giant piece of tape and tape all these pages together on one side. Then you flip it over and tape them on the other side. And see? Your magazine is all done. Now we can play Swampfire!”

It was the kind of moment I had fantasized about as a newspaper reporter, when hourlong commutes to Boston defined my existence and visions of work-family balance were just that — visions. Now here I was, with pajamas and a laptop, working in the family-friendly universe of quarterly magazines. And here was my firstborn, peeking in to entertain me with his shiny curls and a seminar on print production.

But I didn’t feel entertained or balanced. I felt guilty and stressed. Stressed because, contrary to Owen’s critique, I was working at maximum efficiency, plowing through the many pages I knew I had left to go. And guilty because — say it with me, moms — I would not play Swampfire that night.

On talk shows, in online support groups, and in our most private thoughts, it seems impossible to utter the word “mother” without uttering the words “bad mother.” These days, a mommy blogger can make an entire career (so to speak) trafficking in guilt, wearing her failures like badges of honor: “I let my infant watch five hours of TV!” “My toddler dunked his head in the toilet!” Whether you’re a blue-suit executive, a bank teller, or Dr. Phil, we all know — or think we know — about family, work, conflict, and guilt.

Now, researchers at the University of Toronto have thrown new light on the guilt question by doing something very few work-family scholars have tried, even though it seems obvious: quantifying the emotions we experience as work and family boundaries become increasingly blurred, and measuring the effect those emotions have on our psychological well-being.

The study, published in this month’s issue of the Journal of Health and Social Behavior, asked a cross-section of about 1,800 American workers how often they were contacted outside the workplace by phone, e-mail, or text about work-related matters. According to the findings, frequent contact by bosses, co-workers, or clients led to increased feelings of guilt — but only among women. While men tended to feel the same amount of guilt whether work encroached on their personal time a little or a lot, women were almost twice as likely to report feeling guilty as the phone calls, e-mails, and texts increased.

The guilt had nothing to do with women’s actual ability to navigate competing obligations at work and at home; on the contrary, the study found that logistically, women were able to juggle the two spheres just as well as men. It’s how women felt about themselves while doing that juggling that set them apart.

“This is really about the reaction and response of guilt and distress to this kind of work contact,” says Scott Schieman, a University of Toronto professor of sociology and one of the study’s lead authors. “For men, the answer is, it doesn’t seem to affect the response much at all. For women, when these things are occurring, the guilt starts taking a greater and greater toll.”

From those rising feelings of guilt, researchers found, psychological distress naturally flowed. As parents, employers, advocates, and policy makers continue to look to technological advances to ease work-family tensions, the study found that women with increased feelings of guilt from work contact were also nearly twice as likely to report symptoms of real distress: feeling more tired and run down, feeling like they couldn’t get going, and having more trouble keeping their minds on what they were doing.

The findings suggest a dark side to the idea of the computer and smartphone as holy grails for employees on that eternal quest for work-life balance. And for the first time, the numbers put real sociological heft behind the guilt response — a phenomenon legions of women experience as strictly individual failure.

“I think what’s pathbreaking about this paper is it’s an attempt to systematically assess guilt as an outcome of work intruding on personal time outside of normal work hours, and how gender might matter for that,” says Mary Blair-Loy, who was not involved in the study and is the founding director of the Center for Research on Gender in the Professions at the University of California San Diego, where she also teaches sociology.

Blair-Loy’s research centers around a concept she calls the work devotion schema — a kind of invisible, coercive mandate that permeates culture and requires us to see our work as a sacred calling, with meaning and value beyond just a paycheck. It’s a code employees are socialized into early, through professional schools, associations, and ultimately the institutions where we work. Once that moral code is ingrained in us, Blair-Loy says, it can trigger the uniquely moral emotion of guilt when family demands butt up against work allegiance.

The problem with the work devotion schema, Blair-Loy says, is this: While men and women both experience it, only women experience its mirror image at home. Blair-Loy calls it the family devotion schema; gender studies scholar Sharon Hays has termed it the ideology of intensive motherhood. Either way, it sets up a collision course of competing devotions for working women.

“Just like our culture has constructed work to have certain meanings and obligations, it has also constructed motherhood to have certain meanings and obligations,” says Blair-Loy. “Mothers who work full time are still trying to live up to this ideal of family devotion; they just have fewer hours to do it in. That’s why the work-related contact is such an intrusion for women — because the quality of parenting that is expected is very high.”

In 1987, Fortune magazine sent waves of controversy and anxiety rippling across America’s board rooms with the cover story “Executive Guilt: Who’s Taking Care of the Children?” It’s a question some parents find themselves uttering more often than they’d like to admit. Lately, my husband and I have taken to asking it weekly — usually as one of us is racing to pick up our stranded daughter from her new preschool, because we keep forgetting there’s actually a new preschool schedule.

More recently, websites like Blue Suit Mom and Her Bad Mother (which struck bad-mommy gold with the cri de coeur, “Bad is the new good”) have spawned countless books, workshops, support groups, and top 10 lists whose underlying message is that, no matter how guilty mothers may feel, it’s perfectly OK to be imperfect.

But as trendy as work-family guilt has become in popular culture, its role and impact have been relatively under-researched. Most of the scholarship on guilt and work-family roles has been qualitative, based on small samples of women and their individual narratives of guilt.

“One of the themes we kept noticing in smaller qualitative studies is how much the word guilt just kept coming up over and over in women’s stories,” Schieman says. “We were kind of surprised at how remarkably our quantitative findings mapped onto those qualitative stories.”

At the same time, Schieman says, the qualitative studies also predate the smartphone revolution. In many ways, that revolution has shifted the work-family debate from a problem of logistics — being at the office or being at the soccer field — to a more fluid, complex, and potentially stressful problem of blurred boundaries. Citing other leading scholars, Schieman’s study makes a powerful argument that we can no longer see the modern-day worker as just a static figure, torn between incompatible demands and wishing for a body double. More and more, researchers argue, workers are becoming more akin to “border crossers” — able to work from anywhere, anytime, and transitioning from a work mentality to a family mentality whenever work spills over into the home.

Those “boundary-spanning work demands,” as Schieman calls them, may strike at the heart of work-family distress: It’s not so much about having to choose between two competing tasks, but having to continually and unexpectedly shift between two incongruent identities.

“You have so much more flexibility. You can go to a cafe or you could be going on vacation and be working,” Schieman says. “Part of the question has to be, what are our expectations going to be moving forward about the boundaries between work and the rest of our lives? What is family time, really?”

Whatever the answer to that question is, it also raises another dilemma with no easy answers, especially for mothers. For a lot of us, the problem isn’t just how to create family time that is sacred, but figuring out how to spend it without feeling the pressure to mother like we work, with maximum efficiency and aiming for an unattainably high level of devotion.

That urge is powerful. It’s the reason it took me two years to figure out that I could just get on the T with my kids and ride it with no planned destination, instead of trying to organize the outing of a lifetime every time I took them into Boston. It’s the reason I stayed up until midnight the night before Valentine’s Day, crafting handmade cards with various rubber-stamp techniques for my son and his friends instead of driving to , buying cards, and then going to sleep.

“If women are feeling guilty and divided between home and family, I have to wonder if the norms for motherhood have escalated,” says Rosanna Hertz, professor of sociology and women’s studies at Wellesley College. “You have to be making banana bread, not buying it from the store. You have to constantly be escalating the kind of mothering you’re providing in order to feel competent. That’s serious guilt, and it may be those invisible pieces of motherhood are also playing a role. Maybe a bigger role than we care to admit.”

I actually have no problem admitting it, or even making a little fun of it. The problem I have is figuring out how to de-escalate it. Which I think means I now have something new to feel guilty about.

Francie Latour is a writer and editor who lives in Sherborn. 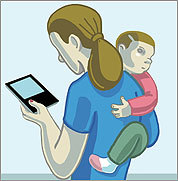 (Allison Seiffer for The Boston Globe)
Your comment is subject to the rules of our Posting Policy
This comment may appear on your public profile. Public Profile FAQ