How we could use the white stuff as architecture – or art 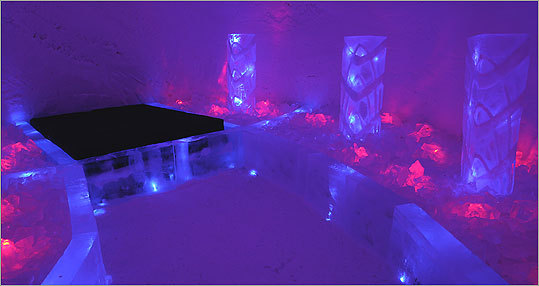 Bostonians love to rant about winters in the city, but this year more than others our complaints seemed justified. The city received a staggering amount of snow — over 78 inches so far, more than double what fell last year. As the snow jammed sidewalks and squeezed into traffic lanes and parking spaces, cities and towns throughout the region struggled to push it out of the way. Now the rains have largely washed away those ugly piles, and our thoughts are turning to spring.

But another winter will come, and perhaps the next time nature dumps this much, we could try a different approach: use the overabundance of snow to create something beautiful. We’re used to seeing small-scale bursts of creativity in the snowmen and forts that people craft in parks and backyards. Yet when faced with so much excess, why not apply those impulses on a grander scale? Around the world, innovative artists, architects, and planners in cold climates have used snow as a design material, transforming it into giant pieces of public art, architecture, and landscaping. These projects draw on the unique aesthetic properties of snow, turning a burden into a thing of beauty.

Snowscape Sergio López-Piñeiro, an architect and faculty member at the University of Buffalo, spent time observing and photographing the snow accumulating in that city’s parking lots, interested in the contrast between the beauty and serenity of snow and the aggressive way we attack it with snow blowers, salt, and plows. López-Piñeiro says these observations inspired him to initiate a project this year that “transforms a parking lot into a snow landscape.” With support from the Buffalo Olmsted Parks Conservancy, the New York State Council of the Arts, and a team of snowplows, he has created a pattern of 11 large mounds in a parking lot of Buffalo’s Front Park, which overlooks the Niagara River and Lake Erie, turning the flat expanse into an eye-catching landscape. The hillocks, each about 6 to 8 feet high and 30 feet wide, are laid out in a regular pattern, and the plows maintain the design by following a choreographed path through the lot. The haphazardly plowed snow pile we’re used to seeing is transformed into a deliberately crafted form. Over time, the mounds are shaped by the wind, and they grow and ebb as snow falls and freezes. López-Piñeiro says that the empty lot now draws foot traffic from the park and he has spotted children sledding on the hills.

Snow design German-born artist Sonja Hinrichsen was hiking in Colorado in 2009 when she was inspired to start making designs in open fields. Donning a pair of snowshoes, she created a series of large looping whirls and spirals, each drawn with a single unbroken line. In the winters that have followed, she’s worked in northern New Mexico and the Lake Tahoe area, and this year, she created designs on a frozen lake in the Ooms Conservation Area in Chatham, N.Y., and at a site in northwestern Colorado. The work takes advantage of the blank, sprawling quality of snowfields and follows the contours of the landscape. Viewed from ground level, the repetitive curved lines are a lesson in perspective, creating visual texture across otherwise blank stretches. Viewed from above, the designs look as if a giant had been doodling in the landscape, decorating the white spaces and margins around forests and buildings. Some pieces persist for days and others are quickly covered with new snowfall, but Hinrichsen embraces the unpredictability. “They’re very ephemeral, but I like that about them,” she says.

Snow gallery Artists Matt Burnett and Scott Fuller took advantage of the deep snow that collects in upstate New York to create an art installation. Called E-Lumination, it consists of a series of large orbs of snow, 8 feet in diameter, that serve as canvases for projected images. Fuller and Burnett built the orbs at two sites in upstate New York — in Burnett’s hometown of Long Lake, and on the State University of New York campus at Canton where he teaches. To build these giant snowballs, the artists created wooden box frames, which they filled with snow with the help of a front-loader. They then dismantled the molds and shaped the snow into rounds. At night, they used LCD and slide projectors to light up the orbs with a rotating selection of artwork. At Long Lake, they used historical local photographs, and at Canton they chose abstract imagery drawn from nature, including videos of ice, water, and fire, and colorful silk-screen paintings made from layered branches.

Snow architecture In Finland’s remote Lapland region, the Lainio SnowVillage is created each year using 1,000 truckloads of snow. The architecture of the buildings changes each year, and includes a restaurant, a bar, and a hotel. The SnowHotel’s ornate rooms are often decorated with ice sculptures illuminated by colorful lights. A single room at the hotel, where you’ll lie in a sleeping bag surrounded by thick walls of snow, begins at around $250, or you can upgrade to a suite filled with ice art. The hotel maintains two warm rooms for anyone who gets too cold in the middle of the night. Another option, farther south by Finland’s Gulf of Bothnia, is the SnowCastle of Kemi, which caters to families, with musical performances, a snow slide, and impressive ice sculptures. The complex also includes a snow hotel and even a snow chapel available for weddings, where guests crowd onto benches made of ice blocks.

Courtney Humphries is a freelance writer living in Boston and author of ”Superdove: How the Pigeon Took Manhattan...And the World.”