An ingenious way to get kids to eat healthy: Give cafeterias a psychology lesson 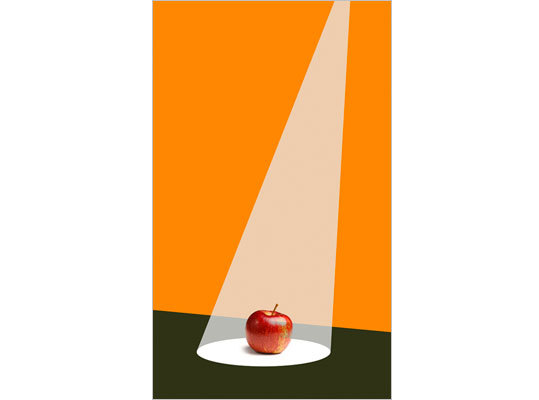 Brian Wansink first became interested in the school lunchroom when he was asked to help a group of New York schools boost fresh fruit consumption among students. The state wanted to know how much they’d have to drop the price of apples to sell 5 percent more of them.

But Wansink, a Cornell professor of applied economics, feared the schools could make the fruit free and students still wouldn’t eat more. He had a different idea: He told the school lunchroom managers to buy an attractive bowl from T.J. Maxx, and use the bowl to display the fruit in a prominent, well-lit place in the lunchroom.

The schools saw fruit sales double. More remarkable still were the results of one school that misunderstood the “well lit” instruction. Managers there found a desk lamp in the back office and set it up to shine directly on their fruit bowl. At that school, sales of fresh fruit increased 186 percent.

In the growing national push to improve school lunches, reformers typically start with the food — revamping menus to boost whole grains and jettison cookies. Wansink thinks that schools can encourage healthier eating using cheaper, easier, and more kid-friendly fixes. He’s found, for example, that children are less likely to eat ice cream if it’s stored in an opaque cooler instead of a clear one — and that children are more likely to choose plain skim milk if chocolate milk is a little harder to reach. Schools he’s worked with have shown increases in lunch attendance and the number of children choosing such healthy foods as fruits and vegetables. And because the changes are inexpensive, they have the potential for widespread appeal. Most important, he says, his strategies don’t drive kids out of the lunchroom by removing foods that they like.

Nationwide, public school lunchrooms serve about 32 million kids each school day, making them a key target for reformers bent on reducing the public health burden of childhood obesity. Public health officials, celebrity chefs, education reformers and politicians — including first lady Michelle Obama, who has chosen childhood obesity as her signature issue — have all seized upon the lunchroom as a laboratory for improving the diets of young people. The White House has convened several panels of experts to advise on school lunch policy. Just before Christmas, Congress passed legislation boosting the nutritional requirements for meals served in schools, and imposing calorie ceilings on school-served meals. In Massachusetts, the Legislature recently passed new rules limiting what snacks schools can sell in lunchrooms and vending machines.

So Wansink’s work, with its low-cost approach and its measurable results, might seem to be a welcome development in circles committed to improving child nutrition. But his ideas have been met with limited enthusiasm by most food reformers, who are focused on changing school menus.

“I’m a proponent of just getting rid of the unhealthy foods and just not having them as an option,” said Kathryn Henderson, director of school and community initiatives at Yale University’s Rudd Center for Food Policy and Obesity, an influential research and advocacy group.

The nutritional content of school lunches has been basically the same for decades, with only a few tweaks along the way. Regulations require schools to provide certain types of food at each meal and meet certain nutritional goals that ensure children get a relatively balanced meal. What has changed in recent years is that kids have been getting fatter. When the surgeon general issued a “call to action” on childhood obesity in 2001, about 13 percent of children were obese, a more than two-fold increase from the previous 20 years. Since then, the rate has risen to 17 percent.

School lunches may not be the cause of rising childhood obesity, but for many advocates, they have become an attractive target. Policy makers can’t remove French fries and fruit punch from kids’ homes, but they can remove them from cafeterias. Healthier lunchrooms, the thinking goes, will ensure not just that kids get better lunches, but that they learn healthy eating habits.

“Even if it’s not the fault of school food, can’t school food be a major player?” asked Janet Poppendieck, a professor of sociology at Hunter College and the author of “Free for All,” a recent book on school lunch reform. “Because that’s the part of the child’s food intake that is publically subsidized and publically determined.”

Around the country, enterprising school districts and motivated chefs have begun experimenting with healthier approaches. It’s turned out to be quite difficult. For one, school lunches are a low margin business. The typical school district lunch budget must be self sustaining, which makes lunchroom managers understandably risk-averse. Schools typically receive a little less than $3 for each meal served to a child eligible for a free meal. And that total must pay not only for ingredients, but for lunchroom staff, kitchen equipment, the manager’s salary, and all the reports and other paperwork required by state auditors. The average school is left with about a dollar to spend on food. Some innovative schools — including a few in a Boston pilot program — have used special subsidies to bankroll menu changes and have seen good results. But for the vast majority of school districts, new “healthier” foods can add both expense and risk. They tend to require pricier ingredients and more labor-intensive cooking techniques, and come with the chance that picky students will not buy them.

“If you go too healthy — the kids are shy — they won’t participate and eat the meal,” said Charlene O’Connor, school lunch manager for the Plattsburgh, N.Y., school district. O’Connor has participated in a few of Wansink’s pilot programs. She said she’s been heartened enough by the results to try more ideas. Her high school is located near several fast food restaurants, and she said that students will leave campus to eat if they’re unimpressed by the cafeteria offerings.

“I do run pizza every week,” she said. “And pizza is not necessarily a bad menu choice. It has all the components in it. I try to make it healthier with a whole grain crust. If I were to get rid of the pizza, that would definitely hurt my bottom line.”

And maybe the kids, too. Several studies have shown that, whatever school lunches’ flaws, they are still healthier than the meals children bring from home or buy from outside vendors.

Wansink’s school lunch work grows out of a career spent uncovering the environmental cues that influence adult eating. Instead of studying diet through the lens of nutrition, he’s approached eating as a form of behavior. In one series of experiments, for example, he showed that almost everyone — including dieticians — will select and eat more food if they are given larger plates. He found that the visibility and convenience of foods influences intake. In one experiment, he found that secretaries who kept transparent candy dishes on their desks ate 71 percent more candy than those who used opaque dishes. In another, he found that keeping additional food on a sideboard instead of the center of the table kept many people from seeking seconds at dinner.

One behavioral pattern that Wansink intuited immediately about school lunch patrons is that they are generally resistant to change. One experiment his team tried early on was to see how offering kids taste tests of new foods would improve their desirability, a program that he thought would be a smart way to introduce new, healthier menu items. It was not.

“Kids are herd animals, and if the person who tries the new food goes ‘Ick,’ every kid after that knows they will not be cool if they like it,” Wansink said.

But it turns out that students are susceptible to the same marketing strategies that grocery stores have been using for years. Several experiments have shown that children will be more likely to eat items if they see them early in the lunch line and find them attractive and convenient to pick up. Putting fruit in a good-looking bowl works. So does putting a salad bar in a prominent place. Calling your carrots “X-ray vision carrots” can double sales.

In one experiment, Wansink and his team compared two approaches to salad bars. In one, the salad bar was parallel to the lunch line and required students to leave the line and return after selecting a salad. In the other, it was perpendicular and unavoidable as children moved through the cafeteria. The studies showed that the mere presence of a salad bar was enough to increase vegetable sales. But the convenient, prominent salad bar led to significantly more sales.

Similar approaches work in reducing the consumption of less healthy foods. Wansink’s team has shown that putting chocolate milk in the back of the cooler, behind healthier drinks, will cause more children to pick unflavored milk. The most determined, chocolate-loving kids will reach further, he said. But many do not expend the extra effort. Ditto with the unhealthy, a la carte snacks that many lunchrooms serve. Wansink’s team has shown that placing such goodies out of the way and forcing kids to use cash instead of their lunch cards to pay can reduce sales.

Giving kids time and space may also help. Wansink’s team found that providing lunch trays increased the likelihood that children will choose healthy items. Tray removal has been hailed as a means to reduce food and water waste by encouraging students to only carry what they will eat. The Cornell work suggested that when they can carry little, kids reach for comfort foods first. Longer lunch periods may also allow children the time to eat a balanced meal instead of starting with dessert.

All the reformers recognize that cafeteria chicken fingers and grilled cheese sandwiches are not the sole culprits behind childhood obesity. Over the same period that obesity rates have skyrocketed, measures of exercise and home cooking have declined, while those for screen time and prepared food sales have risen. Food reformers like David Kessler, a former FDA commissioner, talk about a “toxic food environment,” with delicious, unhealthy food abundant, convenient, and effectively marketed. Parents also exert a big influence; studies have shown that the foods they offer and eat will predict their child’s preferences and chance of becoming obese.

The limitation of any cafeteria-based approach is that it can only control what happens during the lunch period, and not how kids eat and exercise the rest of the day. Henderson said there is some evidence that children who eat more healthy foods at school will not seek out compensatory junk afterward. But no one has measured whether systems that limit choices or those that encourage good ones have a bigger impact on kids’ overall eating behavior.

Wansink acknowledges that even cafeterias that encourage children to make the best possible choices have little influence when the child goes home and sees a parent overeating at dinner.

“If you’re eating chips in front of the television, anything the school lunches are going to do is not going to lessen that,” he said. “If you’re having three glasses of wine at dinnertime, then any message about moderation at school lunches is just erased.”

But Wansink suspects that an advantage of his approach is that encouraging children to pick the fruit instead of the pudding or the salad instead of French fries better prepares them for the world they face outside the school, where there’s a fast food restaurant on every corner.

“If a person ends up picking up a vegetable with their lunch time after time, the idea is that just the action of that is going to build an effective habit,” he said. “It’s the power of example and routine.”

Margot Sanger-Katz is a writer living in New Haven. 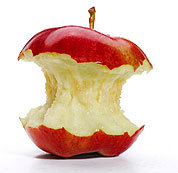 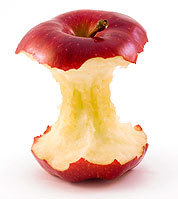 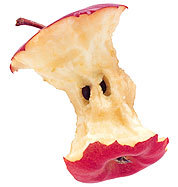