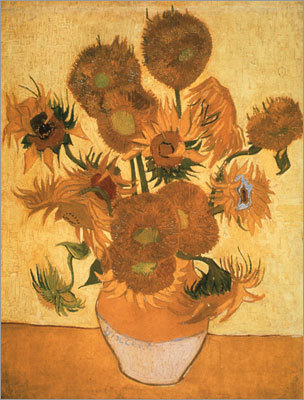 Vincent Van Gogh’s paintings of sunflowers, made in the late 1880s, are widely known for their vibrant yellow color — Van Gogh used a new kind of paint, “chrome yellow,” to achieve that now-iconic vibrancy. Unfortunately, curators around the world have watched in mystified dismay as that vivid yellow has faded to a muddy brown over the course of the last century. Now, the Journal of Analytical Chemistry reports that chemists have figured out why: In the presence of sunlight, the chromium in the yellow paint reacts with the white pigment Van Gogh used to lighten it. To stop the reaction, the paintings may have to be treated like medieval tapestries, and stored in cooler, darker galleries.

My plane is floatier than yours Lots of kids take part in paper airplane competitions, but only seriously capable adults can compete in the world of free flight duration aeronautics. Instead of making paper planes, competitors build miniature aircraft out of precision-cut balsa wood and ultra-thin plastic. The planes take days to build, according to the documentary “Float,” which is currently being filmed. Some look like plane-shaped soap bubbles — others, like creatures from the deep sea. The man to beat is eight-time world champion Jim Richmond: “Lance Armstrong,” one designer says in a trailer, “is the Jim Richmond of the bicycle world.”

The goal isn’t to fly, but to float: to prolong the wonder, essentially, of flying. The planes, which weigh less than a gram and are powered by a single rubber band, can drift on air currents for up to 30 minutes in big, enclosed spaces like stadiums and concert halls. I suspect they’re the kind of planes Alexander Calder would have made, if he’d been into making airplanes.

The uncontacted It’s almost impossible to believe, but there are still uncontacted tribes living in the Amazon — and now BBC film crews, working with Brazil’s Indian Affairs Department, have shot amazing aerial footage to prove that they exist. The footage, which was put together for the BBC’s “Human Planet” documentary, was released last week by Survival, an organization working for the rights of tribal peoples. Shot from an airplane using powerful telephoto lenses, it shows villagers in body paint emerging from thatched houses to regard the plane as it circles. Some people, alarmed, carry bows and arrows; others, more curious, follow through the trees to get a better look. It’s like peering back in time.

“Uncontacted” isn’t quite the same as “untouched.” These people will have seen planes from time to time, and may have access to modern goods through trade. But they have no sustained relationships with modern society. Survival’s goal is to convince loggers and others who use the forest to leave the tribes alone. Indigenous people, they argue, should be allowed to decide for themselves whether to initiate contact. And as José Carlos Morales, a Brazilian official, puts it: “If illegal loggers or miners contact these people, they won’t shoot images — they’ll shoot guns.” 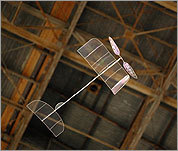