THIS STORY HAS BEEN FORMATTED FOR EASY PRINTING
THE INTERNATIONALIST

The case for a new isolationism 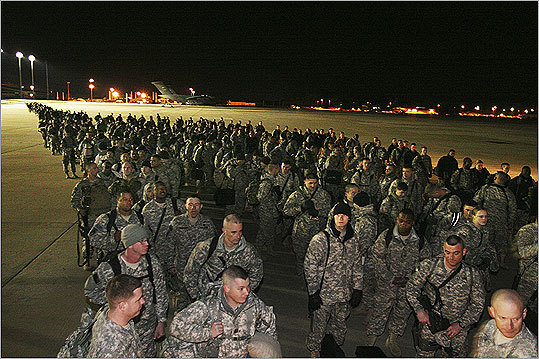 (Logan Mock-Bunting/Getty Images) Approximately 150 paratroopers from the 82nd Airborne Division got ready to deploy in support of Operation Enduring Freedom in Afghanistan on January 10, 2007 in Fort Bragg, North Carolina.
By Thanassis Cambanis February 6, 2011

There are few ways to get Democrats and Republicans to agree faster than by bringing up national security. Should America invest in a dominant, high-tech military? Should it spend time, treasure, and lives intervening in distant lands and protecting allies? Almost always, the short answer is a resounding yes. Ever since President Franklin Delano Roosevelt browbeat the skeptics and brought America into the Second World War, the country’s foreign policy has been robustly — some would say aggressively — interventionist.

Disagreements have flared only over the details: where to intervene and with what tools. Especially after the collapse of the Soviet Union, both right and left took for granted America’s position as lone superpower — and that securing America required complex engagements in global conflicts. There’s mainly a difference in tone between “liberal order building,” Princeton grand strategist G. John Ikenberry’s proposal for how America should reestablish its global position, and conservative historian Robert Kagan’s unapologetic demand for American “primacy.”

This consensus in the world’s leading economy has underwritten an unparalleled military that can strike anywhere in the world. The United States has invested trillions of dollars in projecting power, and immeasurable amounts of political capital fulfilling what it considers its rightful, if exhausting, role. Its policy makers have assumed that America must police disputes from the Straits of Taiwan to the Straits of Hormuz. The next 10 largest militaries combined do not equal America’s in size, expense, or power.

But all that glitter obscures a glaring failure, according to an increasingly energized phalanx of critics. While their prescriptions vary, they all believe America suffers from imperial overreach, fighting abroad to the detriment of prosperity at home. MIT’s Barry Posen has been developing “the case for restraint,” calling for the “stingy” use of military power. Boston University historian Andrew Bacevich argues in his latest book, “Washington Rules: America’s Path to Permanent War,” that America has become a national security state addicted to military interventions that justify its vast defense apparatus. And the University of Chicago’s John Mearsheimer, in the latest issue of the National Interest, charges that American interventionism creates more threats than it neutralizes. They, and a handful of other thinkers, say that America needs to stop meddling far and wide and concentrate on its forgotten, core interests — if it is not already too late.

“The results have been disastrous,” says Mearsheimer.

A strain of isolationism runs through the history of the United States since its founding, along with a mistrust of standing armies. Isolationists were often linked to populist or nativist politics, and were often portrayed as at odds with modernity. Beginning in the Gilded Age, isolationists resisted American involvement in the global economy and in both world wars. Pearl Harbor made “isolationism” a dirty word in American politics, proving that America had no immunity to turmoil beyond its borders. By the dawn of the Cold War, few people indeed gave isolationist views serious consideration.

Today’s new isolationists are different. World events affect America, they say, and a great power needs a potent military. But America has conflated smaller threats like terrorism with major threats, like competition from a rising China. America should not withdraw from the world, or ignore it, they say; but it should minimize direct interference beyond its borders.

Their call for a humbler foreign policy hasn’t gained much of a hearing with the foreign policy elite, and is hardly talked about in mainstream circles. They question many of America’s basic habits and reflexes, at a time when it’s increasingly clear that the “long war” has not eliminated the threat of terrorism or neutralized rogue states and their nuclear black market.

Not every danger rises to the level of an existential threat, these thinkers say; often, the best way to project power is to stay out of other people’s fights. Or as Posen, the Massachusetts Institute of Technology political scientist who is one of the most acerbic proponents of restraint, puts it: “We need to get out of the world’s face.”

Where the architects of America’s current foreign policy see 70 unbroken years of growing wealth and influence, these cosmopolitan isolationists see a story of ruin and decline. For starters, they point to America’s colossal defense budget. Washington spends about as much on security as the entire rest of the world. Politicians promised a “peace dividend” after the end of the Cold War, but defense spending has climbed from 3 percent of the American economy to nearly 5 percent.

Then there are the wars in Afghanistan and Iraq, which have kept the professional military on a continuous deployment schedule. If a more direct conventional threat emerges — say, a North Korean missile attack — the vaunted US military will not be in a position to respond effectively, the restrainers say.

America wastes much of its budget, Posen says, on allies guilty of “free riding and reckless driving.” Europe lets America provide much of its defense and offers little in return. Meanwhile, allies like Israel, Afghanistan, and Hosni Mubarak’s Egypt can defy American interests without losing Washington’s support. America, in this view, is paying too much for too little cooperation.

Finally, they say, the economic crisis proves that even a superpower like America has limits; there’s only so much money in the treasury, and only so many troops that can be deployed overseas. With America financially up against the wall, it will have to prioritize rather than treat every threat with equal urgency.

None of its best-known advocates claim to get much of a hearing in Washington, but many of them have developed popular followings. Mearsheimer, the Chicago political scientist, has a theoretical bent, couching his policy recommendations in an evolving view of the academic schools of grand strategy. But he doesn’t hesitate to take unpopular positions.

Among other things, he says America should call off its war on terror, focusing on the small number of groups directly attacking the United States while ignoring all the rest. “We do have a terrorism problem, but it’s hardly an existential threat,” he writes. During the last half century, he points out, about the same number of Americans have been killed by lightning as by terrorist attacks. He also says America should stop trying to socially engineer faraway countries like Afghanistan. Occupying foreign nations, Mearsheimer says, is bound to produce new enemies while motivating old ones.

Posen’s thinking has evolved markedly. In the late 1990s he derided “neo-isolationists” who wanted to minimize American involvements abroad (“Isolationist is what we called the people whose ideas we didn’t like,” he said). Now he counts himself among their number, and has embarked on a book and lecture tour expounding his case for restraint.

There are plenty of reasons why retrenchment should get more of a hearing in contemporary America, Posen says, but he doesn’t think power brokers will take the idea seriously until a definitive crisis limits the Pentagon or the Treasury. “It’s almost as if in foreign and security policy, democratic debate peters out,” Posen says. “If you argue for restraint, people hold up garlic like they would against a vampire and shout ‘Isolationist! Isolationist!’ ”

Stephen Walt, an ornery Harvard political scientist, writes a widely read Foreign Policy magazine blog called A Realist in an Ideological Age. He is best known for arguing that America’s minimal interests in the Middle East have been grossly exaggerated as a result of “the Israel lobby” in a book by the same name that he coauthored with Mearsheimer. These days, much of his popular analysis entails old-fashioned realist cost-benefit analysis. He sets aside sentimental historical attachments and asks simple questions (like, does America need the existing Saudi regime in order to protect its access to oil, or is their a cheaper way?) that usually, in his work, point to less American involvement.

Bacevich at Boston University has written several best-selling books attacking what he calls America’s modern imperialism. His most recent came out in the fall. Bacevich commanded ground troops in the first Gulf War and lost a son fighting in Iraq; he’s become one of the persistent critics of America’s involvement in Afghanistan and Iraq. Populist anger, as manifested in the Tea Party, is fertile ground for the school of restraint, Bacevich argues, as is an increasingly disenchanted class of professional fighters and government apparatchiks in charge of running an American policy that has failed to neutralize enemies.

“We should be less interested in big ideas than in identifying what works, what’s affordable, what’s authentically American, and what’s morally defensible,” Bacevich says.

Mearsheimer’s answer is something he calls “offshore balancing,” which means making sure no other power grows strong enough to challenge America directly. The US military remains poised “over the horizon” to intervene quickly when core interests are threatened — for instance, if a serious contender (think Russia, China, and the like) threatens to dominate the world oil supply. Projecting this type of power requires America to maintain the world’s most powerful military, with a well-funded Air Force and Navy, but not huge numbers of expensive ground troops. (Posen shares this vision for a lean, high-tech lower-manpower military.)

Bacevich takes a more radical, or perhaps more libertarian position. He believes American interventionism has become such a habit of mind that it has permeated the entire policy-making consciousness. His ideal solution would dismantle the military-industrial complex and restore an American ethic of restraint: good fences to create good neighbors.

For now, the old consensus is running strong. But for the new isolationists, America is at the tail end of an unsustainable experiment that has cost progress at home. America’s interventionist reflex has embroiled it in wars big and small and political disputes whose value to American interests is hard to fathom.

“Maybe I’m hallucinating, but there’s an awareness that this project we’re running isn’t sustainable,” Posen says. “The way we run our strategy generates new little dragons faster than we can slay the old ones.” 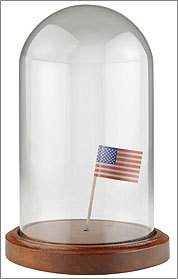