The inward journey of ’work from home’ 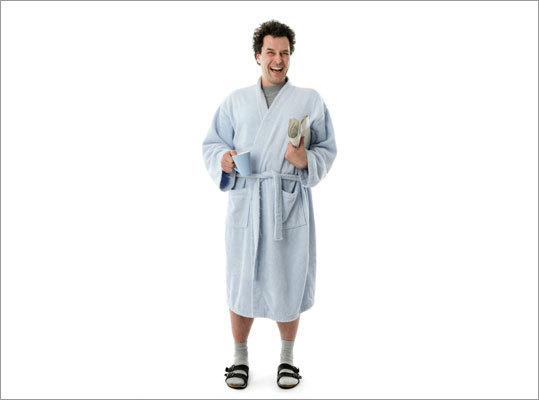 As the snow comes down and the shoveled mounds pile up, commuters from Atlanta to Boston have been “working from home” — or wishing they were. And if the idea has its skeptics — among bosses and parents alike — the phrase itself has never raised any eyebrows. But as someone reminded me a couple of storms ago, “working from home” is a relatively new way of describing the situation; older language watchers remember when we said “working at home,” not “from home.”

Of course, prepositions in English do change over time, often in ways that befuddle traditionalists. “Forbidden to” is the usual combination, but “forbidden from” is gaining ground despite its vocal critics. There are 20-year-old Americans who don’t even know that “bored of” is a recent twist on the old standards “bored with” and “bored by.”

Unlike these variants, “working from home” isn’t actually a new combination. But it has made a much more dramatic change than any of those minor preposition switches: Over the past century, “working from home” has completely reversed its sense. To our English-speaking forebears, it meant “working away from home.”

This use of “from,” all by itself, to mean “away from, apart from, absent from,” dates to the 14th century, according to the Oxford English Dictionary. Samuel Johnson used it his poem “London,” warning of the hazards of venturing out at night: “Sign your will, before you sup from home.” And in “A Tale of Two Cities,” Dickens had Charles Darnay say to Lucie Manette’s father, “I knew she was from home. I took the opportunity of her being from home, to beg to speak to you.”

During the 19th century, “working from home” meant “working outside the home”: “My father, who was a tailor, and worked from home, now took me with him as his assistant,” reads an 1847 account. A report to Britain’s House of Commons, in 1874, concluded that “when mothers are working from home, families must be neglected.” And a listing of accidental deaths, published in 1897, noted that when a man did not return from a day of fishing, “his family was not alarmed about him, as he was in the habit of working from home.”

But the more explicit “away from home” was gradually gaining on plain “from home” throughout the 19th century, and by the early 20th century it was in the lead. “From home” meaning “away” was not dead yet; as late as 1952, the Los Angeles Times suggested as a Christmas gift “a train box,” or vanity case, “filled with luxurious items to make her beautiful when she is from home.” But it was rare enough to leave room for the new, modern sense to elbow its way in: By the mid-20th century, “working from home” could mean not “going out to work,” but “working (for pay) at home.”

And so a 1958 account in The New York Times quotes a woman telling a magazine columnist, “If you have ever talked to a woman whose husband works from home, you would soon realize that if he had not moved his job out from under foot, the woman would have.”

“Working from home” in this new sense took root quickly, but “working at home” was still the more common phrase until just a few years ago; a Ngram graph of the relative frequency of the two versions shows “from home,” trending upward, crossing the path of “at home,” which is losing altitude, around 2006.

But if the 20th-century “working from home” has a neat sociohistorical rationale, how do we explain the fact that it meant exactly the opposite — “working away from home” — at a time when not even a telephone linked the worker to home? And what’s the logic behind “bored of” for “bored by,” or “based off” instead of “based on,” or the British “different to”?

In fact, our language has often been shifty with its prepositions. “From” itself, the OED notes, was once used more widely in expressions of difference: It offers the 16th-century example “The elephant is a beast...little inferior from human sense” (spelling modernized), the 17th-century “others from themselves” (instead of “than”), and the 19th-century “foreign from all their experience” (where we say “foreign to”). It’s nice to have a plausible reason for usage evolution, but often we’re left with nothing more profound than that much-derided cliche: It is what it is.