No play-dates. Threatening to burn stuffed animals. How far is too far in the name of success? 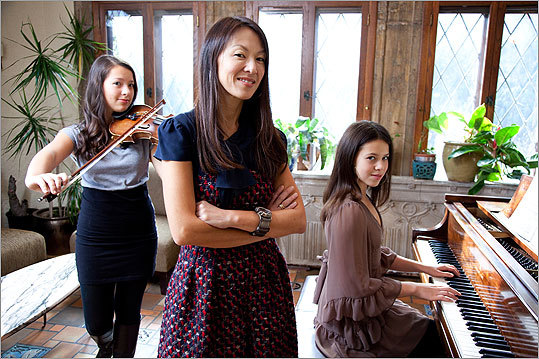 (Erin Patrice O'Brien for the Wall Street Journal) Amy Chua in her home in New Haven, Conn. with her daughters Lulu (left) and Sophia.
By Patricia Wen January 16, 2011

I needed a cool-down period after reading Amy Chua’s controversial new memoir of “Chinese” parenting in America today. And judging by the torrent of book reviews and impassioned reader reaction last week to “Battle Hymn of the Tiger Mother” — some calling it “racist,” others saying it explains China’s economic ascendancy — I know I am not alone.

The book tells how a high-energy Chinese-American woman who graduated from Harvard College and Harvard Law School, and who now teaches at Yale Law School, threw herself into raising two daughters with one iron-clad pledge: to never become one of those pushover “Western” parents.

Her memoir begins: “A lot of people wonder how Chinese parents raise such stereotypically successful kids. They wonder what these parents do to produce so many math whizzes and music prodigies, what it’s like inside the family, and whether they could do it too. Well, I can tell them, because I’ve done it.” And she goes on to say what her two girls were never allowed to do: attend a sleepover, have a play-date, participate in a school play, or get a grade less than an A.

The book has triggered fervent reactions from coast to coast, exposing the nation’s uneasiness over dictatorial parenting styles, not to mention ethnic stereotypes. Subliminally, perhaps, Chua has also tapped into the nation’s deep insecurities about how to make American children — and the country — thrive in this global competitive age. Excerpts of Chua’s memoir, crisp and well-written, appeared last weekend in The Wall Street Journal, and some 2,000 comments lit up the screen within the first two days. Many were intensely critical, and it’s easy to see why.

If Chua’s daughters balked at their mother’s relentless pressure to perfect a musical piece (the girls could choose between piano and violin, and daily practice sessions were up to two or three hours), Chua used methods that she claims came right out of the Chinese mothering toolbox: food deprivation, verbal abuse, barring bathroom breaks, and (take a deep breath) threatening to burn the children’s stuffed animals or donate a treasured dollhouse to the Salvation Army. (Nothing in the writing suggested this was a joke.) Though her two girls, now presumably teenagers, were standouts academically and musically, with her oldest girl even once performing in Carnegie Hall, her draconian tactics revolted countless readers — including me. I can state, without hesitation, that Chua is not the typical Chinese mother.

Yet, is there such a thing as a typical Chinese parent? And does that, in part, explain why Chinese and other Asian immigrants, disproportionately, excel academically in the United States? It is a question I have long pondered. I, too, graduated from Harvard, am the daughter of Chinese immigrants, and am the mother of three. I believe there is something about “Chinese” parenting, and some has to do with values that Chua describes — an emphasis on academic achievement, a no-pain, no-gain philosophy of life, and a strong deference to parents and teachers. But the best of “Chinese” parenting is not, nor has it ever been, a static set of behaviors with established dos and don’ts. Though some parents go to extremes, there is a strong tradition of trying to discern a child’s particular temperament — not all Chinese are meant to be brainy scholars — and adapting to it.

Chinese parenting, like all parenting, is an evolving, work-in-progress thing. And this is even more evident today as families in China — and their country’s leaders — wrestle with how they want to shape the next generation.

It is true that Chinese parents over history, on the whole, have been aggressively attentive to their children’s education. This stems from centuries-old traditions inspired by Confucius, the philosopher born in 551 B.C. His values and teachings were behind the creation around 600 A.D. of the all-important ancient Imperial Exam system.

For more than a dozen centuries, that national test was the gateway through which Chinese students, rich and poor, studied (and memorized) the Confucian classics and rose to the prestigious ranks of scholar-officials. This put a premium on academics. And because all good parents everywhere try to help their children triumph in the system that they are born into, Chinese parents coaxed their children to produce high exam scores.

This testing system was abolished around 1905, yet its legacy continues. In China today, the National College Entrance Exam, also known as gao kao, is the near-exclusive pathway to gaining admission to college. Rigorous testing and ranking is also done at elementary-school ages, and the best students go on to elite middle and high schools.

In other ways, too, Chinese parenting today remains deeply influenced by the image of the “cultivated” individual as described by Confucius. Students were to focus on, among other things, “Si Shu Li Yue” — poetry, books, decorum, and music. And Confucius also laid out strict rules about the social hierarchy that would create a good, harmonious society, including the debt that children and parents owe to their ancestors.

As part of this social order, children were also to honor parents — and teachers. But in return, parents were obligated to respect their children and guide their moral education. A common phrase in China is “fu ci zi xiao” which is widely interpreted to mean, “kind parent, filial child.”

The mind-set of many Chinese immigrant children — their value on education and respect for a teacher’s authority — made them “primed” to use the American educational system, said Marcel Suarez-Orozco, a cultural and social anthropologist who lead the Harvard Immigration Project, which followed some 400 newly arrived children from the Caribbean, China, Central America, and Mexico starting in 1997.

His research team found that the high-achieving immigrant students — and not just those from Asian countries — came from families with high “human capital,” such as parents with high levels of schooling and who could explain how to work the ladder-to-success system in their new land.

This meant that even if they didn’t speak English well, they knew it was the key to advancement and would aggressively study the language, said Suarez-Orozco, who codirects the Immigration Studies program at New York University. These high-performers also tended to come from more stable homes with at least two adults (not necessarily both parents), and at least one adult with earned income.

There is also little doubt that the disproportionate number of Asians occupying seats in the nation’s elite colleges today has much to do with the demographics of the most recent wave of Chinese immigrants. This was an exodus of relatively more educated and privileged Chinese — high in “human capital” — who fled the 1949 Communist Revolution.

Suarez-Orozco and other researchers say these factors — and not fanatical child-rearing practices — explain why Asian students often excel in school. Vanessa Fong, an associate professor from the Harvard Graduate School of Education, who is leading a study of Chinese children born under the one-child policy, says Chua’s self-described methods are over-the-top for Chinese parents of any generation. She put Chua at one end of a hypothetical 10-point scale.

Chinese parenting in America, however, is often misunderstood. Ruth Chao, a psychology professor from the University of California who studies Asian families, believes that the Chinese parent-child relations are too often seen, through the typical Western lens, as coldly authoritarian. She refers to the work of American developmental psychologist Diana Baumrind, who in the 1960s laid out three major styles of parenting: permissive (nonpunitive and accepting), authoritarian (control and absolute standards), and authoritative (direction with give-and-take warmth), which is described as the most optimal method. Chao sees Chinese parenting as emerging out of the authoritative school, though the give-and-take warmth is largely replaced by a kind of nurturing in which actions take on great symbolic import.

She said a typical Chinese parent stresses the importance of “guan,” which means as much to govern as to care for and nurture. Rather than saying “I love you” or giving a hug, a Chinese mother might show her affection by spending hours cooking a child’s favorite pork dumplings or ordering a child’s school textbook months before it is needed. And these parents do not make it a policy to “override” a child’s preferences, something Chua seems to think is a virtue, even if Chinese parents may feel they know what is best for their child for far longer than the typical American parent.

But Americans aren’t the only ones awash in self-doubt about how to raise children. Today’s Chinese parents are full of insecurities too; after all, the one-child policy has profoundly challenged the Confucian template for the family: Is the “little emperor” now the boss?

These Chinese parents are also beginning to question their system of advancement for children, particularly the high-pressure national test which determines college admissions. A re-thinking of the gao kao exam is underway. Leaders in Beijing know that rote memorization and exhaustive schooling does not lead to innovative thinkers. As Suarez-Orozco put it, “Can China produce the next Bill Gates or Mark Zuckerberg?”

But therein lies a profound quandary for the Chinese government. As the US education system shows, many of the best, creative, bold thinkers are students who are encouraged to take risks, make mistakes, and challenge authority. The modern American family, to its credit, tends to encourage that kind of experimentation. But can a political dictatorship really tolerate the messiness of creativity and fresh thinking by its young adults, the possibility that social unrest will come with the renewed energy? Fong also said her research has shown that today’s Chinese parents, often worry about their children’s emotional health. They hear about the youth suicides after the gao kao exam results are reported — and other signs of depression and anxiety among young adults. Most Chinese parents, with only one child, want their children to succeed, but not at all costs.

This has led me to wonder if, as the world shrinks, there will be a globalization of ideas around raising children. I see wisdom in the Chinese parenting mind-set that assumes authority in the early ages and doesn’t assign to children decisions or choices that are really over their head. Can 5-year-olds really know if they are better off in a private school or a nearby public school? Most young children feel more secure knowing a capable adult is in charge. But the worst of Chinese parenting can certainly take this control too far — and Chua admits to as much in the final section of her memoir.

Lulu, Chua’s feisty, youngest daughter, delivers the comeuppance that readers are waiting for. Increasingly asserting her independence and desperate to trade her violin for a tennis racquet, this girl challenges her mother in a climactic scene in a restaurant in Russia. Chua insists — I mean, orders — that the girl try caviar, saying if she doesn’t, she is “an uncultured savage” and a “barbarian.” The girl ultimately smashes a glass on the restaurant floor, sending Chua bolting out the door and into what she describes as a period of “humbled” soul-searching.

Chua — now a mother of a tennis-playing second daughter — describes herself as “newly accepting and open-minded.” Let’s hope that is true, and that the Tiger Mother has not just taken temporary refuge underground.

Patricia Wen covers children, family, and social service issues for the Globe, and can be reached at wen@globe.com. 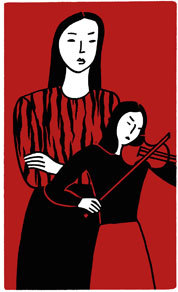 (Anthony Russo for The Boston Globe)