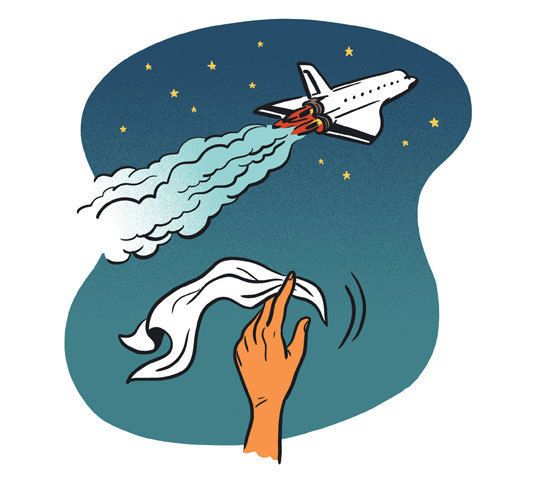 (Kyle Webster for The Boston Globe ) APRIL 1: The final mission of the Space Shuttle program is slated to begin today, delivering equipment to the International Space Station and bringing to a close NASA’s 30-year experiment in reusable launch vehicles. After the Endeavour’s final flight, the US space program begins the transition to private means of getting people into space, such as the rockets of the California company SpaceX.
By Samuel Arbesman January 2, 2011

What does 2011 hold in store? It may well start with a flashback. Remember the Y2K bug, when the world’s computers were expected to shut down because they couldn’t handle the “00” in 2000? There’s another one expected this year. It’s known as the Y1C problem, and although equally serious, it’s confined to the island of Taiwan, which uses a calendar that dates year 1 from the founding of the Republic of China in 1912. For many computers in Taiwan, 2011 is the year 100, and with the “00,” chaos may ensue.

If you’re writing that down, make sure your marker is honeysuckle, which Pantone has designated the color of 2011. The year has also already been proclaimed the year of forests and the year of chemistry by the United Nations. You’ll be able to book tickets to two places you’ve never been able to visit before: a massive new Legoland in Dubai and the abandoned city of Chernobyl, which opens to tourists this year. If you’re Canadian, you’ll be able to pay for these using Canada’s new plastic money, set to be released in the second half of this year.

What’s that? You didn’t have any of that on your calendar?

When looking forward to a new year, all too often we focus on the big and the obvious: elections, royal weddings, Harry Potter movies. But a year is much more than that: It’s one enormous landscape of exciting events you had absolutely no idea were about to occur. What follows is the Ideas guide to the year in the obscure and unexpected.

January Chernobyl begins to offer official tours for the first time since April 26, 1986, when the worst nuclear reactor explosion in history devastated the region and made the Ukrainian city a byword for techno-dystopian disaster. Tourists can see both the nuclear plant and the abandoned nearby towns. It’s reachable as a day trip from Ukraine’s capital, Kiev.

January Van Halen is expected to begin recording an album with, for the first time in more than 25 years, original singer David Lee Roth.

January 9 The world will gain a new nation if voters in Southern Sudan choose independence in a referendum that begins today. The youngest countries in the world currently are Curacao and the Republic of Kosovo.

January 11 The Dali Museum opens in St. Petersburg, Fla. It will be home to more works of Salvador Dali than any other museum in the world. Costing $36 million, it will house 2,140 pieces of art and is designed to withstand a category 5 hurricane.

January 12 A new $1 coin debuts in Plymouth, Mass., depicting the hands of Governor John Carver and Supreme Sachem Ousamequin Massasoit exchanging a peace pipe. It joins more than 1 billion dollar coins already minted. Though most Americans rarely see them in circulation, they are very popular in Ecuador, which began using the US dollar as its currency in 2000.

February 6 Super Bowl viewers can expect a General Motors ad for the first time since 2008, as the company bounces back from its government bailout and restructuring. Experts expect the ad will be for Chevy.

March 14 After months of delay, food obsessives will be able to buy “Modernist Cuisine,” the six-volume, 2,400-page magnum opus of Nathan Myhrvold, the founder of Research. Based on years of no-expense-spared experiments in food science by Myhrvold and his staff, the book will cost over $500 and involve such home-kitchen staples as centrifuges, hydrocolloids, and nitrous oxide capsules.

April 1 The final mission of the Space Shuttle program is slated to begin today, delivering equipment to the International Space Station and bringing to a close NASA’s 30-year experiment in reusable launch vehicles. After the Endeavour’s final flight, the US space program begins the transition to private means of getting people into space, such as the rockets of the California company SpaceX.

June 30 This is the next possible date when a leap second might be inserted in order to maintain the accuracy of atomic clocks. If the International Earth Rotation and Reference Systems Service decides the Earth’s rotation has slowed enough to require one, it would be the first leap second inserted since 2008.

June 30 “Extreme sailing” comes to America for the first time with a five-day competition in Boston. The event is part of a nine-race series held across three continents in which teams race high-tech catamarans, twice the size of Olympic sailboats, that are capable of sailing faster than the wind.

July 1 As of today, Kuwait can begin collecting $24 billion in war reparations from Iraq for damages caused by Saddam Hussein’s 1990 invasion and the Gulf War. The money was awarded by the United Nations, which had allowed Iraq to delay payments due to its rebuilding. The beginning of payments marks Iraq’s return, even if in a small way, to sound financial footing.

July 12 The planet Neptune completes its first full orbit since its discovery on Sept. 23, 1846. Neptune, which was discovered when astronomers calculated that the anomalies in the other planets’ orbits must be caused by a then-unknown eighth planet, takes more than 164 years to circle the sun.

September 3 The NCAA football season begins with one significant change in the rules: Taunting will now be severely punished. Players can now have a touchdown nullified for high-stepping into the end zone, pointing at their opponents, or engaging in other sorts of celebratory dancing as they score.

October 17 The 24th meeting of the General Conference of Weights and Measures begins in Paris, at which an international panel of specialists may consider redefining the kilogram. Currently the official kilogram is the weight of a physical cylinder of platinum and iridium stored in a basement vault outside Paris, whereas the meter is defined in terms of the speed of light. The method of the kilogram’s redefinition is up in the air, and could involve the mass of a sphere of silicon with an exact number of atoms, or precise amounts of electromagnetic energy.

October 21 The world ends today, according to the predictions of religious broadcaster, amateur biblical scholar, and civil engineer Harold Camping. In the case of this occurring, please disregard the remainder of this calendar.

November 23 Tentative release date for the first Muppet movie in more than a decade. Titled simply ”The Muppets,” it will star Jason Segel, who also co-wrote it, along with Paul Rudd, Amy Adams, and Sam the Eagle.

December The Tokyo Sky Tree is scheduled to be completed this month, becoming the tallest tower in the world at nearly four-10ths of a mile. Used primarily for broadcasting, it will still be shorter than Dubai’s Burj Khalifa, which is not technically a tower since it is habitable all the way to its top floors.

Samuel Arbesman is a postdoctoral fellow in the Department of Health Care Policy at Harvard Medical School and is affiliated with the Institute for Quantitative Social Science at Harvard University. He is a regular contributor to Ideas.