The rise of the right-wing children’s book 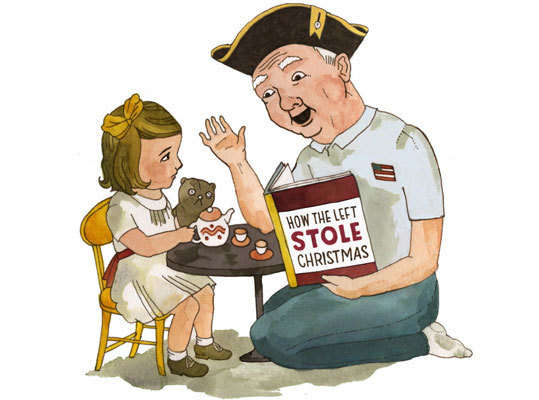 (Rachel Harris for The Boston Globe)
By Tom Scocca December 19, 2010

Or you can get last year’s “Help! Mom! Radicals Are Ruining My Country!,” in which Marxus Obandus tries to quash entrepreneurial children’s business dreams through excessive regulation. Or Glenn Beck’s picture book of his fable, “The Christmas Sweater.”

“It’s something that people are hungering for,” said Katharine DeBrecht, the author of “Help! Mom! Radicals Are Ruining My Country!” In 2005, DeBrecht’s first book, “Help! Mom! There Are Liberals Under My Bed!,” reached number one on Barnes and Noble’s website. Children’s books by and for conservatives — from major publishing house products to well-publicized vanity products — make up a fully functioning arm of the 21st-century conservative media, one that’s arm-wrestling with the liberal likes of “Heather Has Two Mommies.”

Children’s books with conservative themes “have made major headway” in American culture, Michelle Ann Abate said. Abate, a co-editor of the journal Children’s Literature and an associate professor of English at Hollins University, is the author of the newly published “Raising Your Kids Right: Children’s Literature and American Political Conservatism.” She sees conservative children’s books as a growing industry, and one that has become more overtly political, even as many liberals and academics overlook or underestimate their influence.

Children’s books have always tried to teach their young readers something. In her book, Abate notes that America’s first children’s book, the “New England Primer of 1688,” began with A for “In Adam’s Fall, We Sinned All.” There is a strain of conservatism built into most children’s literature — the books present an adult’s model of the world, as grown-ups want children to understand it: a world of stable institutions, instructive principles, and shared values.

But over the past half-century, that grown-up consensus has come to include an emphasis on values such as diversity, self-expression, pacifism, or ecoconsciousness more than piety, obedience, order, or patriotism. In this world, the Lorax, Dr. Seuss’s anti-industrial defender of the trees, is part of the establishment. So as conservative culture began to mobilize against what its members saw as a ruling liberal educational viewpoint, authors took to writing children’s books with explicitly conservative missions — friendly-faced armaments in the culture wars.

Abate said she became interested in the subject when she learned of the existence — and millions-selling success — of young-adult versions of evangelical minister and activist Tim LaHaye’s apocalyptic Left Behind novels. In the original series, after the Rapture carries away the most devout Christians, the wavering ones are left to discover true faith and to fight it out with the gathering forces of the Antichrist. In the young-adult novels, this battle is partly waged in the halls of high school. The junior account of the End Times ran to 40 titles in all, plus hardbound anthology editions and audio books. It was “undeniably a phenomenon,” Abate said.

That led her to look into the rest of a broad swath of children’s literature — including not only overtly religious or partisan books, but books designed to evoke a grand, ostensibly unifying traditionalism. The latter category drew such contributors as William F. Buckley, who produced a deliberately backward-looking National Review anthology in 2004 of children’s stories reprinted from the late 19th- and early 20th-century St. Nicholas Magazine. But the giant in the field is former secretary of education William Bennett and his various incarnations of “The Book of Virtues,” the collection of moralistic classics of children’s literature that first appeared in 1993.

Bennett’s Virtues anthologies — most recently 2008’s “Book of Virtues for Boys and Girls,” with a foreword by Doug Flutie — set out to promote old-fashioned values by collecting old-fashioned texts: stories, fables, poems, and nonfiction passages, proudly extracted from the deadest-whitest-malest part of the Western Canon. They have been a success not just with the book-buying public, Abate writes, but with teachers and school librarians in the educational mainstream, and they have become the “benchmark” for other writers. Bennett’s fellow inside-the-Beltway culture critic, former National Endowment for the Humanities chair Lynne Cheney, has come out with her own line of picture books (“America: A Patriotic Primer,” “Our 50 States”), supported by the old-line conservative think tank the American Enterprise Institute.

Some interest groups are more subtle than others. The National Oak Floor Manufacturing Association published its own children’s title, “Truax,” a rebuttal to “The Lorax,” in which a friendly logger explains why trees need to be cut down (and asks an intransigent environmentalist “How much will we pay? — To keep a few minnows from dying away?”).

Then there are the Help! Mom! books — besides “Radicals” and “Liberals,” DeBrecht has published “Hollywood’s in My Hamper!” and “The 9th Circuit Nabbed the Nativity!” — which feature political-cartoon-style caricatures of Hillary Clinton and Ted Kennedy. DeBrecht said that she wrote her first book after trying to explain the Bush-Gore election to her then-preschool-aged oldest son, and that she now uses her three sons as a “focus group” for her humor. Even so, the books appear to assume an exhaustive knowledge of right-versus-left cosmology — their target audience would seem to be children raised by the New York Post’s editorial board. “It’s hard to imagine that children that age would be savvy to all of these different references,” Abate said.

But the left also writes awkward, didactic books, including pro-Obama ones (“She didn’t vote for an aardvark...Mama voted for Obama!”). Dr. Seuss could get away with “The Lorax” and the antiwar “The Butter Battle Book” because he was a genius, not because peace and environmentalism were unassailable virtues. Anyone who’s suffered through a soggy ecofable like “The Last Bit Bear” (now celebrating more than 20 years of wistfully contemplating extinction) knows that ideology is a poor substitute for talent.

The real classics chew up their own agendas and swallow the bones. Who cares that “The Cat in the Hat” was a pedagogical experiment, a paradigm-changing demonstration of how few words a book could really use? Who cares, for that matter, what it says about anarchy and authority and keeping secrets from parents? Literature and children alike are resistant to forced interpretation.

If you’ve read C.S. Lewis — and the cultural right loves C.S. Lewis — pause now and envision the land of Narnia. Did you picture it covered with snow? Everyone does. Lewis spent seven books developing Narnia into an all-seasons landscape of ever-more elaborate Christian allegory. But what sticks is the image from the very first book, “The Lion, the Witch, and the Wardrobe” — the land of unredeemed, frozen fairy tale. Nothing in his dutiful theology can match the spell cast by the idea of a place where it is “always winter but never Christmas.”

Readers of “Little Women,” Abate said, identify with Louisa May Alcott’s independent, tomboyish Jo March — ignoring her later domestication and conformity, which were necessary to satisfy the conventions of Alcott’s day. Girls today, Abate said, “kind of push to the side the second half of the book.”

Around my house, “Bedtime for Frances” is a tactical manual for staying awake, not a story of why a little badger should go to sleep. A pre-feminist Richard Scarry can explain that Mommy Cat “earned” a new dress from Grocer Cat “by taking such good care of the house,” but my 3-year-old can memorize every detail of Scarry and still be unsurprised to see his own Mommy get up in the morning and go to work. There are messages, and then there are messages.

Tom Scocca writes the blog ”Scocca” for Slate.com. His first book, ”Beijing Welcomes You,” will be published by Riverhead in 2011.