John Lennon wasn’t the pacifist we’ve turned him into 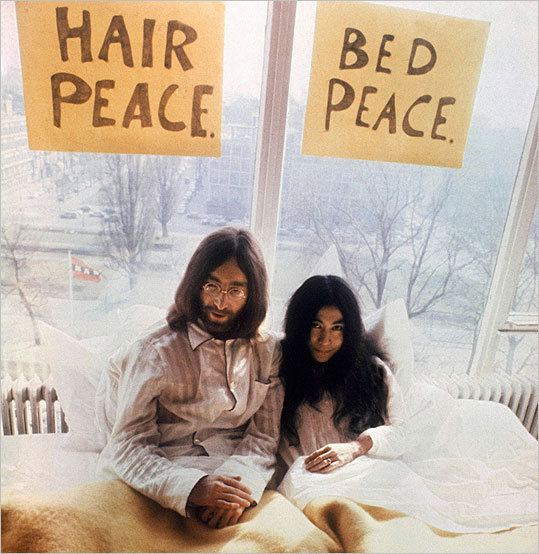 Of all the honorifics John Lennon amassed during his lifetime, he probably didn’t expect that he’d have a crater on the moon named after him. But last year, the International Lunar Geographic Society announced that a large depression in the moon’s landscape (almost four miles in diameter) would henceforth be known as the “John Lennon Peace Crater.”

Meanwhile, for two hours each night between Oct. 9 (John Lennon’s birthday) and Dec. 8 (the date he was killed), the Imagine Peace Tower, near Reykjavik, Iceland, beams a sharp blue light high into the sky in Lennon’s honor. And celebrations of Lennon’s utopian vision are hardly limited to the celestial realm. In Belfast, a man is currently crusading to make Lennon’s song “Happy Xmas (War is Over)” a worldwide number one hit before the new year. On the Web, fans have kept up a long-running petition supporting an international holiday for Lennon and his commitment to world peace. And last Oct. 9, when Lennon would have turned 70, Yoko Ono called upon his admirers to “Tweet a million wishes for peace for John’s birthday!”

Surely we’ll be hearing even more about Lennon as we approach the 30th anniversary of his assassination on Wednesday. At Strawberry Field, the landscaped memorial at Central Park situated across the street from the Dakota apartment building where he was shot, fans will gather around a mosaic of inlaid stones that spell the world “Imagine.” They’ll set up makeshift displays of candles, photos, and flowers, and they’ll sing anthems like “All You Need Is Love” and “Give Peace a Chance.” Lennon will be celebrated as a man who boldly proclaimed for peace in a world gone mad.

No doubt the tendency to remember Lennon in this way arises, at least in part, from a desire to underscore the tragedy and senselessness of his death. The idea that John Lennon, a man who stood for peace, was gunned down by a lunatic certainly makes for a powerful narrative. For many baby boomers, his assassination was a generation-shattering event (all the more so because it came about a month after Ronald Reagan was elected president). There is also no denying that in some of its iterations, the pacifism that Lennon championed can seem truly beautiful. So long as the world is plagued by hate and war, people are going to look fondly upon those who proselytize for peace and love.

Nevertheless, all of these well-intended tributes and vigils are off the mark. It isn’t just that they extol a naive style of pacifism (though there is that). They also ask us to genuflect before a highly idealized and simplified version of the slain Beatle. During his lifetime, Lennon was ambivalent about pacifism, and his public enthusiasm for the peace movement was fleeting and capricious.

Though he lived for 40 years, Lennon’s reputation as a peacenik derives from just a brief period in the very late ’60s and early ’70s, when antiwar attitudes were practically de rigueur among the hip cognoscenti. Until then, he had largely kept quiet about politics. The Beatles had originally fashioned themselves as bohemian, leather-clad rockers, but in early 1962, under the supervision of their savvy manager, Brian Epstein, they began styling themselves as teen idols. From then until Epstein’s death in August 1967, the group was under strict orders to avoid controversial statements of any kind, for fear of alienating part of their audience. Lennon may have been annoyed by this restriction, but for the most part, he acquiesced. In 1966, he provoked a minor controversy by letting it slip that the Beatles opposed the Vietnam War, but even then, he hardly sounded like an activist. “We don’t agree with it. But there’s not much we can do about it,” he said. “All we can say is we don’t like it.”

The peace protests that Lennon is best known for probably were not even his own ideas; more likely, they were Ono’s. In 1969, the couple staged their famous “Bed-Ins” for peace, sent “acorns for peace” to various world leaders, lobbied for peace while cloaked in a white canvas bag, and commissioned billboards in major cities across the globe, announcing “War Is Over — If You Want It.” Lennon lent a bit of his impish humor to these stunts, but (let’s face it), all of this was much more in keeping with the whimsically flavored avant-gardism for which Ono was already well known.

Then in 1972, Lennon abruptly terminated the activist phase of his career while under pressure from the Nixon administration. At the time, he and Ono were fending off a deportation order from the Immigration and Naturalization Service. Lennon’s lawyer, Leon Wildes, advised that under the circumstances, it might be wise for him to clam up about his political views, and that is precisely what he did. Plainly put, the couple decided they’d rather live in New York than continue speaking out against the Vietnam War. After Lennon got his green card in 1975, he could easily have returned to politics, but he retreated instead into quiet domesticity.

Finally, even during the era when Lennon was politically outspoken, his thoughts about pacifism were inconsistent. In May 1969, when the cartoonist Al Capp interviewed Lennon and Ono during their famous Montreal Bed-In, the couple seemed committed to an absolutist position.

“Tell me how you would stop [Hitler],” Capp demanded.

“If I was a Jewish girl in Hitler’s day,” Ono replied, “I would approach him and become his girlfriend. After 10 days in bed, he would come to my way of thinking. This world needs communication. And making love is a great way of communicating.”

When Capp fumed that this sounded like “stark raving madness,” Lennon shot back “What’s mad about it?”

In the spring of 1968, however, Lennon was much less settled in his views about political violence. That is when he recorded “Revolution,” a song that was widely interpreted as a celebration of the hippie counterculture, and a toxic put-down of the confrontational politics championed by some New Leftists, who had recently clashed with authorities in the streets of London and Paris (and would soon be causing a ruckus at the Democratic National Convention in Chicago). Most people are familiar with the version of the song that was released as a 45 rpm — the one that begins with Lennon screaming abrasively over heavily distorted guitars.

But in another, slower version of “Revolution,” which appeared on the White Album, Lennon added a word to the lyrics: “When you talk about destruction/ don’t you know that you can count me out — in.” He added the “in,” he explained, because he “wasn’t sure” where he stood on the crucial question of political violence — hardly the position of a pacifist.

In the same song, Lennon delivered a famous zinger against Mao Zedong, the ruthless Chinese leader who was being celebrated by a few ultra-militant factions in the youth rebellion. Though some saw Mao as a potent symbol of revolutionary culture, Lennon seemed unimpressed. “If you go carrying pictures of Chairman Mao/ You ain’t gonna make it with anyone anyhow.”

But by December 1970, Lennon was backpedaling again. Now he seemed highly skeptical of peaceful remedies for social change. “I really thought that love would save us all,” he told Rolling Stone’s Jann Wenner. “But now I’m wearing a Chairman Mao badge....I’m just beginning to think he’s doing a good job.” In retrospect, this sounds like the purest expression of radical chic. Lennon could not have known at this point that Mao was one of history’s greatest mass murderers. But nor could he possibly have believed that Mao was in any way a peaceful man. (“Revolution is not a dinner party,” Mao had famously said. “A revolution is an insurrection, an act of violence by which one class overthrows another.”) In the same interview, when asked about the possibility of a “violent revolution,” Lennon announced, “If I were black, I’d be all for it.”

Finally, it bears remembering that despite briefly campaigning for peace, and writing exuberantly about love, Lennon’s inner life was stormy and tumultuous. On this point, the historical record is so unequivocal that it is almost unseemly to delve into the details. Growing up, he is remembered as a garden variety, fist-fighting delinquent, and he continued in this vein until the first flush of Beatlemania. Armed with a caustic wit, he could be spectacularly cruel (particularly if he sensed weakness in any of his targets). With women, he was a notorious cad. By his own admission he was a lousy and distant father to his first son, Julian, and biographers agree that some of the storybook elements of his relationship with Ono are greatly exaggerated in the public’s mind.

None of this rests comfortably alongside Lennon’s reputation as a spokesman for nonviolence. But if people could bring themselves to delve a little deeper into Lennon’s life and thought, and stop dwelling on his soapiest platitudes from the Vietnam War era, they might still find his example instructive. One of the big themes of his career, after all, was his hostility to orthodoxies. This is a man who expressed cynicism about Jesus and his apostles, denounced the Maharishi as a fraud, and then, at age 31, turned his back on the Beatles.

Similarly, he never seems to have settled on a single viewpoint concerning pacifism, and at various other times, he found it personally necessary to mute some of his beliefs. But few of those who lived through the vertiginous ’60s are likely to judge him harshly on either count. His experience may even help us to understand just how harrowing and uncertain that decade was.

It’s harder to arrive at these insights, though, so long as Lennon’s admirers continue to freeze him in a brief moment of time when he was at his most gauzily idealistic. His stint as a carnival barker for the peace movement represents only a small fraction of his career. Everyone remembers one of Lennon’s most famous compositions, “Give Peace a Chance.” Another very good, but less heralded, song that he wrote, was called “Gimme Some Truth.”

John McMillian is an assistant professor of history at Georgia State University. His book ”Smoking Typewriters: The Sixties Underground Press and the Rise of Alternative Media in America” is being published in January by Oxford University Press. Currently he is writing a joint biography of the Beatles and the Rolling Stones for the Free Press.