Attention passengers: It’s perfectly safe to use your cellphones 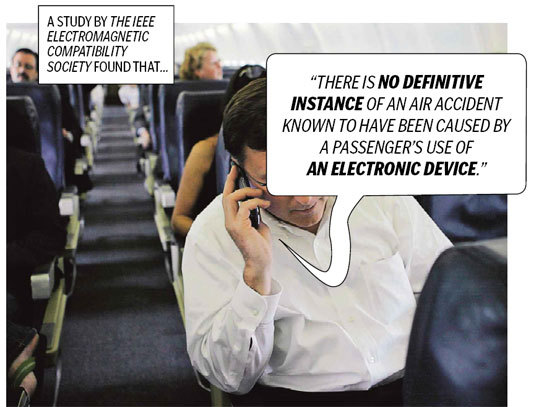 With more than 28,000 commercial flights in the skies over the United States every day, there are probably few sentences in the English language that are spoken more often and insistently than this: “Please turn off all electronic devices.”

Asking why passengers must turn off their mobile phones on airplanes seems like an odd question. Because! With a sentence said so often there simply must be a reason for it. Or — is there not?

Flight attendants are required to make their preflight safety announcement by the Federal Communications Commission because of “potential interference to the aircraft’s navigation and communication systems.” Perhaps this seems like a no-brainer: turning off your cellphone inside a piece of technology as sensitive as an airplane. In our civilized times, there are only a few things imaginable which more likely lead to direct physical conflict with the person in the seat next to you than turning on your cellphone during takeoff and nonchalantly calling your hairdresser to reschedule that appointment next Wednesday. In Great Britain, a 28-year-old oil worker was sentenced to 12 months in prison in 1999 for refusing to switch off his cellphone on a flight from Madrid to Manchester. He was convicted of “recklessly and negligently endangering” an aircraft.

Yet with people losing their freedom over the rule, it may come as a bit of a surprise that scientific studies have never actually proven a serious risk associated with the use of mobile phones on airplanes. In the late 1990s, when cellphones and mobile computers became mainstream, received reports from concerned pilots who had experienced system failures and suggested the problems may have been caused by laptops and phones the cabin crew had seen passengers using in-flight. Boeing actually bought the equipment from the passengers but was unable reproduce any of the problems, concluding it had “not been able to find a definite correlation between passenger-carried portable electronic devices and the associated reported airplane anomalies.”

The National Aeronautics and Space Administration released a study in 2003, stating that of eight tested cellphone models, none would be likely to interfere with navigation or radio systems of the aircraft — systems which are, of course, carefully shielded against all sources of natural or artificial radiation by design. Another study by the IEEE Electromagnetic Compatibility Society concluded in 2006 that “there is no definitive instance of an air accident known to have been caused by a passenger’s use of an electronic device.”

The same study also found that, on average, one to four calls are illegally made during every flight, meaning that there are tens of thousands of phone calls from American airplanes every day — and still no definitive evidence of a problem.

What makes the ban of mobile phones in the United States look even more odd is that it doesn’t exist in other parts of world. The European Aviation Safety Agency lifted the ban in 2007. “EASA does not ban the use of mobile phones on board as they are not considered to be a threat to safety,” says EASA spokesman Dominique Fouda. Several airlines like and Emirates have since allowed passengers to use their phones during flights. According to EASA, some American airlines will soon allow the use of cellphones outside of US airspace.

While the safety argument sounds like a neat story every passenger would understand, there seems to be a second, more important reason for the ban. According to the Federal Aviation Agency, the current ban by the Federal Communications Commission has not been issued for security concerns, but “because of potential interference with ground networks,” says FAA spokeswoman Arlene Salac. An airplane with activated mobile phones flying over a city could cause these several hundred phones to simultaneously log into a base station on the ground, perhaps overloading it and threatening the network.

Europeans seem to not worry about this problem, since European airlines allowing cellphones install base stations inside each aircraft, forwarding all calls through the plane’s satellite system, charging passengers by the minute. If all phones are logged into the base station on the airplane, they will not cause trouble on the ground.

But even if the FCC were to revoke the ban, the FAA’s current regulations for the certification of electronic equipment would apply. This would mean air carriers would have to show that every particular cellphone model is compatible with every particular airplane type. With hundreds of cellphone models released every year, this would mean a continuing source of cost for airlines, while the only benefit would be the convenience of passengers.

In the end, the ban of mobile phones on airplanes might not be a story about safety concerns, but about the psychology of governmental agencies. Bureaucracy, in theory, is designed to eliminate irrationality by replacing the biased judgment of individuals with a system of fixed requirements. Bureaucracies are machines to make judgments according to the best objective knowledge available. Given that, and the suspicion that the threat by mobile phones is indeed minor, how is it possible that two bureaucratic agencies, the FAA and the FCC, act with disproportionate caution? Is the apparatus not so rational after all?

“The point of bureaucracy is to have a less emotive discussion. But that doesn’t mean you get rid of that factor,” says Daniel Carpenter, professor of government at Harvard University.

When it comes to the question of allowing people to use their mobile phones, the bureaucratic incentive to do so could not be weaker. For any agency involved in this, two errors are possible. The first is what Carpenter calls an error of commission: The agency allows mobile phones and something bad happens, either an airplane crash or a network failure on the ground. The other possible error is one of omission: The agency fails to allow the use of mobile phones, though they are safe, and people subsequently cannot make phone calls while on the airplane.

“One of these errors is much more vivid and evocative. The error of not letting people talk on cellphones when they should — it’s hard to see people dying from that,” says Carpenter.

This suggests the most important reason mobile phones are still banned on airplanes might be the absence of anger — the fact that passengers are not organizing and demanding the right to make calls.

Still, there might be yet another way of thinking about the issue. Despite the current ban, Congress debated the “Halting Airplane Noise to Give Us Peace Act” (also known as the “Hang Up Act”) in 2008, prohibiting all voice communications on commercial flights. The bill was never voted on, but the reasoning behind it was simple: No calls in airplanes, not because the calls are dangerous — but because they are so annoying.

Justus Bender is a reporter with Die Zeit, a weekly newspaper based in Hamburg, Germany.