A psychologist’s new look at why we choke under pressure, and what we can do about it

Some people thrive on pressure--doing their best work when deadlines loom, always craving an audience, suggesting that a $20 bet will make the next game of pool ”more interesting.” But for the rest of us, high stakes can sometimes be a real handicap, no matter how much we’ve practiced, rehearsed, or studied. It’s go time. But for some reason, we stop. In short, we choke.

Chokes can happen in an instant, like a grounder rolling through Bill Buckner’s legs. Or they can unfold slowly and inexorably, like the 2004 . Either way, the memory is indelible. We watch big-time chokes with morbid fascination, and feel the small-time ones as agonies of self-defeat.

When it happens, the moment can seem so improbable and uncontrollable that we are tempted to see jinxes and curses at work. But, according to University of Chicago psychologist Sian Beilock, choking is rooted in science, not the supernatural--as are techniques to avoid it. In her lab, Beilock ratchets up the pressure on subjects performing all sorts of cognitive and athletic tasks while sampling their stress hormones and scanning their brains. She has found that worry can turn our strengths--such as superior reasoning skills or a supportive crowd--against us.

In her new book, ”Choke” (Free Press, September 2010), Beilock argues that doing well under pressure begins with understanding the demands that different types of performance make on the brain. For example, success on a math exam or a business presentation requires sustained focus, and worries can distract us. By contrast, athletes and musicians do better when they let their well-practiced skills run on autopilot. Too much focus can trip them up. In that case, when the stakes are high, a little distraction could be helpful.

Beilock sees choking at work beyond the bright lights and cheering crowds. She sees it lurking behind everything from plane crashes to racial achievement gaps in education to the relative lack of women pursuing math and science careers.

To learn more about choking under pressure, Ideas reached Beilock by phone at her Chicago office, told her the clock was ticking, and demanded answers.

BEILOCK: I wouldn’t go that far. But there are traits that can make people more susceptible to poor performance in pressure situations. Surprisingly, one is having a lot of working memory, what I call cognitive horsepower.

Doing academic tasks in our lab, we’ve found that people with the most thinking and reasoning power report the same levels of stress as people with lower cognitive horsepower, and they show similar stress-hormone levels, but they lose the most in their performance when we raise the stakes and up the pressure. That’s because they are used to relying on their superior thinking and reasoning power for demanding academic tests, instead of using shortcuts, and that working memory gets zapped by pressure and worry.

IDEAS: How does that translate onto the playing field?

BEILOCK: There are a lot of examples in athletics where people try to flex their prefrontal cortex, where working memory is housed, and it slows down and mucks up well-practiced skills that are better run on autopilot using procedural memory.

There is a study with collegiate baseball players in a batting cage where pressure is increased by telling them that they’re being videotaped and that their coaches are going to watch the videos and analyze how they performed. After a couple bad swings, the players started paying more and more attention to the mechanics of their swing and tinkering with things and it snowballed. So, sometimes it’s better to turn off your prefrontal cortex.

BEILOCK: It can start with how people are taught skills. For example, there’s work suggesting that it’s better to teach beginner golfers to putt without as much reliance on explicit working memory, thinking, and reasoning skills. Also, having too much time can be detrimental. In my lab, we’ve worked with skilled golfers on a putting task and shown that speeding them up a bit, having them go a bit faster than they normally would, can prevent this sort of paralysis by analysis….Finally, you can give yourself something else to focus on to redirect your prefrontal cortex. This can range from counting backwards by threes to focusing on a one-word mantra that encapsulates a swing, like ”smooth,” to singing a song to yourself.

IDEAS: Singing to yourself could also psych out your opponent.

IDEAS: To me, the most quintessential chokes occur right at the cusp of victory.

BEILOCK: Often in these situations, people start worrying about the consequences of not pulling out a victory, and having this immediate evidence of failure can be enough to start the choking process in full motion.

IDEAS: But you also write about choking that’s triggered just by the expectations of others, specifically stereotypes. How so?

BEILOCK: Whether you’re trying to get a college scholarship or a job in an interview, your performance can be hurt when you’re worried about confirming a negative stereotype about your gender or race, or another group to which you belong. You don’t have to endorse the stereotype. If you worry that other people believed in it, then it lingers in your head.

IDEAS: So how do we regain control?

BEILOCK: Instead of trying to suppress negative thoughts, some of the damage can be repaired when people focus on positive aspects of themselves, or just allocate attention to something other than a worry or a negative stereotype. For example, getting Asian women taking a math exam to focus on the fact that they’re Asian rather than that they’re women can increase their scores. Techniques like meditation can train our minds to focus on what we want to focus on in stressful situations. Writing about your worries before you perform can also be helpful.

IDEAS: That last one seems counter to the idea of avoiding negativity.

BEILOCK: Yeah, but there’s something about writing. It’s as if when people put this stuff down on paper, they’re sort of cognitively outsourcing their worries.

IDEAS: Have any practice tips?

BEILOCK: You can never mimic the type of pressure in practice that you’ll feel when things are actually on the line, but there’s a lot of research showing that just getting a little stress in practice is enough to get accustomed to it in the really pressure-filled situations when it counts the most. One thing practicing under pressure can do is to help you interpret these physiological stress reactions, like sweaty palms or a racing heart, as no big deal or even as a cue to excel.

Chris Berdik is a freelance journalist in Boston. 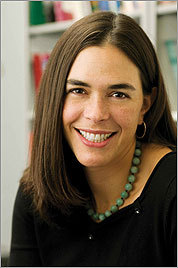