When left is right 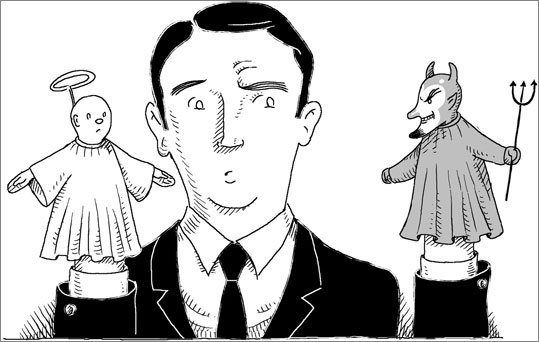 (Wesley Bedrosian for The Boston Globe)
By Kevin Lewis August 29, 2010

Right is right, left is wrong. Because most people are righthanded, this bias has become customary. Thus, according to a recent paper, “the Latin words for right and left, dexter and sinister, form the roots of English words meaning skillful and evil, respectively,” and “according to Islamic doctrine, the left hand should only be used for dirty jobs, whereas the right hand is used for eating,” and “the left foot is used for stepping into the bathroom, and the right foot for entering the mosque.” But what do lefthanders think? The authors of the paper compared the gestures made by the presidential candidates in the final debates of the 2004 and 2008 elections to the phrases that were spoken at the same time. John McCain and Barack Obama, who are both lefthanded, preferred their left hands for positive comments and their right hands for negative comments, while the pattern was reversed for George W. Bush and John Kerry, who are both righthanded.

Casasanto, D. & Jasmin, K., “Good and Bad in the Hands of Politicians: Spontaneous Gestures during Positive and Negative Speech,” PLoS ONE (July 2010).

Couples therapy
Some marriages are healthier than others, both figuratively and literally. A team of researchers observed the social interactions of several dozen married couples. The researchers also collected blood samples from everyone and created small blisters on each person’s forearm, and then monitored the healing process. The level of two hormones (oxytocin and vasopressin) in a person’s blood was associated with both the quality of that person’s marital communication and how quickly that person’s wound healed. Those with higher levels of these hormones were more positive and less negative with their partner and exhibited faster wound healing.

Teen sex and TV
As long as humans have communicated, they have probably debated the question of whether kids are influenced by lurid content. The issue is a big part of the culture wars and is especially acute in the age of cable TV and the Internet. However, a reanalysis of data from a widely cited study suggests that lurid media content may be getting too much blame. The original study in the journal Pediatrics surveyed hundreds of middle-school students about their media exposure and virginity and followed up with them two years later. Although the authors of the original study claimed to find an effect, the authors of this latest analysis — using a “more stringent approach” — found no effect of media exposure on the age when adolescents began to have sex. Instead, it appears that the kind of adolescent who has sex at an earlier age also just happens to be the kind of adolescent who consumes lurid media content.

The prejudice of the times
In this country, most discussions about race are concerned with blacks and Latinos. Blacks still confront the legacy of slavery, while Latinos are at the center of the immigration debate. Another group, Asian-Americans, has seemingly managed to stay above the fray. But is this wishful thinking? Perhaps, according to a new study. After reading an editorial about the economic downturn, participants became more prejudiced against Asian-Americans, but not against blacks. An editorial about global warming didn’t have the same effect. The authors attribute this to the perception that Asian-Americans are more of a competitive threat with regard to jobs and other economic resources.

Slogan backlash
A slogan is a set of words designed to influence your thoughts. You know this, and, according to a new study, your subconscious does, too. In fact, your subconscious tries to employ its own reverse psychology. When people were asked to remember slogans related to saving money, they were inclined to spend more later on; likewise, when remembering slogans related to spending money, people were inclined to spend less. However, brand names seem to get the job done: People spent less after being asked to remember a brand related to saving money, and people spent more after being asked to remember a brand related to spending money. So perhaps every company should have a brand like Tiffany and a slogan like “Every Day Low Prices.”