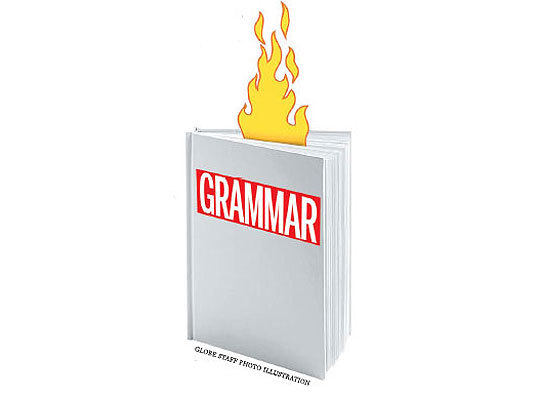 Another school year, another set of writing assignments: Students of all ages will soon be composing papers on summer vacations, the Chinese economy, or the heroines of Henry James. And beginners or veterans, these student writers all risk exposure to usage myths — bogus rules of English they may hear, or read, or suddenly discover (via a teacher’s red pen) that they’ve violated.

Fake language rules can come from respected sources, but that’s no reason to believe them. As Kathryn Schulz explains in her new book, “Being Wrong,” people don’t know that they’re misinformed: Being wrong, after all, feels just like being right. But learning to write is hard enough without the burden of following non-rules. So let’s lighten the load a bit, starting with 10 usage topics that deserve a good leaving alone.

None are? None is? They’re both correct; none has meant both “not one” and “not any” for more than 1,000 years. During the past century though, a few usage writers have fretted about it, arguing that making none always singular would be etymologically and aesthetically preferable. Their reasoning was faulty, and they haven’t made a dent in usage, but the singular superstition hangs on somehow. Let’s not encourage it.

The girl that I marry. No, it doesn’t have to be whom I marry. “People that has always been good English,” notes Bryan Garner in Garner’s Modern American Usage, “and it’s a silly fetish to insist that who is the only relative pronoun that can refer to humans.” Choose who if you like, but to claim that using that “makes a person seem less human,” as Mignon Fogarty suggested in a Grammar Girl podcast — that’s just looking for trouble.

Since you asked. It’s totally legit to use since for because, unless it would cause ambiguity. Since has had its causal sense, as well as its temporal sense, from the beginning.

Healthy choices. Many of us have been taught that it’s healthy people but healthful foods. But according to the Oxford English Dictionary, healthy meant both “hale” and “wholesome” from the time it arrived in English in the mid-16th century. More than 300 years later, an American usage critic proposed limiting healthy to living things; his idea has ardent supporters, but in practice, healthy has always been preferred to healthful.

“Till” was there first. In recent decades, somebody launched the mischievous rumor that till is a substandard form of until. In fact, till is ancient English, and until was formed by combining on and till. If you want to disparage a member of this family, go with ’til, the entirely superfluous 20th-century addition.

Verbing nouns. Your teacher hates to see nouns used as verbs? So that teacher never hammers, brakes, weeds, elbows, or trashes anything? Verbing nouns is standard procedure in English. We may dislike new verbs, especially if they seem like in-group jargon (incent, effort, unfriend, tweet). But you can’t predict which ones will have legs: The verbs progress, contact, and experience were scorned in their youth, and look at them now.

“And” can start a sentence. So can But and However. One theory is that teachers ban the and opening for kids of Tooth Fairy age so they can’t just string together a series of “and then” sentences, thus planting the idea that it’s forbidden. But anyone old enough for Harry Potter should be able to handle the truth.

Misspelled is not misused. Errors like “faster then a speeding bullet” and “taking a lot of flack” are mistakes in spelling, not comprehension. But you’ll often see them flagged as “confusions,” as if the writer truly didn’t know the meanings of then and than. The confused person here is the critic, who fails to distinguish a spelling goof from a true word mix-up like flaunt for flout. Learn to spell, by all means, but don’t fall for this sort of violation inflation.

The adverb can be “wrong.” The usage czar of the Telegraph in London recently chastised a reporter for using the construction “spelled it wrong.” But the reporter had it right: He spelled it wrong, it’s tied too tight, she drives too slow — all these adverbial forms are fine. Once there were more “flat adverbs” — identical to the adjectives, lacking the “ly” ending — but “two centuries of chipping away by schoolmasters and grammarians” has taken its toll, says Merriam-Webster’s Dictionary of English Usage. Flat adverbs: Get ’em while you can!

You only live once. Spotting “misplacements” of only is a hobby for some picky readers — they’d rewrite that sentence as “you live only once,” so there’s no way to misinterpret it. Yes, there are times when moving the only can change the meaning of a sentence. But can you show me a published example of a misplaced only causing genuine confusion? I offered readers that challenge in 2001, and it still stands. Other usage critics, including H.W. Fowler (1926) and Bergen Evans (1957), have also pooh-poohed the only alarmists — though Garner’s 2009 usage tome still argues for strict enforcement. Until there’s evidence of harm, though, I say a normally worded sentence should get the benefit of the doubt.