In those old dark days before the Internet (and before Twitter!), if you were stumped on a question of style, or puzzled as to how to use a word, you pretty much had a single option: Look it up in a book.

Mostly that book was “the dictionary,” unless you were erudite enough to have Fowler’s Modern English Usage lying around, or the Merriam-Webster Dictionary of English Usage. The really hard-core might have a copy of the Chicago Manual of Style or Garner’s Modern American Usage. But still: one book, maybe two, to satisfy every question you might have about word use in English? The Internet came none too soon.

There are now plenty of well-established sites for those interested in discussing questions of meaning, usage, pronunciation, and style. And just in the last couple of months, we’ve seen several great new resources come online — Web pages, blogs, and Twitter feeds. If you wanted, you could spend all day hopping from one to another. Here are a few worth your attention.

The Economist, that venerable magazine (which calls itself a newspaper, which is itself a usage question), recently relaunched its language blog, Johnson (named after Samuel, of course). Johnson, which originally ran as a column in the magazine from 1992 to 1999, concerns itself with the “effects that the use (and sometimes abuse) of language have on politics, society and culture around the world” and covers plenty of topics of interest to readers of this column, including presidential use of possibly-offensive words, the verbing of nouns, and the word “halfalogue” to refer to the familiar annoyance of hearing only half of a cellphone conversation. The Economist’s style guide is also online, and is written in the same style as the magazine, with lovely, take-no-prisoners sentences such as “To write Washington and Moscow now differ only in their approach to Havana is absurd” and “However, it is often possible and even preferable to phrase sentences so that they neither give offence to women nor become hideously complicated.”

The website of the British newspaper The Guardian has also made its style guide available online, and it recently joined Twitter (@guardianstyle) to parcel out bite-size style nuggets, such as “moon walk — what Neil Armstrong did; moonwalk — what Michael Jackson did.”

Twitter has become a hotbed of word and language advice lately. All the usual suspects now have Twitter accounts: @MerriamWebster, @CambridgeWords, and @OEDOnline (as well as the dictionary site I run, @Wordnik). A new addition is the Subversive Copy Editor, @SubvCopyEd, the Twitter feed of Carol Fisher Saller, the author of the book of the same name and the editor of the online Q&A for the Chicago Manual of Style. (The CMOS, as it is familiarly known, is also available online by subscription only, but the Q&A is free.) In preparation for the 16th edition of the CMOS, she’s been tweeting “sneak peeks” of new style guidelines forthcoming in the new edition, such as “Possessives of classical proper names ending in an eez sound add apostrophe-s (Xerxes’s armies).”

Other usage mavens on Twitter include @EditorMark, an Ohio-based copy editor, and @GrammarMonkeys, the copy editors at the Wichita Eagle. Ben Zimmer, who recently took over William Safire’s On Language column in The New York Times, has set up a separate Twitter account just for column updates, @OnLanguage. There’s also @Copyediting, the Twitter feed of Copyediting Newsletter, which posts advice geared more towards professional copy editors, such as “Be careful when a state abbreviation is also a word itself — like ‘Ark. flood.’ ”

Another great usage website — not new, but less well-known outside of journalism circles — is the Columbia Journalism Review’s Language Corner. Helmed by Merrill Perlman, the legendary former director of The New York Times copy desks, it is always well-informed, pithy, and fun to read. The Language Corner helps with topics such as whether careful writers really need to follow trademark owners’ guidelines for use of their trademarks (nah — they can only suggest, not enforce, so it’s OK to write Taser instead of TASER), or the difference between proven and proved.

With all these different sources at our fingertips, it’s tempting to think that the there’s always a quick route to “the” answer online. But the very multiplicity of places to find answers — and the often inside-baseball look at the issues that even professional editors struggle with — points up an important fact about English usage and style: It’s often purely a matter of taste.

No usage expert has all the answers. And as more and more voices join the conversation, we’re seeing the world of usage advice change from “you must say it this way” dogmatism to something more akin to music or film reviews: a variety of knowledgeable people offering themselves as guides, walking readers through an arena where there’s plenty of room for debate. 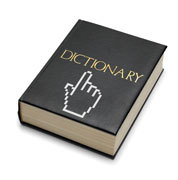 (iStock photo/Globe Staff illustration)
Your comment is subject to the rules of our Posting Policy
This comment may appear on your public profile. Public Profile FAQ