How America got its name

The surprising story of an obscure scholar, an adventurer’s letter, and a pun 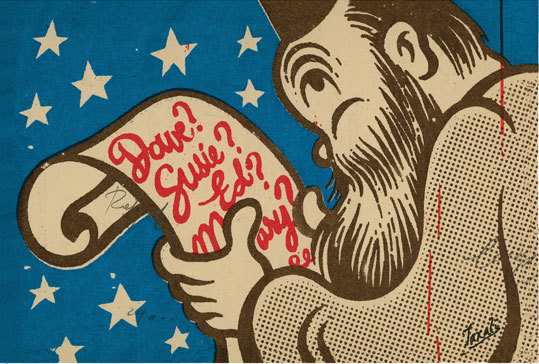 Each July 4, as we celebrate the origins of America, we look back ritually at what happened in 1776: the war, the politics, the principles that defined our nation.

But what about the other thing that defines America: the name itself? Its story is far older and far less often told, and still offers some revealing surprises.

If you’re like most people, you’ll dimly recall from your school days that the name America has something to do with Amerigo Vespucci, a merchant and explorer from Florence. You may also recall feeling that this is more than a little odd — that if any European earned the “right” to have his name attached to the New World, surely it should have been Christopher Columbus, who crossed the Atlantic years before Vespucci did.

But Vespucci, it turns out, had no direct role in the naming of America. He probably died without ever having seen or heard the name. A closer look at how the name was coined and first put on a map, in 1507, suggests that, in fact, the person responsible was a figure almost nobody’s heard of: a young Alsatian proofreader named Matthias Ringmann.

How did a minor scholar working in the landlocked mountains of eastern France manage to beat all explorers to the punch and give the New World its name? The answer is more than just an obscure bit of history, because Ringmann deliberately invested the name America with ideas that still make up important parts of our national psyche: powerful notions of westward expansion, self-reinvention, and even manifest destiny.

And he did it, in part, as a high-minded joke.

Matthias Ringmann was born in an Alsatian village in 1482. After studying the classics at university he settled in the Strasbourg area, where he began to eke out a living by proofing texts for local printers and teaching school. It was a forgettable life, of a sort that countless others like him were leading. But sometime in early 1505, Ringmann came across a recently published pamphlet titled “Mundus Novus,” and that changed everything.

The pamphlet contained a letter purportedly sent by Amerigo Vespucci a few years earlier to his patron in Florence. Vespucci wrote that he had just completed a voyage of western discovery and had big news to report. On the other side of the Atlantic, he announced, he had found “a new world.”

The phrase would stick, of course. But it didn’t mean to Vespucci what it means to us today: a new continent. Europeans of the time often used the phrase simply to describe regions of the world they had not known about before. Another Italian merchant had used the very same phrase, for example, to describe parts of southern Africa recently explored by the Portuguese.

Like Columbus, Vespucci believed the world consisted of three parts: Europe, Africa, and Asia. He also knew that the world was round, a fact that had been common knowledge since antiquity. This meant, he realized, that if one could sail far enough to the west of Europe, one would reach the Far East.

This was exactly what Vespucci and Columbus both believed they had done. Columbus, in particular, clung doggedly until the end of his life to the idea that in crossing the Atlantic he had reached the vicinity of Japan and China. He had no idea he had expanded Europe’s geographical horizons, in other words. He thought he’d shrunk them.

The expanding horizons began with Vespucci. In his letter, he reported sailing west across the Atlantic, like Columbus. After making landfall, however, he had turned south, in an attempt to sail under China and into the Indian Ocean — and had ended up following a coastline that took him thousands of miles almost due south, well below the equator, into a region of the globe where most European geographers assumed there could only be ocean.

When Ringmann read this news, he was thrilled. As a good classicist, he knew that the poet Virgil had prophesied the existence of a vast southern land across the ocean to the west, destined to be ruled by Rome. And he drew what he felt was the obvious conclusion: Vespucci had reached this legendary place. He had discovered the fourth part of the world. At last, Europe’s Christians, the heirs of ancient Rome, could begin their long-prophesied imperial expansion to the west.

Ringmann may well have been the first European to entertain this idea, and he acted on it quickly. Soon he had teamed up with a local German mapmaker named Martin Waldseemüller, and the two men printed 1,000 copies of a giant world map designed to broadcast the news: the famous Waldseemüller map of 1507. One copy of the map still survives, and it’s recognized as one of the most important geographical documents of all time. That’s because it’s the first to depict the New World as surrounded by water; the first to suggest the existence of the Pacific Ocean; the first to portray the world’s continents and oceans roughly as we know them today; and, of course, the first to use a strange new name: America, which Ringmann and Waldseemüller printed in block letters across what today we would call Brazil.

Why America? Ringmann and Waldseemüller explained their choice in a small companion volume to the map, called “Introduction to Cosmography.” “These parts,” they wrote, referring to Europe, Asia, and Africa, “have in fact now been more widely explored, and a fourth part has been discovered by Amerigo Vespucci....Since both Asia and Africa received their names from women, I do not see why anyone should rightly prevent this from being called Amerigen — the land of Amerigo, as it were — or America, after its discoverer, Americus.”

Libraries today attribute this little book to Waldseemüller. But the work itself actually identifies no author — and Ringmann’s fingerprints, I would argue, appear all over it. The author, for example, demonstrates a familiarity with ancient Greek, a language that Ringmann knew well and that Waldseemüller did not. He also incorporates snatches of classical verse, a literary tic of Ringmann’s. The one contemporary poet quoted in the text, too, is known to have been a friend of Ringmann.

Waldseemüller the cartographer, Ringmann the writer: This division of duties makes sense, given the two men’s areas of expertise. And, indeed, they would team up in precisely this way in 1511, when Waldseemüller printed a new map of Europe. In dedicating that map, Waldseemüller noted that it came accompanied by “an explanatory summary prepared by Ringmann.”

This question of authorship is important because whoever wrote “Introduction to Cosmography” almost certainly coined the name America. Here again, I would suggest, the balance tilts in the favor of Ringmann, who regularly entertained himself by making up words, punning in different languages, and investing his writing with hidden meanings. In one 1511 essay, he even mused specifically about the naming of continents after women.

The naming-of-America passage in “Introduction to Cosmography” is rich in precisely the sort of word play Ringmann loved. The key to the passage is the curious name Amerigen, which combines the name Amerigo with the Greek word gen, or “earth,” to create the meaning “land of Amerigo.” But the name yields other meanings. Gen can also mean “born,” and the word ameros can mean “new,” suggesting, as many Renaissance observers had begun to hope, that the land of Amerigo was a place where European civilization could go to be reborn — an idea, of course, that still resonates today. The name may also contain a play on meros, a Greek word sometimes translated as “place,” in which case Amerigen would become A-meri-gen, or “No-place-land”: not a bad way to describe a previously unnamed continent whose full extent was still uncertain.

Whatever its meanings, the name America filled a need. By the middle of the 16th century it had caught on, and mapmakers were using it to define not only South but North America. But Ringmann himself didn’t live to see the day. By 1511 he was complaining of weakness and shortness of breath, and before the year’s end he was dead, probably of tuberculosis. He hadn’t yet reached 30.

Both Ringmann and Waldseemüller soon slipped into obscurity. The two would remain forgotten for centuries, but Waldseemüller’s star rose again in the 20th century, thanks to the accidental rediscovery, in 1901, of the sole surviving copy of his great map. A century later, calling it America’s birth certificate, the Library of Congress bought the map for the astonishing sum of $10 million — and in 2007, to celebrate the 500th anniversary of the naming of America, put it on public display. Waldseemüller now seems guaranteed permanent celebrity as the author of one of the most important documents ever created.

History hasn’t served poor Matthias Ringmann nearly as well. That doesn’t seem quite fair. So tonight let’s send up a few of our fireworks in honor of the man who had the audacity to declare, before anybody else, that the world had a fourth part — and to imagine that he might be the one who could give it a name.

Toby Lester is a contributing editor to The Atlantic and the author of ”The Fourth Part of the World,” which comes out in paperback on Tuesday. For more about the book and the Waldseemüller map, see www.tobylester.com.