The clamor of modern medicine can actually make us worse. So how do you write a prescription for shhh? 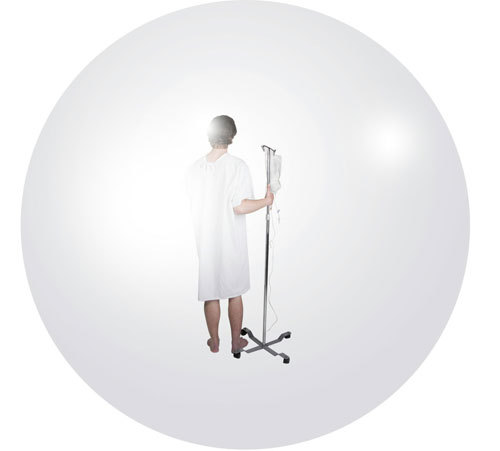 Close your eyes and think of a hospital. There’s the antiseptic smell, the cool, climate-controlled air, the bright lights glinting off linoleum. And then there are the sounds: squeaky-wheeled gurneys, banging doors, ringing phones, the banter of nurses and doctors, the studio audience on the TV above the next bed, the blurting from the overhead PA system as people are paged, and the beeps and buzzes and whirrs and whooshes of the ubiquitous monitors and machinery.

Hospitals are loud. And while all that noise was once just seen as a perfectly tolerable byproduct of high-tech healing, a growing body of research suggests that the noise itself actually harms patients, interfering with the healing process, increasing the likelihood of medical errors, and raising the stress levels of everyone on the premises. Studies have shown that patients sleep poorly and take longer to recover from surgery in noisier hospitals and that loud neonatal wards may delay development in premature babies. Wounded rats heal more slowly in noisy environments; heart patients in loud wards are more likely to be rehospitalized later. By interrupting sleep and increasing stress, noise batters the body.

In response, doctors, nurses, engineers, and architects are rethinking the hospital, both its design and its routines. Recent years have seen a burst

of experimentation to address the cacophony, with solutions ranging from sound-absorbing paneling and new wheels on gurneys to eliminating overhead paging, culling extraneous alarms from monitors, and carving out blocks of daily undisturbed “quiet time” for patients. The most successful of these measures are now spreading, helped along by regulatory changes — earlier this year, the federal guidelines that shape building codes across the country were revised to include, for the first time, binding limits on hospital noise.

“There are several vectors driving this, and they all point to the fact that A, people don’t like [hospital noise], and B, it’s bad for you,” says David Sykes, a consultant who cochaired the committee that revamped the federal hospital guidelines. “Noise levels in hospitals are twice what they were a few decades ago. They’re approaching the level of harm, and they’re definitely at the level of stress.”

The fight to quiet the hospital is part of a growing appreciation of the ways that hospitals themselves can be unhealthy for patients: While focusing on one problem, they can expose patients to others, such as infections, drug errors, and stressful, invasive care at a time when they are at their most vulnerable. That newfound awareness is being driven by a movement within the medical community to better understand how health and recovery are affected by all kinds of factors beyond the moment when a doctor operates or a patient takes medication. It’s an idea that made its way into some of the pilot programs in the health care bill President Obama signed into law this spring.

The antinoise campaign also emerges from a concerted effort on the part of doctors, nurses, and hospital administrators to listen more closely to their patients. This new trend toward “patient-centered care” has been fed in part by changes in the way medical care is paid for, and in part by a longstanding shift in the top-down hierarchy of traditional medicine. The things patients complain about, like excessive noise, may be more than a nuisance. They may actually be bad for their health.

Health care was not always so loud. Virgil, in “The Aeneid,” called medicine “the quiet art,” and for millennia the sick ward was a hushed environment. In a quote beloved by today’s hospital noise reformers, Florence Nightingale, in her 1859 “Notes on Nursing,” described unnecessary noise as “the most cruel absence of care which can be inflicted either on sick or well.”

Hospitals enjoyed special attention from the American antinoise campaigners who emerged in the early 20th century to try to quiet the nation’s fast-growing cities. According to “The Unwanted Sound of Everything We Want,” a just-published meditation on noise by Garret Keizer, a New York organization called Society for the Suppression of Unnecessary Noise had children swear pledges to not play loudly near hospitals. By mid-century the “Quiet Hospital Zone” sign was a familiar part of the landscape.

What those early campaigners could not foresee was that the greatest threat to hospital quiet would come not from without but from within. The main culprit in this long crescendo was the proliferation of hospital gadgetry — machines that vastly increased the abilities of nurses and doctors to diagnose and cure ailments, but that also, either usefully or not, made noise. There were other factors, too: Hospital airflow standards increased over the years, forcing hospitals to pump more air through their ducts than they had been built to handle, creating a low-level background roar. And the number of people working in hospitals kept increasing: more administrators and assistants for the paperwork, technicians to run and fix all the machines. That meant more people talking and barking orders and being paged.

“There’s more traffic, more players,” says Susan Mazer, who runs a company called Healing HealthCare Systems that works with leading hospitals on noise issues. “It used to just be the nurses and the doctors, now you have phlebotomists, lab technicians, administrators, transport.”

The change has been stark. In 2005, a team of researchers at Johns Hopkins University led by the engineers Ilene Busch-Vishniac (now the provost at McMaster University) and James West looked at the best available historical data and found that, since 1960, the average daytime noise level in hospitals had doubled. At night, it was four times louder.

Noise feeds on itself. The louder it gets, the louder people have to talk to be heard, and the louder the alarms and pages have to be to be heard over everything else. Indeed, one of the concerns that hospital noise reformers talk about is privacy: the fact that, in order to understand each other, doctors and patients sometimes have to raise their voices even when talking about sensitive medical information.

When patients are asked about their experience in hospitals, noise routinely tops the list of complaints, and evidence has slowly accumulated that it’s not just an annoyance, it’s a health hazard. A 1968 study found that patients in loud hospital wards require more pain medication than those in quiet wards. Medical researchers in a 1976 study found that loud construction work across the street from the University of Minnesota Hospital increased the amount of time it took patients there to recover from cataract surgery.

The evidence has grown in recent years. Doctors have found evidence that the noise in neonatal intensive care units elevates blood pressure, decreases oxygen saturation, and may impede development and contribute to hearing loss in premature infants. Multiple studies have shown noise-related delays in wound-healing in mice and rats.

Too much noise may also be compromising the ability of doctors and nurses to do their jobs properly. The death of a heart patient at Massachusetts General Hospital earlier this year after the volume on a heart-rate monitor was turned off highlighted the national problem of “alarm fatigue,” when medical personnel, overwhelmed by the constant ringing of alarms all around them, turn them off or simply stop noticing them. A set of auditory perception experiments published earlier this year by a team led by Bruce Lambert of the University of Illinois, Chicago found that noise levels similar to those in hospitals led clinicians to confuse similar-sounding drug names with each other.

As it becomes increasingly clear that hospitals need to dial back their noise, the challenge is doing that without compromising the efficacy of all the life-saving machinery and activity that creates it.

Johns Hopkins Hospital enlisted Busch-Vishniac and West to figure out how to quiet its buildings. A big part of the problem, the engineers decided, was the acoustics of the rooms and hallways. Hospitals walls, floors, and ceilings are traditionally bare and smooth so that they can be washed and kept as sterile as possible. As a result, they reflect sound rather than absorb it.

Busch-Vishniac and West’s solution: a new kind of wall paneling that could both dampen sound and meet hospital standards for sterility and washability. According to West, the installation of the first panels was an immediate success.

“Once we did the one ward, the staff from the other three wards demanded the same treatment in their wards,” he recalls.

Other hospitals are focusing on behavioral changes as well. Some of the leaders are local: A research team at Cambridge Hospital installed sound-monitoring devices called Yacker Trackers — originally designed for classroom use by elementary school teachers — at nursing stations to get the hospital staff who gathered there to be more aware of the volume of their voices.

Mass. General began a noise-reduction program in 2008, with quiet rubber wheels for hallway carts, new limits on overhead paging, and headphones for patients instead of blaring TVs. A few Midwestern hospitals have begun installing in their neonatal wards a system of crib-mounted microphones and sound-level meters, designed by an Indiana company called Sonicu, with color-coded lights that warn when the room gets too loud.

Another measure that Mass. General and other hospitals are experimenting with is something called, simply, “quiet time” — an hour, once a day (and in some hospitals also once a night), during which the lights are dimmed, bedroom doors closed, and patients are given 60 minutes without a doctor or nurse coming by to ask them something or check in.

While the logistics of arranging the call schedules of doctors and nurses and technicians to actually carve out this hour are inevitably complex, the experiment has proven enormously popular with patients, says Tracy Jacobs, a director at the Cambridge-based Institute for Healthcare Improvement, which has worked with hospitals to institute quiet time programs.

The shift toward quieter hospitals might be sped along by positive results. And while it’s early yet, a few hospitals are reporting quantifiable benefits. According to Mazer, after one of the units at Karmanos Cancer Institute in Detroit installed acoustic paneling and decentralized its nursing stations to prevent large groups of people talking near patient rooms, it reported a 30 percent drop in medical errors. A recent study of cardiac patients in Sweden found that those in rooms with sound-absorbing ceiling tiles were less likely to be later readmitted than those in traditional, louder rooms.

The challenge is to create a “culture of quiet,” as Jeanette Ives Erickson, the chief nurse at Mass. General and the leader of its noise reduction program, puts it. Part of that culture is created by measures like acoustic tile and TV headsets, but it also requires a willingness to find ways to leave patients in peace and let them heal.

“We didn’t all grow up in health care understanding that quiet helped to create a healing environment,” she says. “So that’s a real culture change.”