This Is Not a Weed

Plants that spontaneously grow in the city are marvels of adaptation. What can we learn from them? 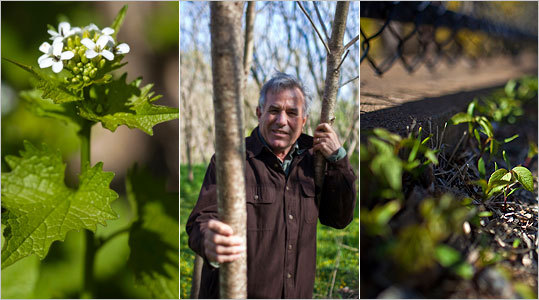 (Aram Boghosian for The Boston Globe)
By Courtney Humphries May 23, 2010

What makes a plant worth our admiration? Peter Del Tredici, a senior research scientist at the Arnold Arboretum, walks up a short grassy hill near the South Street Gate and points to what he considers to be the Arboretum’s most amazing tree: the dwarf beech, a tree seemingly born from a German expressionist landscape, its knobby branches folded into a series of right angles that create a canopy resembling barbed wire. It’s one of many impressive trees in the Arboretum’s 265 acres in Jamaica Plain, which are carefully managed by a team of professional horticulturists.

But on this sunny spring afternoon, Del Tredici is interested in a far less spectacular destination: an area just outside the gate across South Street known as Stony Brook Marsh, where untamed vegetation grows atop an abandoned trash heap. On one side, a brackish pond is filled with invasive phragmitis reeds. On the other, a hillside of rubble has been colonized by a haphazard forest of thin trees. Along the path, stalks of Japanese knotweed poke insistently from the ground. It’s filled with species that are often called “invasive,” “noxious,” and “weed,” the kinds of plants that conservationists rail against and homeowners consider unsightly.

But the very characteristics that most people deride are ones that Del Tredici admires. He calls this area an “emergent forest,” an ecosystem formed spontaneously without the help of human hands. Those thin trees, for instance, are ailanthus trees, featured in the book “A Tree Grows in Brooklyn” — planted originally for ornamental purposes, but now flourishing on their own because of their ability to grow by cloning themselves at the roots. “I don’t think anybody has planted an ailanthus tree in 100 years, yet it is the most common tree in most northeastern cities by a long shot,” Del Tredici says. The phragmitis reeds, which also fill the Back Bay Fens, are able to thrive in highly degraded wetlands like this one, where they help clean polluted water.

What some people see as a collection of undesirable plants, Del Tredici views as a valuable ecosystem that’s unique to the hostile habitat of the city. He’s the author of a new field guide, “Wild Urban Plants of the Northeast,” that focuses exclusively on species like these, the hardy and self-sufficient plant life that grows spontaneously in cities. Though the book is primarily a catalog of plants, Del Tredici also sees it as part of a deeper argument: that there’s a lot more value in these plants than we give them credit for.

“I consider ‘weed’ to be a politically incorrect term,” he says. “There is no biological definition of the term weed. It’s really a value judgment.”

If we saw this motley collection of plants differently, Del Tredici suggests, we’d realize they’re a kind of marvel: living things in the harsh and stressful urban landscape that don’t just survive there, but thrive. With no effort on our part, they fill the city with greenery, providing cleaner air and water, shade, and food and habitat for wildlife. They do it without expensive fertilizers and irrigation. It’s time, he suggests, that we learned to embrace them — to stop thinking of them only as weeds to uproot, and start considering what they have to offer.

When most of us think about the urban landscape, we tend to fall into one of two worldviews. One is what you might call the traditional gardener’s approach, cultivating attractive ornamental plants while eliminating weeds — think of Boston’s Public Garden, or a carefully landscaped front yard. More recently, a new idea has gained ground: to reflect the natural landscape by planting native vegetation, while eliminating alien species.

Del Tredici is offering an entirely different philosophy. Nothing is native to the city, he argues. The modern city is a new kind of habitat — one that provides pockets of livable spaces in surroundings that can be harsh, inhospitable, and polluted. The city habitat is so specialized, our divisions of “native” and “invasive” plants doesn’t really apply here. Instead, the plants that grow and thrive here could be considered the natural denizens of a new kind of habitat — what he calls “cosmopolitan” species. Like the human residents of Boston, many have immigrated from other parts of the world to coexist in a single community. “You can in many cases get as much functionality out of a cosmopolitan group of plants as you can out of a native group of plants,” he says.

In his quest to better understand urban plants, Del Tredici explored corners of the city that held habitats less obvious than open spaces like Stony Brook Marsh. As we exit onto Washington Street, we find a less hospitable environment — a spit of dirt at the entrance of the stone gate, where some greenery has managed to grow.

“Look at that spectacular dandelion,” he says, bending down and plucking a plump saucer-shaped flower from the ground.

The loose soil at the gate is home to a modest garden of what most people would call weeds: dandelions, chicory, mugwort, butter and eggs — all scrappy plants that grow stubbornly in pockets of land that no one is responsible for. At some point, he says, “someone will weed-whack all of this.”

Because most of us see these bits of greenery as aberrations, we don’t appreciate these small spaces for what they are: micro-environments that manage to support an entire specialized ecosystem. A few feet away, he points to tiny maple seedlings pushing out of the dirt surrounding a concrete light post. Further down, he finds a Virginia creeper growing along a chain-link fence — which happens to be a wonderful habitat for plants, he points out, because it gives them a protected place to grow.

Fences, pavement cracks, railroad tracks, highway medians — these are specialized habitats that humans create, and they offer niches where certain plants thrive. Many of these plants are “pre-adapted” to the urban environment. Species that grow in sidewalk cracks, for instance, originally grew in the cracks of cliffs and other marginal areas. Other urban plants are accustomed to rough conditions, and can survive being stepped on or attacked repeatedly by maintenance crews. Butter and eggs, also called yellow toadflax, originally grew in open grasslands, sand dunes, and gravelly soils; in the city, it readily sprouts up in cracked asphalt, vacant lots, rubble piles, and roadsides. Some plants are native to areas with challenging chemical conditions, and they can tolerate the pollution in city soils and waterways, and the salt that leaches off roads. Their toughness means that we can still maintain greenery in places we’ve made inhospitable to most plant life.

Like any other plants, these species are consuming carbon dioxide, producing oxygen, creating shade, and serving as food and habitat for wildlife. Even mugwort, which he calls “the quintessential urban weed,” absorbs heavy metals from the ground, prevents erosion on slopes, and helps populate barren, nutrient-depleted soils. And they do it all without help. By contrast, “the Arboretum looks the way it does because we have 15 people who come in every day” to maintain it, Del Tredici says.

After spending more than three decades at the Arboretum focusing on the kinds of plants that people use to beautify landscapes, Del Tredici began turning his attention to this so-called spontaneous vegetation, prompted by the interest of his students at the Harvard Design School, where he is a lecturer. “Even though it’s a very common and very important part of the city, nobody pays much attention to it,” he says. His students calculated that spontaneous vegetation covers about 10 percent of the land in Somerville.

With all the interest in sustainability these days, he argues, nothing is more sustainable than landscapes that grow on their own. For that reason, spontaneous vegetation could be an attractive alternative for landscape design: It conserves water and other resources, and it’s affordable for cities with diminishing maintenance budgets.

In his book and lectures, Del Tredici proposes an approach to urban wild spaces that is less about planting and more about editing, in which plants are allowed to grow naturally and then only maintained minimally to weed out truly undesirable species, like vines that choke out other plants.

Although it’s hard to imagine such an approach being implemented in high-profile spots like the Public Garden, it could be a way to boost the city’s plant cover in spaces that are open but unmanaged — for instance, vacant lots that are not currently in use. Del Tredici also proposes creating what he calls “spontaneous roofs,” in which soil on a roof is allowed to self-colonize with plants — a low-maintenance alternative to planted green roofs that only requires occasional weeding.

His ideas aren’t an easy sell with the professional landscapers who look after parkland in and around the city. Bree Harvey, a spokesperson at Mount Auburn Cemetery, says, “We have to keep the place looking the way all the people who have purchased grave space here expect it to look.” Dennis Collins, the cemetery’s horticultural curator, says that there are also historical and cultural regions for preserving the space, which is designated as a National Historic Landmark, from encroaching weeds. “We’re not a natural area; it’s 170-plus years of managed landscape,” he says.

Jeremy Dick, a horticulturist for Boston Natural Areas Network, known as BNAN, says that while Del Tredici’s ideas makes sense and offer potential benefits for urban spaces, implementing them would require major shifts in attitude. “Land stewards and conservationists in the future will need to overcome their bias toward these plants to appreciate them,” says Dick. Many of the urban plants Del Tredici talks about are alien to the area, and these people have been trained to view all invasive species in a negative light.

Dick says that BNAN, which owns or helps to manage several community gardens, urban wilds, and greenways in the Boston area, often receives complaints from residents if an area becomes too weedy or unkempt. When people see spontaneous plants springing up, they see a mismanaged area and start to worry that it invites trash-dumping, or crime.

Del Tredici is aware that he faces an uphill battle. We can’t escape the fact that neatly trimmed rose bushes signal wealth and safety, while dandelions poking out of asphalt cracks are signs of poverty and neglect. Even if weeds are a symptom of urban blight, not the cause, it would take quite a campaign to disconnect the two in people’s minds. Del Tredici himself admits that features like spontaneous roofs have a slim chance of being widely accepted in the United States. However, there are small signs of change. At Mount Auburn Cemetery, Collins says that landscapers have begun to phase out pesticide use on the grass in recent years, resulting in lawns that are marbled with dandelions and clover. “People are getting used to a different concept of turf; they’re not expecting the perfect golf course in quality,” he says.

As Del Tredici and I walk back through Stony Brook Marsh, we stop to look at the smooth, undulating trunks of the ailanthus trees — which although not as dramatic as the dwarf beech, are striking in their clonal similarity. I ask him if he looks at plants like this and sees beauty. “I’m open-minded about beauty,” he answers. It may take a while before the rest us catch up.

Courtney Humphries is a freelance science writer and the author of ”Superdove: How the Pigeon Took Manhattan...And the World.”

Also on The Angle: Finance reform: not a 'triumph'