People generally think of discrimination as a manifestation of negative attitudes about another social group. Yet, in the case of gender discrimination, it can also be motivated by ostensibly benevolent attitudes, with the aim of protecting women. Though perhaps not as offensive as hostile sexism, new research finds that benevolent sexism can damage a woman’s career, too. In surveys, women managers reported having fewer challenging experiences and less negative feedback in their jobs, something that may hinder their opportunities for development and advancement. In experiments, men who held paternalistic attitudes towards women were less likely to recommend challenging experiences for women subordinates.

Educated smokers quit sooner
A new analysis of smoking suggests that educational background is a critical component of people’s health, affecting how quickly new ideas are acted on. On Jan. 11, 1964, the surgeon general issued the first widely publicized report about smoking’s negative health effects. By analyzing data collected from pregnant women between 1959 and 1966, two researchers found that educated women cut back their smoking almost immediately on the release of the surgeon general’s report, while less educated women actually increased their smoking. This divergence of smoking rates — and the associated rate of newborn health problems — between people of different educational backgrounds continued all the way up until the mid-1980s, when the rates began converging. The effect of education was amplified by the level of education of one’s community, such that educated people surrounded by other educated people were especially likely to quit.

Aizer, A. & Stroud, L., “Education, Knowledge and the Evolution of Disparities in Health,” National Bureau of Economic Research (March 2010).

What video games do to judgment
Though not yet up to the standards of the Matrix movies, video games are becoming increasingly realistic. This has prompted many studies of whether video games induce violent behavior, but an even broader question is whether experience with video games can skew judgment. In a new experiment, researchers asked people to play True Crime, a game where the player is a police officer who must catch as many criminals as possible, by any means necessary. After two hours of play, participants were asked to judge real-life cases where either a civilian or a police officer had committed a particular crime. Compared to people who hadn’t played the video game, those who had were significantly more lenient on the police officers.

E-mail makes lying easier
If you’ve ever caught yourself writing something on the Web or in an e-mail that you would never have written in a letter, you’re not alone. A recent study confirmed that people are more willing to bend the truth in e-mail. In one experiment, anonymous business students were asked to divvy up an imaginary pot of money between themselves and another person. Students who were required to submit their decision by e-mail were more likely to misrepresent the size of the pot than students who were required to submit their decision using pen and paper. Likewise, in an experiment involving real money and without anonymity, business managers misrepresented the size of a pot of money in an e-mail communication more than they did in a paper communication.

The war really did come home
What is the true cost of war? The psychological trauma that many Vietnam combat veterans experienced led some of them to violence in civilian life. An economist analyzed survey and personnel data on Vietnam veterans and found that combat exposure increased their propensity for subsequent violent acts. The economist also estimated the social cost of this post-combat violence to be around $65 billion in 2007 dollars.

Rohlfs, C., “Does Combat Exposure Make You a More Violent or Criminal Person? Evidence from the Vietnam Draft,” Journal of Human Resources (March 2010). 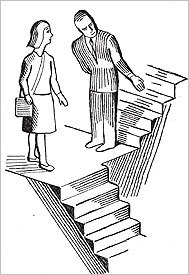 (David Suter for The Boston Globe)
Your comment is subject to the rules of our Posting Policy
This comment may appear on your public profile. Public Profile FAQ