It's time to consider alternative paths to peace 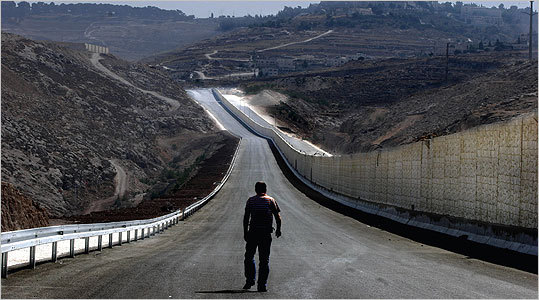 (Rina Castelnuovo/New York Times ) A man walks down the Israeli side of a divided highway around Jerusalem in 2007.
By Sasha Polakow-Suransky May 16, 2010

“I think this is a very big deal,” President Clinton declared to a group of American Jews and Arabs after the legions of photographers left the White House grounds on Sept. 13, 1993. However, Clinton warned, it would take commitment and hard work to guarantee that the historic Israeli-Palestinian Accord signed that day would “truly be a turning point.”

It has been almost 17 years since Yasir Arafat and Yitzhak Rabin shook hands in the White House Rose Garden, setting in motion a process that was supposed to end the conflict for good. The agreement Clinton envisioned was relatively simple: Two states for two peoples. Israel would largely withdraw from the territories it has occupied since 1967, while retaining a few large settlement blocs within the West Bank and compensating the Palestinians with a similar amount of land from Israel proper. This two-state solution respects the fundamental tenets of Zionism — by allowing Israel to remain a Jewish-majority state — and satisfies moderate Palestinians’ nationalist ambitions by creating a national home for 4 million stateless Palestinians. It has guided western policy ever since.

But the two-state solution has not worked, and there is a growing fear that it never will, despite the resumption last week of indirect talks. Israel withdrew from the Gaza Strip in 2005 only to see the Islamic fundamentalist party Hamas take control of it, sending rockets into Israeli cities across the border. Meanwhile, Israel has continued to expand settlements in the West Bank, making the possibility of a territorially contiguous Palestine seem more remote than ever. With over 300,000 settlers in the West Bank today — compared to just over 100,000 in 1993 — many analysts on both sides believe that the settlements have become too entrenched and inextricably tied to Israel proper for the government to realistically evacuate all or most of its citizens, even if Israeli forces withdraw. Still, because negotiators on both sides and officials in Washington are so well-versed in two-state diplomacy and have been working for years to bring such a solution about, it remains the default option even as logistics conspire to make it impossible.

“Everyone agrees that we are very likely reaching a point where the two-state solution finally becomes impossible,” says Israeli journalist Dmitry Reider. “But they simultaneously refuse to discuss any ideas about what to do once we get there.”

But if the two-state solution fails and there are no meaningful alternative plans on the table, the prospect of all-out violence looms. Secular Palestinian leaders, discredited for failing to deliver statehood, would likely be discarded in favor of extremists. Meanwhile, Israel might simply opt to impose a border unilaterally, a move that could jeopardize its existing peace treaties with Jordan and Egypt and provoke violent Palestinian resistance. This would likely take Israel and its neighbors back to the state of on-and-off war that existed during the 1970s. With Plan A on life support and a grim future on the horizon, the time has come to consider alternatives, as unorthodox as they may be.

The most popular of these alternatives — one country for two peoples — strikes fear into the hearts of Israelis and committed Zionists worldwide. They have long dreaded the idea of a single state for both the Jews and the Palestinians, for reasons of simple demographics: If Jews become a minority, the Zionist dream is over. The Israeli government is acutely aware that if it does not relinquish control over the West Bank and the Palestinian population expands, Jews will eventually become a minority governing over a majority and the “apartheid” label that Israel’s critics have long sought to tag it with will begin to stick. In February, Defense Minister Ehud Barak presented the dilemma facing Israel in stark terms: “As long as between the Jordan and the Sea there is only one political entity, named Israel, it will end up being either non-Jewish or non-democratic....If the Palestinians vote in elections, it is a binational state; and if they don’t vote, it is an apartheid state.”

If Barak’s first scenario comes to pass — a state that is democratic but not Jewish — there would be several possible ways to organize it. One would be a consociational democracy, a la Switzerland, with autonomy for regional and linguistic minorities and proportional representation of all groups. Another would be a Belgian-style federation of Jews and Palestinians in which each community has an autonomous government but a strong central government exists to resolve issues affecting both communities. Or there could be a purely majoritarian democracy: one person, one vote, and a single, centralized government.

Support for some kind of single-state solution is growing among Palestinians and even being grudgingly considered by some Israelis. Although the Palestinian Authority officially remains in favor of two states, Palestinian Authority negotiator Ahmed Qureia suggested as early as 2004 that Palestinians would “go for a one-state solution in which the Palestinians have the same rights as Israelis” if the alternative required settling for small noncontiguous pockets of land. An April poll conducted by An-Najah National University in Nablus revealed that only 28 percent of Palestinians are prepared to accept an independent Palestinian state within the 1967 borders, as envisioned in the two-state model; many are instead entertaining the idea of demanding voting rights within Israel.

Even though that strategy terrifies most Zionists, some notable right-wing Israelis are starting to break the one-state taboo as well. Likud Party Knesset member Tzipi Hotovely has been pushing for a plan that avoids the evacuation of West Bank settlements, granting Palestinians Israeli citizenship if necessary. And on April 29, the Likud Party Knesset speaker Reuven Rivlin told the Greek ambassador that he “would rather see Palestinians as citizens of this State than partition the land.”

Others propose the reverse: allowing Israeli settlers to stay in Palestine. There would be two states, but no one would be required to move when the borders are drawn; the settlers could simply become minority citizens of the new state. Permitting settlers to remain in West Bank enclaves — even if those areas become part of Palestine — would allow Israel to avoid that drama of uprooting its own citizens from their homes. Many Palestinians bristle at the notion of rewarding Israel for decades of settlement expansion, which they regard as illegal. These moral objections notwithstanding, high-level Palestinian officials are taking the idea seriously. Qureia, the lead Palestinian negotiator, has explicitly proposed such an arrangement. He told the Israeli daily Haaretz in 2009, “Those residents of Ma’aleh Adumim or Ariel who would rather stay in their homes could live under Palestinian rule and law, just like the Israeli Arabs who live among you. They could hold Palestinian and Israeli nationalities. If they want it — welcome.”

An even more radical idea has been put forward by Swedish diplomat Mathias Mossberg and UC-Irvine professor Mark LeVine. They do not believe giving settlers Palestinian passports would solve anything. The two propose creating overlapping states between the Jordan River and Mediterranean Sea, delinking the concept of state sovereignty from a specific territory. There would be an Israel and a Palestine, but rather than divide the land, the two states would be superimposed on top of one another. The plan would permit individuals to live where they wish and choose their political allegiance. This, they argue, would resolve the seemingly intractable questions of how to divide the holy city of Jerusalem and whether to allow Palestinian refugees “the right of return” to their old communities.

It is a creative and theoretically attractive solution because it doesn’t require forcing people from their homes or drawing new borders. However, their plan overlooks the near-total lack of trust between the two communities and is vague on the maddeningly complicated questions of jurisdiction that would arise, for example, in the case of a crimes involving both Israelis and Palestinians. Former US ambassador to Israel Daniel Kurtzer regards the idea as a waste of time, arguing: “This is not a conflict where untried experiments in political science should be tried on the ground.”

With the two-state solution on life support and the Palestinian Authority and Hamas still at odds in their respective fiefdoms, Israeli government officials are contemplating a three-state model. The plan would essentially formalize the current status quo of a Hamas-ruled Gaza, a nominal Palestinian Authority state in most of the West Bank, and Israel within its 1967 borders plus a few annexed settlement blocs. James Zogby of the Arab-American Institute insists that this would never be sustainable because Palestinians would not allow Gaza to remain “a reservation of poverty, despair, and anger.” Still, with no sign of a reconciliation between Hamas and the Palestinian Authority, and the refusal of Hamas to acknowledge Israel’s right to exist, some in the Israeli government believe maintaining the status quo is the easiest option.

Last week, Israelis and Palestinians resumed so-called proximity talks, with American mediators shuttling back and forth because the two parties will not meet each other face-to-face. None of these ideas will likely be on the agenda. The United States is still a firm believer in the peace process, and the two-state solution remains an article of faith in Washington and among regional experts.

But as facts on the ground gradually extinguish the possibility of a two-state deal, the unorthodox options deserve consideration, if only as a glimpse into what the future may hold. Moreover, the specter of a one-state solution could soon be invoked as a threat in negotiations if Palestinians do not see a viable independent state on the horizon.

Meanwhile, officials like Barak, who warn ominously that Israel will sink into apartheid, are doing little to encourage the territorial concessions necessary to steer Israel away from that perilous course. Pleased with a booming economy and an absence of suicide bombings, the Israeli government appears to be in no rush to seal a comprehensive deal, believing that the status quo can hold for several years. But not forever. Ironically, when that time comes, the Israeli officials who talk of three states as a stopgap measure and claim they are working to create two coexisting side-by-side in peace and harmony, could soon find themselves left with only one — the scenario they have always dreaded.

Sasha Polakow-Suransky is a senior editor at Foreign Affairs and author of ”The Unspoken Alliance: Israel’s Secret Relationship with Apartheid South Africa.”