THIS STORY HAS BEEN FORMATTED FOR EASY PRINTING
Let us now praise...

My wife’s voice on the cellphone was urgent, exhilarated: A huge leak had occurred, a massive rupture in the system, and now there was no drinking water. Her response had been immediate and characteristic: Rather than ambling down to the corner store and grabbing a few supplementary bottles of Poland Spring, she had driven in a kind of rapture to Star Market — where the line was long, and the atmosphere crazed — and thrust herself into the middle of events. She must have mineral water by the caseload. She was prepared to fight for it, if necessary. She was alive, alert, glowing. A Mineral Water Riot, indeed — a scuffling or throwing-down in the aisles, with raised voices and red faces and a clash of trolleys — would have delighted her.

I like to think that Walker Percy, the 20th anniversary of whose death we celebrated last week, was watching my wife from the balconies of the afterlife — gratified, nodding his lean, bald, doctor-novelist’s head. Percy was American literature’s great philosopher of breakdown, of the redemptive properties of the mildly cataclysmic. Binx Bolling, the narrator of his first novel, “The Moviegoer,” tooling down the Gulf Coast in his red MG with a gorgeous girl in the passenger seat, is gratefully rescued from “the malaise” by a minor car accident. Will Barrett in “The Last Gentleman” is a devotee of disaster: “It appeared to him that not just he but other people too felt better in hurricanes.” And in his post-self-help book “Lost In The Cosmos,” Percy explored the potential benefits to the reader of getting shot in the armpit by “a young insane person, totally unknown to you, driv[ing] slowly past your house in an ancient VW.”

For Percy, the modern self was “a space-bound ghost” in need of drastic jolts. Ordinary life, going frictionlessly along — that was the intolerable thing. A fender-bender, a tornado, a sudden water shortage: salvation for the metaphysically marooned. The leak in Weston three Saturdays ago, and the subsequent more than 48 hours during which we were warned not to drink from the city’s pipes, were not of course the end of the world. But who could miss the apocalyptic thrill behind the words of Frederick A. Laskey, executive director of the Massachusetts Water Resources Authority? “This is everyone’s worst nightmare in the water industry.” The absolute worst!

It’s perfectly normal to delight in disruption. As much as it was a drag not to be able to drink from the tap (in a confused way, I regard drinking from the tap as a civic duty), I was consoled by the thought of all that leaked water thundering into the Charles: 8 million gallons an hour! The number was awesome, Biblical.

Mind you, if a breakdown is to maintain its charm, it has to be quick and zesty. By Monday afternoon, for example, with the temperature climbing and the mandated boiling of drinking water no longer a novelty, the city had begun to take on a rather seedy, tropical feel; we seemed to have entered some bleak comedy of diminishing returns, as if we had fallen out of the Percy-sphere and into a novel by Graham Greene. Brevity is the key here: a lightning rearrangement of priorities. No one wants a long-term breakdown.

When the top floor of my neighbor’s house caught fire, we were naturally concerned. But as it became clear that no one had been injured, and that the fire department had the situation in hand, a festive atmosphere prevailed. How nice it was to be out in the street at 3 in the morning, wearing our jimmy-jams, with the emergency service disco-lights flashing! We returned cheerfully to our beds, and slept well. One morning in the summer of 1994 my wife and I were served breakfast at a Brookline diner by a young man who, the previous evening, had attended a Green Day concert at the Hatch Shell. Large-scale disorder had occurred, cop cars overturned, a completely pointless riot, and our waiter was still buzzing with the excitement of it. He was tired, but vivid and passionate in his speech: He seemed to have derived some deep spiritual benefit, like a person coming back from a shrine.

At such moments I know that Walker Percy was right. The floating self rejoices in disaster. A slight impingement of the catastrophic restores the human animal. The pope, if he doesn’t get arrested first or lost in a cloud of volcanic ash, intends to beatify Cardinal John Henry Newman, the 19th-century British cardinal, on his visit to England this year. Personally I regard Percy, like Newman a Catholic convert, as a far stronger candidate for canonization: St. Walker of Covington, patron of the breakdown. His little miracle happens every day.

James Parker writes regularly for Ideas and is a contributing editor at The Atlantic. 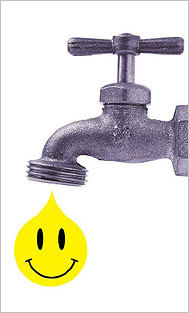 (istock photo/Globe Staff illustration)
Your comment is subject to the rules of our Posting Policy
This comment may appear on your public profile. Public Profile FAQ