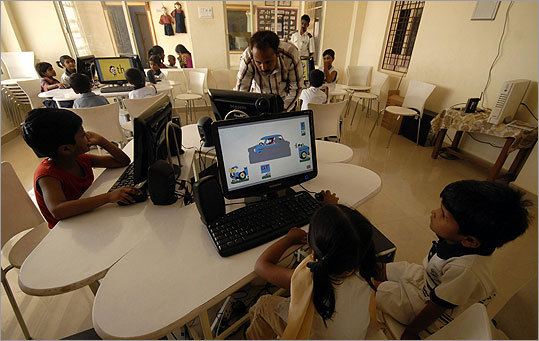 (Krishnendu Halder) The computer lab at New Little Scholars school in the outskirts of Hyderabad.
By Riddhi Shah May 9, 2010

HYDERABAD, India--The end-of-day bell has just gone off at MA Ideal High School, and a Grade 4 classroom on the first floor explodes into a rush of activity. Pig-tailed girls and boys in indigo shorts jump out of their benches and jam through the doorway. But in a corner toward the back of the room, 10-year-old Sanaa Sultana ignores the shrill ringing. She continues reading aloud quietly from her English textbook. Next to her, 11-year-old Mohammed Majid--a hulking, towering contrast to Sultana’s tiny frame--follows her in his own book, repeating after her, sentence for sentence. Sanaa is Mohammed’s partner in the school’s peer-to-peer learning program. When he joined MA Ideal a year ago, Mohammed didn’t know more than a few rudimentary words of English. Now, after a year of sitting with Sanaa, one of the class’s brightest students, Mohammed almost effortlessly makes his way through an entire sentence.

One floor above them, young teachers in salwar kameezes--long, loose tunics paired with drawstring tapered pants--assemble in neat rows in a classroom, waiting a monthly training session to begin. Today they will learn how to encourage class participation. On the ground floor, Mohammed Anwar, the school’s proprietor, is talking to a group of parents. He’s telling them about his plans to introduce Genki, a phonics-based teaching method that will help first-generation English learners speak the language more fluently. The burqa-clad mothers are unconvinced, preferring instead the more conventional method of teaching by textbook, but Anwar, with his energy and zeal, manages to be persuasive.

MA Ideal also offers its students free karate lessons, computer classes, soccer training, and health camps. But the school--a private, small-scale venture--is not situated in a plush upper-middle-class neighborhood. Instead, it is tucked away in Kishanbagh, a sprawling slum of low-slung concrete huts, tin-roofed shanties, and bare-bellied children who gambol with skinny, underfed dogs. And the average fee at MA Ideal High School? About $3 per month--one-20th the cost of a typical private school in India.

MA Ideal is part of a grass-roots private school movement that has spread through India in the last two decades. Kishanbagh, a 5-square-kilometer patch of land, has 28 low-cost private schools, while India itself has some 300,000, each a buzzing hive of teaching, learning, and extracurricular activity. These schools offer poor residents across the country an alternative to the inefficient public school system. In Kishanbagh, for example, the local public school is a cavernous building where teachers rarely show up, toilets regularly overflow, and classes are almost never held. In the western world, private schools are associated with high fees and plentiful resources, but Hyderabad’s schools succeed by focusing on efficiency and accountability.

Principals like Mohammed Saleem of the nearby Adams High School say that fierce competition between schools forces institutes to strive toward providing the best education they can. ’’We have to listen to parents because otherwise they will admit their children to a different school. I have to constantly find new ways to keep parents interested in my school,” says Saleem.

The last two decades have witnessed the rising popularity of low-cost private schools across the developing world. Researchers estimate that there are now 1 million budget schools in countries like Ghana, Kenya, Nigeria, China, Pakistan, the Philippines, and Uganda. Started by local entrepreneurs, these schools are most often located in urban slums, operate out of a few rooms, and are run by teachers who are paid less than half the salary of a government teacher. Few receive state support or external funding.

And yet, low-cost private schools are far more effective than their government counterparts. In India, for example, the country’s largest educational NGO, Pratham, has estimated that 68 percent of the students enrolled in low-cost private schools can read fluently as opposed to just 53 percent in government schools. In Ghana, James Tooley, a University of Newcastle professor who has been studying low-cost schools, found that in English, private school students on average scored 72 points out of 100 on a test designed by Tooley, while government school students scored 58 points.

The results have been so impressive that some researchers are now suggesting that low-cost private schools might be the answer to educating the world’s poor. Advocates like Tooley are asking for government deregulation, private investment, and international support to help the sector expand and bring in children who for too long have had to deal with crippled state schools. ”International and governmental support will lead to increased competition; more schools will want to enter the market, giving rise to better schools,” says Tooley.

Education has long been directly related to a country’s rise out of poverty. Literate citizens tend to have smaller families, better health and sanitation, lower mortality rates, lower infant mortality, and ultimately, higher incomes. Educated societies are also more gender-equal, less corrupt, and better governed. According to the World Bank, every year of schooling increases wages by a worldwide average of about 10 percent. The completion of primary school reduces a child’s chances of contracting HIV/AIDS by half.

However, in large swaths of the developing world, public education has failed. In India, despite an education budget of $10 billion, 33 percent of the country’s population continues to be illiterate. In Nigeria, teacher absenteeism is astonishingly high and teacher-pupil ratios are as low as 1:90. In Uganda and China, public schools exist only in urban or semi-urban areas, while in Kenya, public schools are over-enrolled and teachers frequently go on strike. The common problem is a lack of accountability: Public school principals are often answerable only to bureaucrats sitting in distant offices who rarely visit the schools. Parents have little or no control over the education of their children.

It was this disillusionment with the public sector that inspired Hyderabad’s first few entrepreneurs--often parents whose children had been forced to attend government schools--to start private schools in the 1980s. By the time Tooley arrived in Hyderabad in 2000 on an assignment from the International Finance Corporation, a member of the World Bank group that promotes private investment in developing countries, the number of low-cost schools in the city had ballooned. ”I was supposed to be studying private schools for the rich,” he says. ”But instead I discovered this flourishing movement that empowered the poor.”

After a year of investigating the phenomenon in India, Tooley traveled across continents in search of other low-cost private schools. What he saw shocked him: Small, private educational enterprises were almost ubiquitous in developing countries. He even found schools in rural China where officials insisted there were none. Soon other academics began studying the steadily expanding movement.

One of the reasons that educators began championing low-cost private schools was their economic efficiency. In India, the government spends an average of $125 per child per year. The annual cost of a low-cost private school is rarely more than $80 per child. It was clear that the private sector--unorganized and scattered as it was--was providing a better education, at a lower cost than the government.

For the international development community, the crisis surrounding education is growing. Despite sustained campaigns and considerable developmental aid, universal primary education remains elusive and illiteracy rampant. As of January 2010, 72 million school-age children were still out of school. And according to current projections by the UN, 58 of the 86 countries that are not yet fully literate will not be able to get there by 2015.

As a result, some organizations are beginning to alter their tactics. The World Bank, for instance, has supported two pilot projects for low-cost schools in India and Pakistan and also funded subsidies for school voucher projects in Colombia and the Philippines. ”There is a growing sense that this is a sector worth looking at. It’s time to be bold and try new things,” says Harry Patrinos, lead education economist for the World Bank.

Proponents are hoping that the World Bank’s enthusiasm will encourage other organizations to push governments to support low-cost schools. One suggestion is to allow companies to invest and offer loans to schools. Currently, a few countries like Ghana and the Dominican Republic allow private companies in education, but others, like India, don’t. Several organizations have already begun to invest in low-cost education: Opportunity International, for instance, offers loans to hundreds of budget schools in Africa, Asia, and Latin America. In India, on the other hand, entrepreneurs like K Suryakala Reddy, founder of New Little Scholars School in Hyderabad, are forced to file false applications for home loans to finance schools.

For critics, though, the popularity of low-cost schools is a dangerous trend, one that will ultimately marginalize the very poor. Society’s poorest, says Dina Craissati, UNICEF’s senior education adviser, often cannot pay even the very meager fees of budget schools. Worse, low-cost schools are ultimately unsustainable because ”in times of economic crisis, the poor will sacrifice nonessentials like schools fees first.” And finally, public schools are the only way to hold governments accountable for providing their citizens with education--a right that many countries have enshrined in their constitutions.

But proponents of budget schools insist that there is a way around these objections: Governments can fund vouchers for extremely poor students. Many low-cost schools already offer scholarships based on need, but state intervention will help standardize the practice and solve the problem of limited access. However, says Tooley, there is a caveat: Making the vouchers too freely available may topple the careful balance of competition, parental choice, and accountability that makes these schools work.

Other critics say that an increasing dependence on private schools will create a more unequal society. Rich students will opt for better schools, with the poor having to make do with underfunded, badly staffed schools. ”Low-cost private schools are a response to a very bad situation. Instead of encouraging them, we need to make the public system more effective,” says Henry Levin, professor of economics and education at Columbia University.

But back in the dusty, baking heat of Hyderabad, 37-year-old Hazrat Sultana is too battle-worn to believe that more money will improve the local public school. Sultana, a stay-at-home mother whose husband owns a footwear stall in the slum, recently pulled her daughters out of the government school.

They now attend Golden Jubilee school, a three-story bare block where the windows don’t have panes and flower-patterned curtains substitute for doors. The public school was bigger, she admits. But just one year in Golden Jubilee has taught her daughter Anjum Nazia more about fractions and world capitals than she learned in seven years at the government school. Anjum Nazia now wants to become an engineer some day.

Riddhi Shah is completing her master’s degree in cultural reporting and criticism at New York University’s Arthur Carter Journalism Institute. She has worked for the BBC, India Today, and the Hindustan Times in India and has written for Saveur magazine and the Brooklyn Rail in New York.