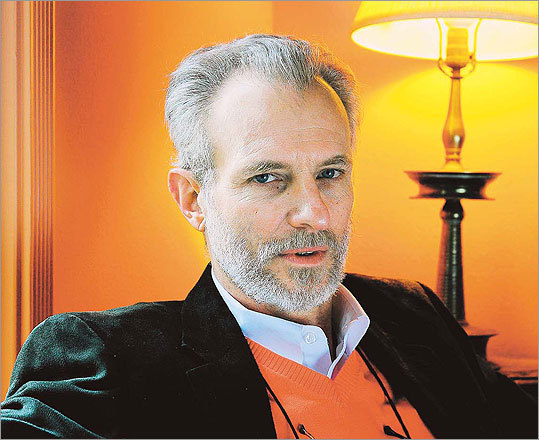 (Jan Sturmann for The Boston Globe)
By Thanassis Cambanis May 2, 2010

The first followers of Christ didn’t consider themselves ’’Christians’’; they were Jews who believed that a fellow Jew named Jesus Christ was the long-awaited messiah. It took centuries for Christianity to evolve and solidify as a distinct faith with its own doctrine and institutions.

In ’’Muhammad and the Believers: At the Origins of Islam,’’ University of Chicago historian Fred M. Donner wants to provide a similar back story for Islam — a religion which, in the popular imagination, sprang wholly formed from the seventh-century sands of Arabia. Mohammed preached at the juncture of the Roman and Sassanian empires, winning support from Christians, Jews, Zoroastrians, and various deist polytheists. According to Donner, Mohammed built a movement of devout spiritualists from many faiths who shared a few core beliefs: God was one, the end of the world was near, and the truly religious had to live exemplary lives rather than merely pay lip service to God’s laws. It was only a century after Mohammed founded his ’’community of believers” and launched the great Islamic conquest that his followers started to define their beliefs as a distinct religious faith.

Devout Muslims — who model their lives directly on the mores of the Prophet and his companions — will be surprised to read that Mohammed welcomed Christians and Jews into his monotheistic movement. In fact, Donner suggests, the entire narrative of Islamic conquest misinterprets the ecumenical nature of the early believers. Mohammed, it appears, didn’t require his followers to renounce their religion; early Islam, in this read, was more a revival of existing faiths than a conversion.

Donner spent decades studying Arabian nomads and the early Islamic texts before tackling Islam’s early intellectual history. Among his many innovations are to connect Mohammed’s movement to Christian, Jewish, and nomadic ideas, and to explain why such an enormous swath of the known world fell so quickly under the sway of Mohammed’s successors — because, Donner argues, they didn’t have to convert to a new religion, only to affirm the piety demanded by an inclusive if zealous community of believers. He portrays Mohammed’s early believers as evangelical activists, swimming against a tide of casual religious practice. Donner intends his portrayal to conclusively counter a popular argument among some Western scholars who describe early Islam as a primarily economic and political movement that deployed the new religion as a banner of convenience.

An even-keeled academic, Donner wants to stay as far away as possible from anything that smacks of a political crusade. But his critical historical assessment of the life of the Prophet Mohammed makes bold arguments that are sure to anger some Muslims, while also denying comfort to those anti-Muslim pamphleteers whose tracts suggest that Islam isn’t a real religion. Ideas spoke with Donner by phone.

IDEAS: How did you get interested in this subject?

DONNER: It was an accident. I started off in college doing sciences. I thought, after college I want to travel and I want to learn languages. If I do Mesopotamian archaeology, I’ll get to travel and use languages. That drew me into the Near Eastern studies realm.

I gravitated toward early Islam because I got interested in a question of social history. The expansion of early Islam and the Islamic conquests were one of the few episodes in modern times in which pastoral nomads played a role and about which we have documentary evidence.

IDEAS: What did you focus on initially?

DONNER: The early Islamic conquests. I was interested in the relationship between pastoral groups and the expansion movement. It was a state expansion, in my view, and not just a spilling out of people. The nomads were tightly controlled by the elite, the settled people, who used them for the purpose of expanding the state. The pastoralists became the cannon fodder that allowed the state to expand. That got me into early Islam.

Once I got into early Islam I had to confront the question of the sources. I spent 25 years studying the sources. I went into this whole question of source criticism. I also got into a broader question of intellectual history, of what was this movement was when it started, really a history of religious ideas. I bumbled from one interesting topic to another all in the same historical context.

DONNER: There may be a lot of Muslims willing to entertain these ideas in private, but they don’t want to go on record in public. There are plenty of examples, like the Egyptian who wrote the book about the style of the Koran and was hounded out of the country as an apostate. There are other intellectuals who feel they may espouse ideas that are not in accord with traditional dogmas and are aware that they might better keep those ideas to themselves.

IDEAS: Are your ideas particularly threatening to literalists because you question the Islamic narrative without attacking the faith?

DONNER: It stays within the framework of the Prophet’s narrative. What I really suggest has to be revisited is the notion that at the very beginning this community was hard and fast set as a religious community. It could include Jews and Christians. They were monotheists who saw themselves as people trying to live in accordance with God’s rules and law. In that sense they were all believers, and they could make common cause with them. Only 75 or 100 years later did they shake out as a separate religion.

IDEAS: When did Muslims start distinguishing themselves from other people of the book, Jews and Christians?

DONNER: Where the divorce takes place — that’s an interesting question, because we have always viewed the Muslims as separate people. My sense is that this is beginning 60 to 75 years after the death of the Prophet, in the seventh century. You might have quite a lag between official change and popular change. We don’t really understand this change or transformation.

IDEAS: How important were apocalyptic beliefs for the early believers?

DONNER: It plays a recurrent role in all faiths that have an apocalyptic component, as does Christianity in the United States, where you see people carrying around signs. You see periodic upwellings of this sentiment. The component that is problematic is whether Mohammed was preaching a kind of end time coming soon. My sense is that he did think the end was coming soon. Later Muslims have some problems with this, so there’s a tendency of early believers to paper this over. Christianity went through the same problem.

IDEAS: Will your book be translated into Arabic?

DONNER: One can hope, but I have no idea. In Beirut, you can get almost anything published.

Thanassis Cambanis’s book, ”A Privilege to Die: Inside Hezbollah’s Legions and Their Endless War With Israel,” will be published by Free Press in September. He is a New Ideas Fund fellow, teaches at Columbia University, and has written about the Middle East since 2003.