Journalists are used to hearing 'no'

RANDY MICHAELS, CEO of the huge and troubled Tribune Co., took a few minutes earlier this month to enact a local language edict: He issued a list of 119 words, phrases, and pronunciations not to be aired by the company’s Chicago radio station, WGN-AM. No more aftermath, allegations, or area residents, said the memo distributed by news director Charlie Meyerson; fie on famed, no to near miss, and a swift kick for speaking out.

“You’d think the chief executive officer of a company struggling to emerge from bankruptcy...would have better things to do,” snarked Chicago blogger Robert Feder. And Meyerson’s addendum, ordering employees to note verbal violations on custom-printed “bingo cards,” caused consternation in the journosphere.

But the list itself attracted little criticism; journalists are used to this sort of thing. Usage writers, after all, have been ill-wishing certain words for centuries, and newsrooms — where editors enforce “house style” — are the natural bailiwick of the vocabulary police. One of Michaels’s early models is William Cullen Bryant, who in 1870 or so put out a list of words not allowed in the New York Evening Post, the paper he edited for half a century. Bryant’s “Index Expurgatorius” didn’t address the use of “white stuff” for snow, but he told reporters not to call fire “the devouring element.” He objected to “juvenile (for ‘boy’),” just as Michaels condemns “youth meaning ‘child.’ ” Bogus was banned by Bryant; guys is taboo for Michaels.

In Chicago journalism, the banned-words tradition is at least a century old; Robert W. Ransom, an editor at the Record-Herald, published “Hints & ‘Don’ts’ for Writers and Copyreaders” in 1911. Ransom sounds almost contemporary as he denounces the journalese of his (and sometimes our) day: hyperactive verbs like flay, grill, hit, roast, rap, probe; elegantisms like solon and city father; hero, the icon of the time; and the redundancy Michaels is still condemning, completely destroyed.

For today’s taboos, journalists can consult the AP or New York Times stylebook, or even the BBC’s guide, available online, which casts a cold eye on axe, quiz, and pledge (as verbs), clash, bid, aim, oust, and garner (“only ever used by hacks”). And most copy desks compile their own local ordinances, attempts to limit the repetition of especially well-worn puns and clichés.

But many of these guides, written as quick references for editors, are terse to the point of mystification. Is “untimely death” banned because it implies regret (which might not be warranted) or because the editor thinks no death is “timely”? Is perished forbidden because we’re supposed to use died, or is passed away OK? And how are Michaels’s announcers, forbidden to say “stay tuned” or “we’ll be back,” supposed to segue to commercials? We really do need some ritual phrases to get us through the day; this seems like trying to ban “hello” and “goodbye.”

And, of course, all banned-words lists embody the authors’ prejudices, which not all readers and listeners will share. Editors hate “fled on foot” (journalese!), but to me, “ran away” sounds like what Huck Finn (or Frances the badger) did, not like the act of an escaping suspect. John McIntyre, a former copy desk czar who blogs at You Don’t Say, grumps hilariously about the seasonal horrors — “white stuff,” Grinchy crimes, and especially “ ‘tis the season.” As a former editor myself, I know what he’s talking about. But as long as I never have to write another holiday headline, I’ll gratefully accept any cliché the suffering editor serves up.

Such “don’t” lists, you might say, are themselves a cliché— a standard defense against the ever-present threat of journalistic slackerdom. But lists of taboos leave the underlying questions unasked: When does convenient shorthand become a cliché? (Opinions differ, and there’s competitive pressure; some usage watchers seem eager to be ahead of the pack in declaring a catchphrase or slang word dated.)

The Chicago memo recommends using conversational English, but whose conversation are we talking about? We all know thousands of words we rarely or never use in conversation; surely we don’t think they should all be banned from the media. But if aftermath and perish are off limits at WGN, why would intercede and jubilant be spared? (In fact, jubilant was on Bryant’s banned list, along with reliable, talented, ovation, and jeopardize.)

The call for “fresh language” is another cliché that demands a closer look. Sometimes repetition and formulaic language serve a speaker’s purpose better than novelty; sometimes the story really is the same — only the names have changed — and too much striving for originality may annoy and distract. It’s not so easy to say when a familiar turn of phrase crosses the line from “efficient” to “clichéd,” when a narrative technique is no longer streamlined but merely lazy. Writing and editing are hard, sweaty work; sweeping the “bad” words off the table may look like a bold stroke, but if the past is any guide, it’s not the way to get the job done. 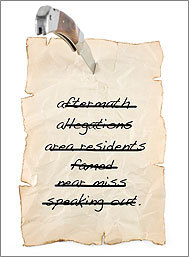