The dark forest of childhood 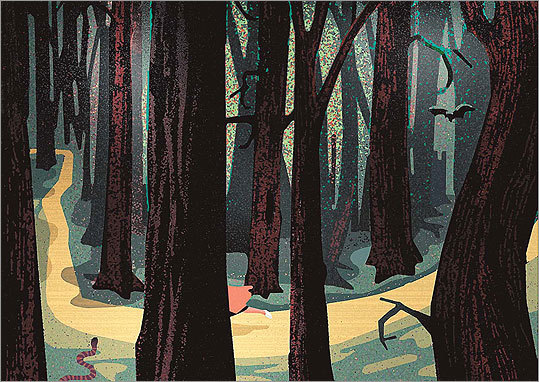 (Mick Wiggins for The Boston Globe)
By Laurel Snyder March 21, 2010

Recently, on a visit home, I was rifling through a box of old books in my mother’s dank basement when I came across a childhood edition of Hans Christian Andersen’s fairy tales. I hadn’t thought about the book in years, but sitting cross-legged on the floor, looking at the wonderfully rich illustrations by Michael Hague, I found myself transported back to my childhood. Slowly I turned the big glossy pages and peered down at vivid portraits of fiery devils, haughty queens, and goblins painted in jewel tones. I spent several hours flying with the Wild Swans, swimming beside the Little Mermaid.

When I was done I sat there in the basement for a bit, and thought about the strange journey fairy tales have taken, from the book I held in my hands to recent novelizations of fairy tales for increasingly sophisticated “young adult” readers. These new books are rooted in old stories and fables, but written for today’s teens. They’re not so much retellings as spinoffs. Often they’re dark hybrids that blend a well-known fairy tale into a hot trend, as in the case of Jackson Pearce’s “Sisters Red,” which retells “Little Red Riding Hood” with a werewolf twist. Or Malinda Lo’s “Ash,” which folds a world of dark fairies into “Cinderella.” Sometimes these books contemporize a fairy tale, like Sarah Beth Durst’s “Ice,” which sets “East of the Sun and West of the Moon” at an Arctic research station. They sell well.

But thinking about these books agitated me. Fairy tales had mattered a lot to me as a kid. I’d wept and sighed for my mermaids and princesses just fine without teen angst and ominous paranormal boyfriends. I had believed in those stories. Been kept awake at night by thoughts of cruel stepmothers and handsome princes.

These new books were perverting a fine old tradition. Turning something timeless into something timely. These books were a fad, and I couldn’t help thinking that the popularity of such titles might indicate something more ominous, a sea change. I wanted to call this shift “the shrinking childhood” or “the disappearance of the middle grade.” This idea was upsetting to me not just as a mother, but as an author, too, because I write fiction for exactly this age group — girls too old for picture books but not yet ready for lusty teen vampires. I’d hate to think of their innocence and their energy being crowded out.

Despite today’s exceedingly careful parenting of our toddlers — complete with supervised play dates, educational programming, and organic snacks — we live in a world where 11-year-olds read “Gossip Girl” and sext one another. And although of course your daughter isn’t doing such things, her friends are, so she’s aware of them at an increasingly young age. With nannies at one end and boyfriends at the other, the years when “a kid can be a kid” are disappearing. Inundated on all sides by adult media, tweens are replacing kids. If this trend continues, what will happen to the role models I remember best? The princesses, sure, but also the Ramonas and the Pippis?

There was nothing much I could do about it, but it was clear to me that the long, fine tradition of the carefree child was ending. Until a few days later, I reached for the Andersen/Hague book again.

This time (perhaps because I was no longer sitting in the dim nostalgia of my mother’s basement) I read the stories differently. I realized that the book depicted a world that far predated my own happy childhood memories. A world that was anything but benign tree-climbing and nose-picking. I saw that those pages were riddled with fear and angst and love and desire. They were mature, full of death and captivity, hardship and poverty. They did bridge the gap between childhood fantasy and adult decision-making. In them, children had to be sly, vigilant, watchful. Maybe the stories didn’t read like Buffy-style teen sagas, but they were mature.

Thinking about all of this jarred a memory for me of an old poem I’d loved as a kid, about a little girl stolen by the fairies. “They stole little Bridget/ For seven years long;/ When she came down again/ Her friends were all gone./ They took her lightly back,/ Between the night and morrow,/ They thought that she was fast asleep,/ But she was dead with sorrow.” These lines sprang into my head, and I couldn’t ignore that fairies in their original time were deceitful and frightening. Of course they were! The world that conjured them into being was a scary place, full of disease, abuse, and hunger. Never mind fairies — kids in that world had grappled with big issues. So maybe mature fairy stories weren’t new at all. Maybe the shift we’ve seen is only a shift back.

My own sense of what a fairy tale is is linked to my own sense of what a child is, and that has been part of an experiment we call the 20th-century middle-class democracy. The golden age that followed the advent of child labor laws and the creation of mass public education. The post-war years of financial growth and the miracle of penicillin. The mythological years of prosperity and an inevitable cure for every ailment. Years full of happy fairies, bright colors, princesses of a merry sort. The decades of .

Maybe, I thought, I’m the one whose childhood was defined by a fad, a trend — the trend of the midcentury American fairy tale. Maybe mature fairy tales are the norm, and these new books, with their retold teen mermaids and Goose Girls, are closer to the intent of our original fairy tellers. Different in style, but not in substance. Just as little girls today are pushed into womanhood by shameless advertising, skimpy clothes, unemployed parents, and a rising tide of homelessness, so were our great-great-grandmothers pushed into their womanhoods at a tender age.

I felt sad, sitting there and thinking that maybe the fairy tale was actually our American 20th century. Thinking that this new hoard of dark fairies might only symbolize the end of a moment, a brief golden age. Thinking that this generation of readers might be a bellwether, a book club that fits its encroaching dark forest, full of wraiths and spells and teen lust, just as the dark forest fits our daughters, and prepares them for whatever comes next.

Laurel Snyder is the author of five books for children, most recently “Any Which Wall.’’