Tale of the tape

Duck or duct? A sticky question.

The sticky stuff you use to remove warts, make wallets, and occasionally seal a leaky seam: Is it “duct tape” or “duck tape”? Reader Mike Webster wrote recently to revive the question, which still vexes word sleuths despite years of searching.

You may think the matter is settled, and that’s understandable: In the past few years, the “duck tape” adherents have been on the march, and the story they promote has considerable appeal. In the 1940s, the tale goes, the US military asked Johnson & Johnson to come up with “a waterproof, strong cloth based tape that could keep moisture out of ammunition cases.” The tape J&J produced was (allegedly) called “duck tape,” either because its cloth base was cotton duck (a plain-weave fabric, lighter than canvas) or because it repelled water (as in “off a duck’s back”). “Duck tape,” by this account, became “duct tape” only during the postwar building boom, when its chief use became taping heating ducts.

Not only is this a good story, it’s the “official” version, taken from Johnson & Johnson’s company history (viewable at the blog Kilmer House). And even the Oxford English Dictionary says that “duct tape” may “perhaps” be an alteration of “duck tape.” But is there any evidence that “duck tape” was the earlier name of “duct tape”?

Something known as “duck tape” does indeed predate “duct tape,” but this tape has no adhesive properties. “Tape” means simply a narrow strip of fabric, and “duck” is linen or cotton cloth. The Oxford English Dictionary’s earliest mention of “duck tape,” dated 1899, refers to a decorative trim on a garment.

The dictionary’s 1902 “duck tape,” from a Brooklyn Daily Eagle story about the Williamsburg Bridge, sounds more promising: “100,000 yards of cotton duck tape must be wrapped around the cable with neatness and exactitude.” This “duck tape,” however, doesn’t start out sticky. Workers make the “tape,” the article explains, by cutting cloth into strips, which are then coated with waterproofing, wrapped around the cables, heat-sealed, and coated again. Only once, in fact, is the covering called “duck tape”; the bridge engineer calls it “cotton duck wrapping.”

Other early mentions of fabric tape or duck tape also refer to the cloth layer of a product, not to an adhesive tape. “Rubber belts are made by cementing together plies of cotton duck with india rubber” (1899). “A strip of cotton duck...was immersed in the bitumen...after an immersion of about 1 hour, the treated duck strip was peeled off” (1915). “Adhesive tape can be made by coating a strip of cotton tape with the compound [of melted rubber and rosin]” (Popular Mechanics, 1930).

From the ’40s into the ’60s, the popularity of Venetian blinds — with their vertical “ladder tapes” made of cotton duck — brings “duck tape” into print more often. But if servicemen really transferred the name to the new wartime adhesive tape, they’ve left no trace: “Duck tape” in that sense isn’t recorded till the 1970s, when “duct tape” is already current. And the duck version doesn’t take off till the ’80s, when Manco trademarks its “Duck Tape” brand.

The official story has some holes on the “duct tape” side as well. Martin H. Gerstel, product manager for J&J’s Permacel company, outlined the latest developments in adhesive tapes in a 1958 article that offered photos of workers taping heating and air ducts, “typical applications” of the product. “A special silver colored tape is available for this use,” Gerstel noted.

He didn’t call it “duct tape,” however, and apparently neither did anyone else, even in the immediate postwar era when the product was so popular. The earliest citation I’ve found comes from a Montana newspaper ad, dated December 1960, advertising duct tape at $5.98 a roll. The New York Times doesn’t mention the tape till 1973, and it thinks readers may need a definition: “duct tape — a fiber tape used to seal the joints in heating ducts.”

So what happened in those crucial decades, the ’40s and ’50s? Did people start referring to the new cloth adhesives as “duck tape” at some point? Did the silver tape Gerstel mentioned become “duct tape” during the postwar building boom? We simply don’t know.

I’ve appealed to the J&J historian for evidence. (I’m especially dubious about the “duck’s back” etymology, since waterproof electrical tapes had been around for decades; why weren’t they called “duck tape”?) But Michael Quinion questioned the official story five years ago, in a report at World Wide Words, and got no response, so I’m guessing no proof is forthcoming.

Meanwhile, you’re free to use either variation, though “duct tape” is unquestionably the style in most publications. But “duck tape was the original name”? That remains a statement of faith, not fact.

Correction: Due to a reporting error, the Word column about duct tape gave an incorrect date for an article about an early silver tape made by Johnson & Johnson. The article was published in 1958, and thus does not contradict the company's story that the tape was invented in response to a request from the military. 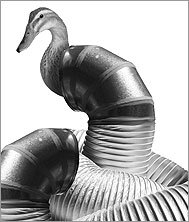 (istockphoto; Globe Staff illustration )
Your comment is subject to the rules of our Posting Policy
This comment may appear on your public profile. Public Profile FAQ