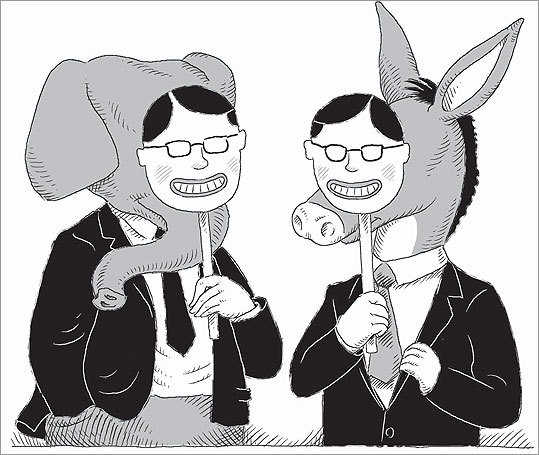 (Wesley Bedrosian for The Boston Globe)
By Kevin Lewis February 14, 2010

You shouldn’t judge a book by its cover, but you can probably judge political partisans by theirs. Psychologists at Tufts University showed people photos of white Democratic and Republican politicians and college students. People were able to guess the political affiliation of the person in the photo at a rate significantly better than chance. There was no significant difference in how accurately people perceived the political affiliation of men vs. women. When asked to assess the traits of people in the photos, people perceived powerful-looking individuals to be Republicans and warm-looking individuals to be Democrats, though only perceptions of having a powerful appearance actually correlated with political affiliation.

Rule, N. & Ambady, N., “Democrats and Republicans Can Be Differentiated from Their Faces,” PLoS ONE (January 2010).

In prices, precise is nice
Note to real estate agents: You’re leaving money on the table! Researchers at Cornell University conducted multiple experiments and analyses to demonstrate what they call the “price precision effect.” When people are presented with comparable prices, the one that is rounded (i.e., has more zeros) is perceived to be bigger, even if it’s slightly smaller. People seem to be thrown for a loop by a large, yet precise, number, causing them to misinterpret it as a smaller number and, thus, be willing to pay more. The same pattern was found in a survey of prospective home buyers and in transaction data from the Multiple Listing Service. According to the authors, if there are two comparable homes listed for $485,000 and $484,880, the latter can be expected to sell for about $1,200-$1,450 more.

Power corrupts, starting with you
Hardly a day goes by without us hearing about the hypocrisy of some powerful person. But are these just a few bad apples? To find out, researchers primed people to think about power and then asked them to report how acceptable it would be for others or themselves to entertain unethical behavior, such as over-reporting travel expenses, breaking traffic laws, under-reporting income, or stealing a bike. Those who were put in a powerful frame of mind were significantly more hypocritical - in other words, they demanded better behavior from others than from themselves. In contrast, those who were put in a low-power or illegitimate-power frame of mind exhibited what the authors call “hypercrisy” - demanding more from themselves than from others.

Botox numbs the sadness muscle
Because emotions are often revealed in subtle facial expressions, reading faces (or “tells”) is important in domains like poker and law enforcement. Conversely, a team of researchers has found that disabling these expressions may disable the emotions, too. Patients who were about to receive Botox injections in their frown muscle were asked to read sentences describing angry, happy, or sad situations and then press a button to indicate understanding. When the same patients were tested two weeks after treatment, they took significantly longer to indicate their understanding of angry and sad, but not happy, sentences. This result suggests that the brain doesn’t just send signals to the body but also relies on subtle signals from the body to inform higher-level thinking.

Math anxiety starts with the teacher
As if teachers didn’t have enough to worry about, new research suggests that they should to be mindful of their own anxieties. According to psychologists at the University of Chicago, the level of math anxiety reported by first- and second-grade teachers - who are nearly all women - reduced the math achievement of girls, but not boys, over the course of the school year. Girls seem to be picking up on the stereotype that girls are not as good at math as boys. Indeed, girls whose math achievement suffered the most were also the ones who most endorsed the stereotype, as measured by whether they drew a boy or girl in response to a story about a student who was good at math. The effect did not appear to be due to math-anxious teachers being worse math teachers, since the boys were not affected.