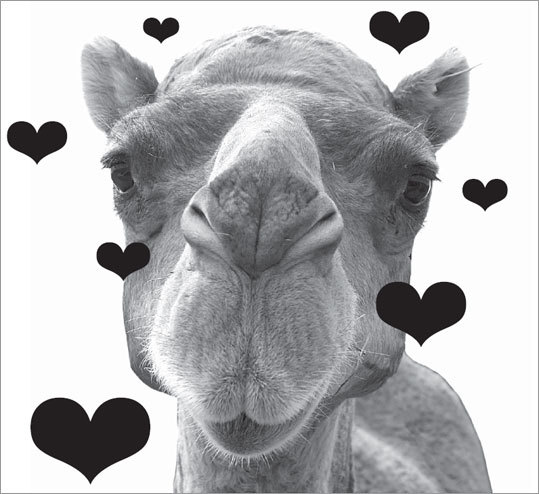 She is the dream that scatters with the sun, Absorbed into flame and flame absorbing, Eternal motion one with endless peace, The camel has no was or will be, only being.

The above lines are the final stanza of a poem I recently completed, a rousing work titled “Spirit of the Sand.” The poem contains 24 lines in all, each expressing a mystical appreciation for the Arabian camel. To be honest, I’m not sure I really believe that the dromedary’s heart beats in every chest, nor that it carries on its back the thirst of generations. In fact, I don’t really like the animal that much. I do, however, like the idea of winning a brand new Range Rover.

As I write this, there’s a festival underway in a remote corner of the United Arab Emirates, where I live, to celebrate traditional local culture. The centerpiece of the event - along with (no kidding) a camel beauty contest - is a camel-themed poetry competition, the winner of which will drive away in a luxury SUV. “Hey, you write poetry,” said my wife when she saw the announcement for the competition. “Write one.” For the past few months, we’ve been driving around in a Yaris. I started writing.

The winners of the competition are due to be announced the first week of February, but I don’t hold out much hope. The problem isn’t so much that I’m not a camel person - I can wing that - but that you are required to write your poem in the Nabati style. Nabati is an ancient form of Arabic folk poetry passed down through generations of Bedouin tribesmen. In order to write a Nabati camel poem properly, you need to have not only seen one of the animals, but to have milked one, scrubbed one, maybe had one spit in your face. This dusty traditionalism is the whole point of the contest.

It’s an odd thing, but you could say that camel spit has been making a comeback in the United Arab Emirates recently. The proud home of the world’s tallest building, the world’s largest man-made island, and the world’s highest Swarovski-crystal-per-capita ratio is currently in the throes of a full-fledged Nabati craze. People in the cities of Dubai and Abu Dhabi zoom home in their BMWs to watch “Million’s Poet,” a televised Nabati talent show whose ultimate winner gets a $1,362,000 cash prize, along with the kind of rock-star celebrity that poets elsewhere in the world can only dream about. Since it launched a few years back, “Million’s Poet” has become the Arab world’s answer to “American Idol.” Across the region, tens of millions of people tune in each week to vote for their favorite versifier via text message. Even the kids are hooked: Internet message boards ring with heated debate over who’s the best (or cutest) poet in the land. Nabati action figures cannot be far behind.

“Millions Poet,” as frivolous as it may seem, is taken very seriously by the United Arab Emirates’ rulers. The government funds and promotes the show as part of a broader effort to reestablish Nabati as the cultural cornerstone of the country. This effort, in turn, is born of a much larger concern. As satellite dishes and skyscrapers proliferate, there is a growing sense here that local traditions are being swept away. In some Arabic nations - the ones you tend to read about in the papers - this concern has led to a pervasive and restrictive form of Islam: The rise of ultra-conservative Wahhabism in Saudi Arabia represents an emphatic example. The United Arab Emirates, characteristically, has opted for a more moderate approach. Putting Nabati poetry under lights is seen here as a perfect way to stave off a collective identity crisis, to remind nationals who they are - or at least who they once were.

Nabati poetry is so old, nobody really knows how old it is. We do know that the form dates back at least 1,000 years, and was first practiced by the Bedouins who roamed the deserts of the Arabian peninsula. For centuries, it was the only way for these people to record their victories in battle, their humiliations in love, the weaseliness of their enemies, and the munificence of their leaders. It’s a form of social history for people who didn’t have pens, but who loved a singsong around the campfire.

The Arab world has a classical, bookish poetry tradition that is renowned for its litany of migraine-inducing formalities. Nabati is to this tradition what break dancing is to the minuet. It’s meant to be loose-limbed and spontaneous, recited in everyday language, expressing common concerns. Its rules are negotiable; if it sounds good over a plate of al harees, you’re in. And while Nabati themes do occasionally tend toward the lyrical - “My Heart Is Set Ablaze By Anxieties” by Si’dun Al Waji comes to mind - you’re just as likely to hear a poem about whose goats have been encroaching on whose territory. “Nabati,” says Ghassan Al Hassan, a Nabati scholar and a “Million’s Poet” judge, “speaks the language of the common people.”

The language of the people has changed over the last millennium, as have their concerns. Ancient Bedouin tribesmen were a notoriously bellicose bunch; titles like “By God, How Often Have I Raided” and “So What, Ibn Slem, If You Attack?” were commonplace. Today, while Nabati’s macho tendencies endure, poets tend to focus less on the power of their horses than the horsepower of their pickups. Tribalism has given way to nationalism. And where a traditional Nabati poet might have sung about his ability to use his fists, today’s will more likely talk up the goal-scoring abilities of his favorite soccer team.

The United Arab Emirates’ ruling classes, again, are spearheading the drive to shoehorn Nabati into contemporary contexts. The pop-culture glam of the “Million’s Poet” show is no accident: It represents a concerted effort to present the Nabati tradition in a format that the iPhone-owning masses will appreciate and understand. On the academic front, the government last year set up the Abu Dhabi-based Poetry Academy to help foster new Nabati poets and to establish a formal critical apparatus, something that old-school Nabati poets would likely have found mind-boggling.

There has also been a concurrent effort to preserve the tradition in written form, and even to translate it into English - a task akin to translating Italian into fish. Sheikh Mohammed, the ruler of Dubai and a prolific Nabati poet, last year published a book of English translations of his work, which includes the poem “Oh Victorious Arrow” (“Congratulations Hamdan, heartfelt congratulations/ Your horse for you is happy, strutting proudly”). The fact that the guy who’s currently in charge of running this modern megalopolis should spend his time penning odes to horses is an indication of how important Nabati has become to the emirates’ sense of self.

“Globalization is wreaking havoc on many aspects of local life,” says Sultan Al Amimi, another “Million’s Poet” judge. Nabati, he says, “is a way of preserving this way of life from cultural erosion.”

Cultural erosion is a hot topic in the Middle East right now. The fear of regional identities and values being overrun - by hedonism, materialism, moral relativism, and all the other isms generally associated with the West - lies at the heart of much of the hard-core religious revivalism you see here. In America, there’s talk of the Clash of Civilizations; here, people see themselves as taking a Last Stand, with Mecca as a kind of Alamo.

Few countries in the Middle East have more of a stake in this issue than the United Arab Emirates. In recent decades, the country has seen wave after wave of immigration; Dubai’s expat population is now said to be about 80 percent of its total. And these immigrants have brought with them everything from Tagalog karaoke to Bollywood blockbusters to happy hour cocktails. There are times when it’s easy to forget you’re even in an Arabic country, an extremely worrying fact for people who were born and bred here.

Partly because the United Arab Emirates values its tradition of welcoming outsiders, and partly because people here understand that their economy relies on an inflow of foreign labor, the country has not resorted to the kind of knee-jerk religiosity that some of its neighbors have. Instead, it has embarked on a kinder, gentler form of revival. You can hardly turn around these days without bumping into a heritage village. Faux-traditional architecture is cropping up in every corner of the country. And youngsters who a decade ago might have worn jeans and T-shirts now don the dishdashas and abayas of their forebears. Sure, they’ll wear these garments at shopping malls and go home afterwards to watch the latest episode of “Dexter” - the point is that the country is attempting to incorporate its traditions into the modern world, rather than trying to keep the modern world at bay.

This will not be an easy trick to pull off. Efforts to drag the past into the present will always involve an element of nostalgia, and nostalgia will always involve its own cultural conflicts - as you can already see in the Nabati revival. One contemporary female poet, for instance, writes about “My longing for a tent/ After an adobe house.” We don’t really believe that this woman longs to live in a tent, simply that she likes the idea of it. Her poem is a kind of fib. It also lacks the immediacy of traditional Nabati poetry. Then again, Nabati’s themes have always revolved around traditional desert life. Is a Nabati poem about breaking the heel of your Jimmy Choo still a Nabati poem? And if it is, why shouldn’t a guy who grew up in London write a moving eulogy to the Arabian camel?

It might just be that my own longing - For a brand new Range Rover/ After a Toyota Yaris - isn’t so far-fetched after all.

Chris Wright is an editor and writer living in Dubai. He can be reached at chriswrightdubai@hotmail.com.