The year that was

Squelette, yarnbombing, and other vocabulary to remember 2009

All the best-of lists of last year are now in recycling bins, and we’re all supposed to be firmly focused on the year ahead, but I can’t resist one final look back at 2009 - specifically, at my list of favorite words. As a lexicographer, it’s part of my job to keep an eye out for brand-new words, but I also keep a personal list of words that may not be entirely new, but are certainly new to me.

The best way for anyone, dictionary editor or not, to find new words is to look for them where they live, and that means reading. Popular science publications, and the magazine New Scientist in particular, are my favorite sources of new (or at least new-to-me) words. This past year I learned (among many others) blazar (a kind of galaxy with a black hole at the center), thundersnow (a snowstorm that includes lightning flashes), and bioweather (the number and concentration of microbes on a given surface or in a given area). New Scientist was also responsible for two of my favorite new units of measure for 2009, the wow, a proposed unit of measurement of surprise, defined as “the change in expectation caused by the arrival of new data,” and the lunalapin, which is a (proposed) measure of the sensitivity of the Planck observatory, equal to being able to detect the body heat of one rabbit on the moon.

Wired magazine is another great source for interesting words, even outside of their very good Jargon Watch column. In 2009, highlights included squelette (an abandoned, incomplete high-rise; or any building that is a ruin because it was never completed) and agnotology (the study of culturally constructed ignorance). But any publication can serve up a new word if you give it a chance: A freebie mag in a New York City hotel lobby gave me swatting, “spoofing 911 calls in order to draw a SWAT team to a target’s house, as a prank or harassment.”

Some of my favorite new-to-me words of 2009 came to me almost randomly - via Twitter, blog reading, and in e-mails from helpful folks who wanted to call things to my attention. Did you know that the shaft of an elevator is called a hoistway? Or that, for dog breeders, the decorative variations in a dog’s coat are called furniture? Or that a kaleidoscope with a clear faceted lens (so that the colors and patterns are created by the objects seen through the tube) is more properly called a teleidoscope? I also learned in 2009 that running a white cane along curbs and walls (as visually impaired people do to orient themselves) is called shorelining, that the artificial skin coverings for prosthetic limbs are called cosmeses, and that the preferred (if somewhat disparaging) term for denim shorts is jorts (from jeans+shorts).

In 2009, I also learned some words that referred to things I never realized existed, much less had a word - like yarnbombing, the practice of making knitted covers (or cozies) for public objects, such as lampposts, trees, and signs. There’s also tabistry, the practice of making clothes or fabric out of the pull tabs from soda cans, and hauntrepreneur, someone who sells haunted-house accoutrements, or who markets ghost tours. And in the category of “finally there’s a word for that” there’s gleng (to pull on the car door handle at the exact instant that the driver is attempting to unlock the door for you).

Because of my day job (I’m the CEO of a new dictionary website, Wordnik.com), I probably spend more time than most folks rummaging around in dictionaries old and new. The Dictionary of American Regional English gave me one of my all-time favorite words in 2009: mubble-squibble, which is what is known in most places as a noogie. The Century Dictionary - a fantastic multivolume dictionary from the early 1900s - introduced me to culicide (the act of killing mosquitoes), adelopod (an animal whose feet are inconspicuous or not apparent), disparple (to scatter), and phthongometer (an instrument for measuring vocal sounds). The Chambers Dictionary, a venerable Scottish publication that, sadly, closed its Edinburgh office at the end of 2009, gave me aegrotat, “a degree granted when illness has prevented the taking of examinations.” And the Historical Dictionary of American Slang - still in progress; it only goes up to the letter O - gave me ipsydinxy, “whiskey.”

As I get older it seems that by the time I hear a slang term it’s already passe, but a few of the slangier words I added to my list in 2009 were rando (for any unexpected or uninvited “random” person at a place or event) and (another new favorite) awesomepants, something that is even more awesome than plain awesome can convey.

For 2010 I expect to find (and share) more new words through Twitter (you can follow me there as @emckean) and plenty more “overlooked” words rediscovered in old books. You should keep a list, too - it’s totally awesomepants. 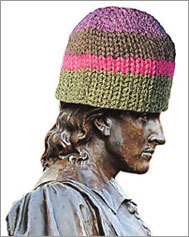 (Globe Staff photo illustration)
Your comment is subject to the rules of our Posting Policy
This comment may appear on your public profile. Public Profile FAQ