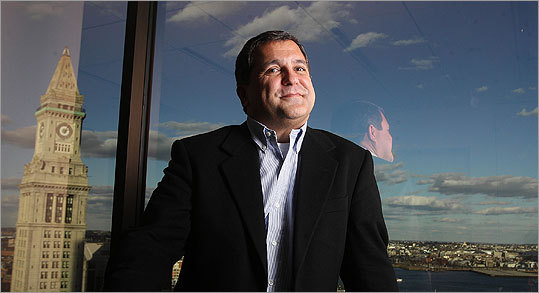 MARK HOSTETTER OCCUPIES an unusual perch in the financial world: he is both CEO of Vinik Asset Management, a $5 billion Boston hedge fund, and an ordained Presbyterian minister.

As an executive, he manages a firm that handles money in eye-popping quantities. As a minister, one of several associate pastors at the First Presbyterian Church of New York, he organizes seminars at New York’s Auburn Theological Seminary where CEOs discuss how they can embody personal and societal values, including secular ones, in their working lives. Hostetter, 50, walks a tricky line - we expect ministers to occupy the moral high ground, while money managers are paid to deliver profits first.

Despite anger nationally about the behavior of hedge funds and the rest of the finance industry, where a single-minded focus on high returns helped destabilize the economy, Hostetter says he rarely encounters people in his business who lack personal integrity - though he concedes that most know he’s also a minister and he may get people on their best behavior.

The system-shaking excesses of the last decade have Hostetter calling for a more moral capitalism, one in which people put the stability of the entire system above their own personal gain. He spoke with Ideas by phone from his office in Boston.

Ideas: Doesn’t the Book of Matthew say you cannot serve God and mammon?

MH: If you take traditional Christian theology, the economic system is part of God’s plan. In the parable of the talents, the servant that is rewarded is the one who utilizes that money - who isn’t scared of the money, isn’t paralyzed by it, but sees it just like anything else, as a tool to be utilized in promoting whatever God’s goals are in the particular context. There may be a preference for the poor because they are suffering, and God wants us to lift them out of that position, and we have a responsibility to do that.

Ideas: How do people on Wall Street react when they find out you’re a minister?

MH: Capitalist democracy is not necessarily inconsistent with values you may have as a Christian, a Muslim, or Jew or whatever your background may be. You can think of the system as a way to sustain an economy that provides for people so that you don’t have people living in the kind of human suffering that’s prevalent in the world. And you can make decisions not only for your own personal bottom line but also the integrity of the system.

Ideas: When you’re talking with people in the corporate world, how aware are they of their presence in the broader system you’re speaking of?

MH: The idea that you just go for the most money for yourself is something that would not be received well even in the most capitalist of board rooms. Greed, to the exclusion of other people, is not a value that either American society or our religious values support. People are not just automatons who follow the invisible hand of Adam Smith, marching in a lockstep capitalist-only kind of stereotype. You can’t, even in the most capitalist invisible hand context, justify abusing other people, or nastiness, or deception, or lack of integrity.

Ideas: But we all think of Michael Douglas and “Greed is good.”

MH: The extremes are the ones that potentially cause these huge collapses. There are people like that. I believe it’s a very small minority of people in business.

Ideas: What do you say to people who say there is not a place for morality in our economy?

MH: I think there are very few people who say the bottom line is the only thing that matters and no other values can inform your behavior except your bottom-line profit, regardless of what impact it will have on people or relationships or the system. Even at the height of this greed cycle, I think very few CEOs would give voice to that kind of perspective.

Ideas: This year, posted record profits, after it had taken bailout money the year before, and while most of the country was still mired in the wreckage of the economy. Is that wrong?

MH: It is a hard question. I come at it in two ways. Our system is not about making every person equal in salary or compensation, but it’s about making sure that everybody can live a life free from suffering and free to be able to achieve a happy, fulfilling life. What underlies the anger about the Goldman Sachs situation is there doesn’t seem to be the change of the greed/bottom line/taking-the-last-dollar-off the-table mentality that this crisis has made people acutely aware of.

MH: I’m not sure that he was saying it for the same reasons I am saying it. Corporations and partnerships that have benefited from the government having to bail them out or contributed to the stresses we’ve been feeling in the economy for the past couple of years … may have a responsibility that’s greater than just putting their ship in order and going back to the same way of doing things.

Ideas: What do you do if people do react poorly to your dual roles?

MH: You don’t have to wear your devil horns everywhere you go! People will see the way you behave, and the way you conduct your business life. Whenever you encounter someone who believes hedge fund managers are the reason for the failure of the economy, you hope they’ll listen and not tar everyone with the same brush, because there have been a few people who reflected a different value system than the one you conduct your own business on. I don’t encounter that a whole lot.

Ideas: How about when people ask you what it’s like trying to fit through the eye of the needle?

MH: In the Christian tradition, the idea is not that money is evil. That eye of the needle parable is saying it’s very difficult not to yield to the temptations of money and make money your god. And it doesn’t mean it can’t be done, and that you can’t utilize the economic system and money and conduct your vocation in a way that’s consistent with your underlying faith values.

Michael Fitzgerald is a writer based in Millis.