You can’t handle the truth

A respected scientist set out to determine which drugs are actually the most dangerous -- and discovered that the answers are, well, awkward 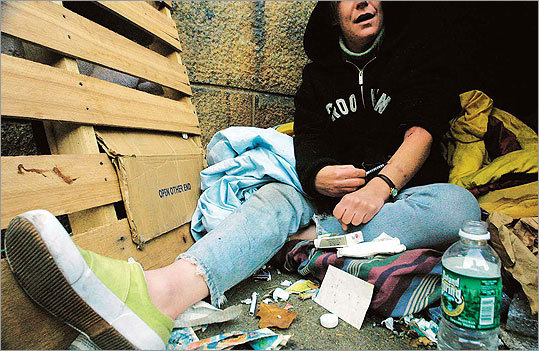 In the long and tortured debate over drug policy, one of the strangest episodes has been playing out this fall in the United Kingdom, where the country’s top drug adviser was recently fired for publicly criticizing his own government’s drug laws.

The adviser, Dr. David Nutt, said in a lecture that alcohol is more hazardous than many outlawed substances, and that the United Kingdom might be making a mistake in throwing marijuana smokers in jail. His comments were published in a press release in October, and the next day he was dismissed. The buzz over his sacking has yet to subside: Nutt has become the talk of pubs and Parliament, as well as the subject of tabloid headlines like: “Drug advisor on wacky baccy?”

But behind Nutt’s words lay something perhaps more surprising, and harder to grapple with. His comments weren’t the idle musings of a reality-insulated professor in a policy job. They were based on a list - a scientifically compiled ranking of drugs, assembled by specialists in chemistry, health, and enforcement, published in a prestigious medical journal two years earlier.

The list, printed as a chart with the unassuming title “Mean Harm Scores for 20 Substances,” ranked a set of common drugs, both legal and illegal, in order of their harmfulness - how addictive they were, how physically damaging, and how much they threatened society. Many drug specialists now consider it one of the most objective sources available on the actual harmfulness of different substances.

That ranking showed, with numbers, what Nutt was fired for saying out loud: Overall, alcohol is far worse than many illegal drugs. So is tobacco. Smoking pot is less harmful than drinking, and LSD is less damaging yet.

Nutt says he didn’t see himself as promoting drug use or trying to subvert the government. He was pressing the point that a government policy, especially a health-related one like a drug law, should be grounded in factual information. In doing so, he found himself caught in a crossfire that cost him the advisory post he had held for a decade.

The same issue is becoming a hot one in America - this fall the Obama administration took a baby step toward easing federal scrutiny of medical marijuana use, and a policy report due early next year is expected to emphasize addiction prevention and treatment over criminal enforcement. Opponents are already attacking the administration for its laxity, but Thomas McLellan, a newly installed White House drug official, has begun loudly pushing for policy that incorporates more science.

“We must increase the use of evidence-based tools at our disposal,” McLellan said in an interview last week.

But as Nutt’s case illustrates, that is tough to do. The more data we accumulate about drug harmfulness, the more it seems like the classification systems used by the United States, the United Kingdom, and other governments need to be dismantled - and the more it becomes clear that societies can’t, or won’t, take that step. Drug laws are rooted in history and politics as much as science. Our own culture embraces one intoxicant - alcohol - that Nutt’s ranking deemed far more dangerous than 15 other harmful substances. And even if it were possible to divorce drug politics from drug-use facts, some policy specialists say, letting science call the shots would be a bad idea.

Intoxication has been part of human culture since before recorded history. So have its consequences. A drug can cause all sorts of harms, some devastating, some minor: It can ravage the body of an addict, or simply make a user late for a meeting with the boss. Drugs can impoverish families, trigger deadly violence, cause cancer. In modern society, drugs drive crime and increase health costs for everyone.

To Nutt, a professor of neuropsychopharmacology at London’s Imperial College who chaired the government’s Advisory Council on the Misuse of Drugs, it made sense that laws and policies should take into account the harmfulness of the drugs themselves. But when he considered ways to improve the system, he discovered a problem.

“It became clear that [the government] didn’t have any systematic, transparent way of assessing drugs at all,” he said. “If you say drug laws are based on reducing harm, you have to actually know what kind of harm they cause.”

So about a decade ago, he and some colleagues set about to gauge the dangers of 20 substances as objectively as possible. This would not be a measurement with calipers and a scale - drug risks are inevitably subjective, depending on factors like an individual user’s tolerance, the amount used, and the duration of use. But Nutt also knew he could create better data than anything the government was currently employing.

He and his colleagues assembled a range of independent experts and asked them to score each drug in three categories - its physical effects on the user, the likelihood of addiction, and its impact on society. The group included addiction specialists registered with the Royal College of Psychiatrists, as well as people with expertise in chemistry, forensic science, and police work.

They gave the specialists a detailed list of parameters to consider. In assessing the addictiveness of, say, cocaine, they would separately rate its pleasure, psychological dependence, and physical dependence, and the ratings would be combined to create an overall risk factor. After a series of meetings and discussions, the rankings were determined by averaging scores across all the categories. The result was a paper published in the public-health journal The Lancet in March 2007.

Number one on the experts’ list was an easy call: heroin. It’s extremely addictive and, by any measure, destructive to the user and the society around him. Cocaine came in second, followed by barbiturates and street methadone.

Then the list got interesting. Alcohol, which has always been legal in England and was only briefly outlawed in the United States, took the fifth position, above tobacco (9), marijuana (11), LSD (14), and ecstasy (18). The least harmful drug in all respects was khat, a stimulant derived from the leaves of an African shrub.

Included in the Lancet paper was the authors’ recommendation that the government should reclassify drugs to reflect the harms they cause. “We saw no clear distinction between socially acceptable and illicit substances,” they wrote, suggesting “a more rational debate” on drug policy, based on “scientific evidence.”

The ranking - nicknamed the “drug league table,” after the British term for sports standings - lay quietly, more or less ignored by the public and politicians, until King’s College issued a press release in October based on a lecture Nutt had given in July. Nutt thought he was making much the same point he made in the medical journal two years earlier: If we looked at harm objectively, we would engineer a drastically different set of drug policies than the ones we now use.

He was swiftly booted from his government position. Home Secretary Alan Johnson said Nutt had crossed a line. He “cannot be both a government adviser and a campaigner against government policy,” Johnson told The Guardian newspaper.

“It was a funny, kind of petulant reaction,” Nutt told the Globe, “all about machismo and politics. We’re harder on drugs than you, we’re tougher.”

Suddenly, Nutt was everywhere - the papers, the BBC, YouTube, a Facebook page started by his backers. Critics accused him of sending England’s youth a mixed message about drug use. Supporters charged the government with stripping the professor of his right to speak freely.

Amid the charges and countercharges, others wondered whether, beneath all the controversy, the government shouldn’t just start paying more attention to that list.

If Nutt’s list is accurate - if we really do know which drugs are really bad and which are relatively benign - the next step is figuring out how to make use of that information.

It might seem obvious that the most harmful drugs should receive the most attention from the government, with beefed-up prevention and treatment programs, and tougher punishments for producers and distributors. And to conserve their limited resources, it might make sense for drug officials to stop worrying about the least harmful substances, even decriminalizing or legalizing them.

But real-world drug policy is not like that. To a certain extent, say analysts, legal drugs are acceptable and illegal ones are dangerous because, well, because they’re already illegal.

“There’s a crazy kind of logic that argues, about some currently illegal drug, ‘Look how dangerous it is! You couldn’t possibly legalize a drug as dangerous as that!’ ” said Mark A.R. Kleiman, a professor of public policy at UCLA. The fact that a drug is against the law makes people overestimate its risks, he said, while legal status causes them to underestimate dangers.

Politicians tend to follow that same line of thinking, leaving socially acceptable legal drugs alone, while making easy prey of would-be liberalizers. In the United States, for instance, it would be politically insane to call for the legalization of the least harmful drugs on Nutt’s list - khat, GHB, and steroids - while campaigning to outlaw tobacco.

One indisputable fact that emerged from Nutt’s study is this: We have assigned a high social value to booze. Alcohol causes many of the harms associated with “harder” drugs - lots of people die or become deeply dysfunctional because of drinking - yet it has been entrenched in society for so long that scientific evidence of its hazards relative to other intoxicants doesn’t get much of a public hearing.

Kleiman and other experts - including Nutt - are not suggesting that either Britain or the United States should ban alcohol. America tried that once, and even during Prohibition, people didn’t stop drinking - they simply built a system of illegal manufacturing and distribution big enough to satisfy their thirst. Instead, Kleiman believes a good strategy on alcohol should include increased taxes to discourage drinking - young people and heavy drinkers are price-sensitive - and an outright ban on sales to people who have been convicted of drunken driving or other alcohol-fueled crimes.

Of course, that would require new laws, and more political wrangling. How many convictions? How long of a ban? If the science is complicated, the politics would be more so. The fight would last more than a few rounds.

Nutt, for one, seems ready to go the distance. “The majority of people in [Britain] are more damaged by alcohol than any other drug,” he said. “Let’s get the scaling of harm right.”

For drugs that are currently illegal, he said, that means having prevention efforts and laws that are proportionate to their dangers. For instance, British law allows up to five years imprisonment for marijuana possession, a penalty Nutt called “infantile and embarrassing.” McLellan, the White House drug adviser, echoed him, saying jailing pot smokers “is idiocy, a really bad use of resources.”

But drug law will never be as simple as making a list, and even experts say it shouldn’t be. At a certain point, scientists should excuse themselves from the discourse, Kleiman said. Intoxicants are part of our culture in ways that a list can’t sort out for us.

“Science gives you facts about the world,” he said, “and you have to assign values to those facts. It doesn’t tell you what’s worth having and what’s not worth having.”

Mark Pothier is the Globe’s senior assistant business editor. He can be reached at mpothier@globe.com. 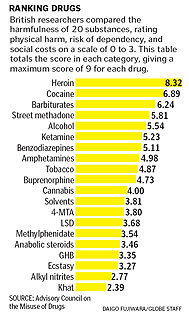