Who took my ’stache?

The sad and curious exile of the American mustache

IF YOU DIDN’T know anything about Steven Soderbergh’s “The Informant!,” which opened last month, you could at least deduce from the poster that it was a comedy. Just above Matt Damon’s popped-open mouth sits a large brown mustache. It looks like a caterpillar. Even if “The Informant!” were the most serious movie ever made, that mustache would be funny.

On Burt Reynolds or Billy Dee Williams, movie stars of a generation ago, a mustache was an alluring matter of fact. Before them it was Douglas Fairbanks, William Powell, and Clark Gable. On Damon’s adolescent-looking face, a mustache is a joke. There’s nothing stylish or sexy about it.

For most of the 20th century, the mustache was a serious option for follicular self-expression - an elastic emblem of masculinity. Cowboys and truckers wore them big and thick. Movie stars and certain roués wore them faint or thin. For comics like Groucho Marx and Charles Chaplin, the mustache wasn’t the gag; it was just part of the persona. Teddy Roosevelt and William Howard Taft took mustaches to the White House. Mike Ditka took his to the Super Bowl. If at any point during the 1970s you threw a rock, the gentleman you hit was probably wearing a mustache.

There’s nothing inherently wrong with a mustache. Worn with conviction, it’s just as attractive as any of these. It’s not hard to maintain. So why can’t the mustache have its comeback?

The answer lies in something deeper than maintenance. It’s about manliness. There’s an unapologetic ruggedness to the mustache that’s been gradually chastened and civilized out of popular American culture. Americans just aren’t as comfortable with masculinity as they were 30 years ago. Today, men wax their chests. They do yoga. As one barber I spoke to erupted, in a robust Russian accent: “There are no mustaches anymore because there are no real men!”

TO APPRECIATE WHAT has happened, you need only look at two notorious movie mustaches. In 1958, Charlton Heston wore a mustache for “A Touch of Evil,” one of those long thin numbers that parted in the middle. Watching the movie today, the mustache feels corny - a prop to make his narcotics cop seem Mexican. But it also feels like a serious gesture. On Heston, it conveyed real authority and virility. You’re inclined to take the mustache seriously because Heston did.

Contrast that with the hedge of a mustache that Sacha Baron Cohen grew for “Borat.” It accessorized the character’s cheap suit, weird gait, and knowingly bad English. Cohen is a handsome guy, and he grew a mustache to show he wasn’t serious - to make Borat seem more foreign, less attractive, and, by the movie’s naked hotel climax, kind of unappetizing. It was a mustache that you mockingly draw on a subway billboard.

The difference between Heston’s and the mustaches that Cohen and Damon wear, as good as they are in their respective films - comedies both - is that for the younger actors, those mustaches are wearing them. This is also how mustaches feel whenever they make a half-hearted run at a pop-culture comeback. Brandon Flowers, the Killers’ fresh-faced front man, kicked up a hot fuss a few years ago after he grew a mustache. He was accused of overseriousness - but no one seemed to take his new facial hair, or his band’s music, as seriously as before. It was as if we could hear the mustache in the songs. By the release of the band’s next record, Flowers was clean-shaven again.

Wittingly or not, Flowers wore what has come to be known as an ironic mustache (he has said he grew it merely because he could), the irony stemming from the idea that the mustache has become a symbol of uncool. The hipster’s appropriation is an extension of the vintage-store experience - an antique you wear on your face. This isn’t facial hair per se. It’s facial hair in quotation marks, concentrated in such hipster ghettos as Austin, Texas; Williamsburg, Brooklyn; and Allston.

Every now and then the mustache surfaces as a trend story in the wider culture, but that seems determined by whether Brad Pitt or Denzel Washington happens to be wearing one for a role. In talking to barbers in the city, I couldn’t find one who’d trimmed more than a few mustaches in the last couple of years. Between customers the other day, Youssef Aboura stood outside State Street Barbers in the South End, and explained that of his 200 or so regulars, only about seven have a mustache - “and they’re all in their 50s,” he said. The most serious one he’d seen recently was for a competition. When did the mustache go from staple of the American face to sport?

The answer, it seems, is some time around the 1970s, when facial hair moved beyond Vietnam-era shagginess and the mustache was just the thing to do. Mustaches were manly. They were suave. Even among Ivy League college men, having a mustache was a way to seem a bit wild without being woolly.

But something began to happen to the mustache. In attaining ubiquity, it also became entwined with two increasingly visible subcultures: pornography and gay men. John Holmes and Ron Jeremy wore mustaches in their X-rated movies. And more than anything, the mustache said bathhouse and late-night cruising. It said, “Y-M-C-A.” The Village People conflated blue-collar masculine iconography and gay fetish until it became impossible to see law enforcement or the American West without a glittering disco ball hovering over it. The mustache became the symbol of this inversion. There was something costume-y about it. It was the beginning of a joke we’re still telling.

To be a guy became a kind of adolescent joke - think Jackass and the G4 network - and to be a man, a grownup, meant shaving your upper lip, and possibly maintaining your eyebrows. There are more college-educated American men now that there have ever been, and while education can create self-confidence, it’s also good at creating self-consciousness. You could say that a huge swath of American men have simply misplaced the self-confidence required to wear a single strip of hair on their lips.

We’re no longer comfortable with Charlton Heston’s brute primacy, or Clark Gable’s bravado, and this is never clearer than when modern celebrities try to wear a mustache - really try, instead of wink-wink try. When Jake Gyllenhaal shows up in the latter half of “Brokeback Mountain” in a mustache, he’s trying to wear it for real. He’s supposed to be a cowboy. But every time I saw the movie, the audience laughed. Gyllenhaal was a metrosexual in mustache drag, and they knew it. 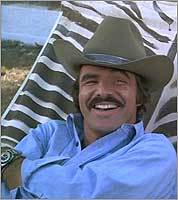