Over the last century, the conservation movement has created some beautiful parks - and millions of refugees. 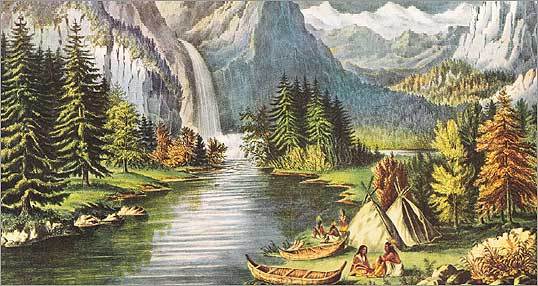 LAFAYETTE BUNNELL, AMERICAN explorer and wilderness romantic, first rode into the bucolic stillness of Yosemite on March 21, 1851. He was on a voyage of discovery. Once in the valley he thought he had arrived, if not in heaven, in Eden. "I have seen the power and glory of a supreme being," he wrote in his journal, and "the majesty of his handiwork."

Bunnell's attitude toward the people who actually lived in the valley was decidedly more ambiguous. At times he romanticized the lifeways of the Miwoks who had settled there some 4,000 years earlier. But he also said there was no room for them in the West, calling them "yelling demons" and "overgrown vicious children." The whole territory, he wrote, should be "swept of any scattered bands that might infest it."

Accompanying him that day was one of the most ferocious militias in western American history, the Mariposa Battalion, commanded by James Savage. A veteran of Indian wars, Savage was there with one blunt aim: to rid Yosemite of its natives. Bunnell, who is remembered today largely for his lyrical prose about nature, stood by and watched while Savage and his men burned acorn caches to starve the Miwok out of the valley. Seventy were physically removed. Twenty-three were later slaughtered at the foot of El Capitan, the towering granite obelisk that has become a totem of California wilderness. Although it took some years to complete the task of creating a fictional wilderness in Yosemite, all the valley's residents were eventually evicted, and in 1914 their land became a national park - no natives welcome.

This tactic became known as "the Yosemite model" and was replicated around the country, and eventually around the world. At most of the major parks created in America - Yellowstone, Grand Canyon, Mesa Verde, Mount Rainier, Zion, Glacier, Everglades, and Olympic - thousands of tribal people were expelled from their homes and hunting grounds so the new parks could remain in an undisturbed "state of nature." In the century that followed, millions of tribal natives around the world were forcibly evicted from wildlife reserves and national parks such as the Royal National Park of Australia, Banff in Canada, and Tongariro in New Zealand. In East Africa, the Serengeti and Amboseli National Parks were formed this way; on the border of the Bwindi Impenetrable Forest of Kenya, Batwa pygmy refugees still camp in hovels hoping one day to return to their forest homeland.

Refugees from conservation have never been counted; in fact they're not even officially recognized as refugees. But the number of people displaced from traditional homelands worldwide over the past century, in the interest of conservation, is estimated to be close to 20 million, 14 million in Africa alone. It is a sad history, and one that has forced conservationists to reevaluate the hero status of their movement's founders, and to reconsider the idea of protecting biological diversity by removing humans from the mix.

The conservation establishment desperately wants the world, particularly its funders, to believe it is working hand in hand with indigenous peoples - two august and ancient forces dedicated to protecting the world against the depredations of development. But in fact conservation and native people remain locked in a deep struggle over what it really means to "preserve" something, and whether that something should be nature or culture.

The conflict is also compelling the conservation movement to grapple with the effects of its own century-long blunder, and with its origins as an American movement driven largely by nature romantics and aristocratic men determined to protect their hunting grounds. Not only has it dispossessed millions of people who might very well have been excellent stewards of the land, but it has engendered a worldwide hostility toward the whole idea of wildland conservation - damaging the cause in many countries whose crucial wildland is most in need of protection.

The beautifully written and widely read essays and memoirs of early American eco-heroes like Bunnell, John Muir, Samuel Bowles, George Perkins Marsh, and Aldo Leopold inform a conservation mythology that until quite recently separated nature from culture. In their writings, natives and early settlers of frontier areas were portrayed as reckless, irresponsible abusers of nature, with no sense or tradition of stewardship, no understanding of wildlife biology, and no appreciation of biodiversity. It was the "manifest destiny" of conservation leaders, then, to tame what Michael Wigglesworth had earlier described poetically as:

A waste and howling wilderness

But hellish fiends and brutish men

This was not lost on native peoples themselves, and they began to resist the idea that they were less important than the land they lived on. In 1923, a Mohawk chief named Deskaheh led a small delegation of American Indians to Geneva, Switzerland. There they called upon the recently formed League of Nations to defend the rights of their people to live under their own laws, on their own land, and according to their own faith. The delegation was turned away at the gate. But in the decades that followed, the rights of aboriginal peoples grew into a movement.

As the world shrank and transportation accelerated, inhabitants of the most remote villages began to discover that they were not alone. There were others like them on almost every continent - people with unique dialects, diets, cultures, and cosmologies who were at best misunderstood, at worst oppressed by the dominant nationalities that surrounded them. These indigenous groups began to communicate with one another and to meet, and through interpreters they learned of ways that aboriginals in other societies had succeeded in protecting their cultures and recovering their sovereignty, independence, and homelands lost to colonization. They began to resist assimilation and to petition for recognition of territorial rights.

Coming to their aid in the "developed" world were people who valued cultural diversity as much as biological diversity - anthropologists in particular, as well as human rights lawyers, social activists, and members of organizations like Cultural Survival, the Forest Programme, and First Peoples Worldwide. Members of this growing social movement established links, formed networks, and founded new nongovernmental organizations, from the Arctic to the Kalahari, some with fewer than 100 members, others with millions.

As these movements gained force, it was perhaps inevitable that they'd come in conflict with conservationists. And as conservation became global in its reach, conflicts with large international organizations like the Worldwide Fund for Nature, the Nature Conservancy, the Africa Wildlife Federation, and Conservation International occurred on every continent. The sad consequence of this discord is that proven land stewards like the Maasai of Eastern Africa, the San Bushmen of Botswana, the Karen of Thailand, the Ashaninka of Peru, and the Kuna of Panama have in one way or another declared themselves "enemies of conservation."

It has taken transnational conservation a long and painful century to see the folly of some of its heroes - not only the early writers, but more recent leaders as well. Paleoanthropologist Richard Leakey, as minister of wildlife conservation in Kenya, denied the existence of indigenous peoples in his home country, and called for the removal of all "settlers" from game reserves and other protected areas.

Today, however, all but the most stubborn and entrenched enclose-and-exclude conservationists are willing to admit that conflating nature with uninhabited wilderness, and defining occupants as merely "first visitors," is specious reasoning. And they have come to realize, from simple observation, that even if they don't own it, indigenous people manage immense areas of biologically rich land. And most, although not all, are managing it well.

I have traveled all five inhabited continents, visiting hundreds of indigenous communities, some in conflict with western conservation and others in harmony. While tension persists, I have found an encouraging dialogue growing between formally educated wildlife biologists, who once saw humanity as inimical to nature, and ancient aboriginal societies that have passed their remarkable ecological knowledge from generation to generation without a page of text or the benefit of PowerPoint. And I have been heartened to find, mostly in the field, a new generation of conservationists who have come to realize that the landscapes they seek to protect contain high biodiversity in part because people who have been living there, some for thousands of years, are living right.

Out of this realization have grown two successful new categories of wildland conservation. In some places they are called Community Conserved Areas; in others, Indigenous Protected Areas. In both cases the traditional inhabitants of the area not only remain in their homeland, but as legally tenured residents, play an active role in the conservation of biological diversity. They work side by side, as equals, with representatives of global conservation. This is happening, albeit slowly and against some reservation on the part of some conservation leaders, on every continent.

As cultural ecologist Gene Anderson observed, many of the world's traditional societies long ago came to "some kind of terms with their environment, or they would not have lasted long enough to become 'traditional.' " They are, in the language of ecology, living sustainably. And it seems self-evident now that the only way global conservation is going to succeed in its mission of preserving wild places and biodiversity is to end the counterproductive practice of evicting these proven land stewards from their homelands, and instead work together with them in developing sustainable ways of living.

Mark Dowie is an investigative historian. This article was adapted from his seventh book, "Conservation Refugees: The Hundred Year Conflict Between Global Conservation and Native People," and portions of the article appeared in Resurgence, Orion, and Stanford Social Innovation Review.