How a forest fire may have pushed Thoreau to Walden Pond

BY THE SPRING of 1844 Henry David Thoreau had accomplished almost nothing. He was 26 years old and had spent the better part of his life more or less adrift. In the seven years after graduating from Harvard, Thoreau tried to support himself in a variety of ways, as a teacher, tutor, writer, surveyor, and as a general handyman. He lived for a time with his friend and mentor, Ralph Waldo Emerson, and later in New York City with Emerson's brother, only to return to Concord to reside once again with his own family.

Then, in the summer of 1845, Thoreau built a solitary cabin at Walden Pond, and set about the great venture in simplified living for which he would become famous. Over the course of the next two years - some of the most productive of Thoreau's life - he recorded meticulous observations of nature in his journal, revised the manuscript of his first major work, "A Week on the Concord and Merrimack Rivers," and completed the first draft of his magnum opus, "Walden, or Life in the Woods." It is in "Walden" that Thoreau announces "the mass of men lead lives of quiet desperation," and it is here that he famously urges his readers to "simplify, simplify." "Walden" established Thoreau's reputation as one of America's great literary figures, and to this day, both the book and the pond are synonymous with naturalism, environmentalism, and the austere pursuit of self-reliance.

So what finally motivated Thoreau to leave the comforts of his family home and embark on this radical experiment? The most common explanation is that Thoreau did so at the urgings of Ralph Waldo Emerson, William Ellery Channing, and other friends who were eager to see a promising young man fulfill his potential.

But there is one curious event in the life of Henry David Thoreau that has received little attention, and which may have been a formative event, influencing not only his decision to sequester himself at Walden Pond, but also the development of his environmentalist philosophy. On April 30, 1844, Thoreau started a blaze in the Concord Woods, scorching a 300-acre swath of earth between Fair Haven Bay and Concord. The fire was an accident, but the destruction of valuable woodland, the loss of firewood and lumber, and the narrowly avoided catastrophe that almost befell Concord itself angered the local residents and nearly ruined Thoreau's reputation. For years afterward, Thoreau could hardly walk the streets of his hometown without hearing the epithet "woods burner."

That the father of American environmentalism could have been the scourge of the Concord Woods may seem too ironic to be true. Yet, not only did this unlikely event actually occur, but it seems quite possible that, given Thoreau's general lack of direction at the time, as well as his growing interest in pursuing a career as a civil engineer, America's first great naturalist might not have undertaken his Walden experiment at all, had it not been for the forest fire he sparked a year earlier. The fire happened at a time when Thoreau seemed desperately in need of some catalyst to convert his thoughts into action.

There is no shortage of ruminations on fire and firefighting in Thoreau's writing. At the beginning of "Walden" he talks of the penance he sees the people of Concord performing every day in the form of the labor required to live in a society fixated on material success, and he compares them with "Bramins" sitting exposed to flames. In "Henry David Thoreau: A Life of the Mind," Robert D. Richardson goes so far as to suggest that the catastrophe in the Concord Woods might have even been the source of the dreams about "fire and wind-whipped showers of sparks" that Thoreau later describes in his "Ktaadn" essay. However, it would be a mistake, an oversimplification, to read all of Thoreau's later work through the lens of the Concord fire. Rather, the significance of the fire, occurring when it did, may be that it set in motion a series of events that might not otherwise have happened.

The third of four children, Henry David was born to John and Cynthia Thoreau in Concord on July 12, 1817, and these environs are widely credited with inspiring his love for nature. His father made several unsuccessful attempts at farming before finally opening a small pencil factory in 1823. While not poor, the Thoreaus were a family of modest means, living in rented lodgings until 1844, when the success of the pencil business finally enabled them to build their own house in Concord.

Henry exhibited more scholarly interests than his siblings, but by the time he was 16 he preferred working with his hands, and seemed inclined to pursue a career in carpentry.

Nevertheless, John and Cynthia were determined to send him to Harvard, even though they found it difficult to meet the annual college expenses of $179. After graduation, Thoreau did not have a clear sense of how he would spend his days, aside from hiking through the New England wilderness. He and his brother John opened a school in 1838, but they were forced to close its doors three years later, due mainly to John's poor health.

Thoreau was writing regularly during this period, but he found few journals, other than the Transcendentalist magazine The Dial, willing to publish his poems and essays. Unable to support himself by writing, Thoreau moved in with the Emersons in April 1841, earning his keep as a handyman. After two years, he grew restless and arrangements were made for Thoreau to tutor Emerson's nephews in New York. While living in Manhattan, Thoreau met the likes of Horace Greeley, Henry James Sr., and the editors of some leading periodicals of the day, but no one would publish his writings.

Discouraged, he returned to Concord in 1843 to live with his family, and he resumed working for his father's pencil making business. John Thoreau & Co. manufactured what were regarded as the best pencils in America, and this success was partly due to Henry's earlier rediscovery of an old formula for blending graphite with Bavarian clay. So, by the spring of 1844, with his career as a teacher and writer stalled, Thoreau seemed on track to lead a very different life as a pencil maker.

Then, at the end of April, Thoreau went boating with his friend, Edward Sherman Hoar. They caught a mess of fish and Thoreau built a fire in a tree stump near the water's edge to cook a chowder. The winds were strong and the woods were exceptionally dry from near-drought conditions. The fire leapt from the stump, into the dry grass, and then rushed toward the trees.

Thoreau and Hoar tried to extinguish the flames on their own, stomping in the burning grass and beating the flames with a board from their boat. But once the fire reached the trees, they knew there was no stopping it without help. Hoar set out for Concord in the boat, and Henry ran through the woods ahead of the flames, seeking help nearby. He encountered one farmer who refused to help him, because he thought the fire was "none of his stuff." Thoreau ran on, eventually encountering an owner of the woods then ablaze. The man ran to Concord to summon the town, and Thoreau, exhausted, climbed to the top of Fair Haven Hill to wait for help and watch the woods burn.

The forest turning to ash before him was an old one of pine, birch, alders, oaks, and maples, large trees that provided ample fuel and helped the fire soar high into the sky. The speed and ferocity with which the wind-driven flames spread through the drought-stricken woods must have been terrifying, and Thoreau later described how the huge pine trees exploded as if they were powder. More frightening still was the realization that there was nothing to keep the fire from spreading all the way to the town of Concord itself. The fire burned for a day until volunteers subdued it with hoes and shovels and lit backfires to deprive the blaze of its fuel.

To understand the significant impact of the loss, modern visitors to the area must realize that there are actually more trees surrounding Concord and Walden today - thanks to 20th-century reforestation efforts - than stood there at Thoreau's time. By the mid-19th century, the forest had been depleted by Concord's rapid growth as a transportation hub, the construction of the Fitchburg Railroad, and the spread of agriculture. The Concord Woods and the woods at Walden, though privately owned, represented some of the area's last parcels of untouched forest.

The Concord Freeman for May 3, 1844, estimated damages at over $2,000, remarking: "It is to be hoped that this unfortunate result of sheer carelessness, will be borne in mind by those who may visit the woods in [the] future for recreation." According to Walter Harding's seminal biography "The Days of Henry Thoreau," "for years Thoreau had to endure the whispers of 'woods-burner' behind his back."

There is evidence in Thoreau's journals that the guilt over what he had done stayed with him. In 1850, six years later, he recounts the incident in an entry both remorseful and defensive. He admits he "had felt like a guilty person - nothing but shame and regret," but he insists that he soon realized his guilt was unfounded. "I have set fire to the forest, but I have done no wrong therein . . . it was a glorious spectacle, and I was the only one there to enjoy it."

Thoreau describes the fire as if it were a living thing, as glorious as the rest of the landscape, offering insight into his particular view of nature. The natural world is not just the green space of plants and animals, divorced from the world of people; nature includes everything that is. Thoreau argues that the fire was part of nature and was only consuming its natural food.

Thoreau dismissed the idea that he had committed any transgression against the landowners, but the offense to nature weighed heavily on his mind, perhaps even more than he was willing to admit. He tried to distinguish himself from the men who claimed ownership of the burnt woods by insisting that he felt the tragedy more acutely: "I felt that I had a deeper interest in the woods, knew them better and should feel their loss more, than any or all of them." Indeed, he sounds truly saddened by the terror he visited upon the animals when he describes the squirrels fleeing the flames and the birds that dashed themselves into the smoke.

A few months after the fire, Emerson purchased a plot of land at Walden Pond in order to protect it from woodcutters. And in March of the following year, Channing wrote to Thoreau, urging him to go to Emerson's plot at Walden and begin the "grand process of devouring yourself alive." Thoreau moved to Walden four months later. Perhaps he sought refuge from the angry people of Concord, perhaps he felt compelled to atone, somehow, for his offence, or perhaps the fire awoke him to the fragility of life: nature's, man's, his own.

Years before the fire, Thoreau wrote in his journal, "To regret deeply is to live afresh." And later in "Walden" he wrote that he came to the woods because he did not want to die having never lived. Perhaps this keen sense of urgency - the impulse to live the life he has imagined before it is too late - derives in part from Thoreau's having witnessed how quickly an unthinking act can turn tragic. 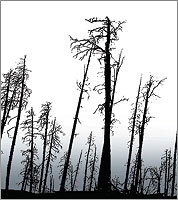