Q & A with Alyssa Picard

How did Americans become so obsessed with their teeth?

IN 2007, SHORTLY after he became a US citizen, writer Christopher Hitchens consigned himself to a dentist's chair to bid farewell to his characteristically "British teeth." After a set of veneers had been applied, Hitchens announced that he felt as if the procedure "was part of my new passport to Americanization."

Americans are obsessed with teeth. A beaming smile is the ultimate testament to American prosperity and self-confidence. It's as easy to identify an American abroad by what's inside his mouth as by what comes out of it. Yet, at the beginning of the 20th century, Americans placed such little value on oral health that they would rather have teeth pulled than pay for restorative treatment. How did possession of a set of straight, white teeth become so important?

Alyssa Picard's new book, "Making the American Mouth: Dentists and Public Health in the Twentieth Century," chronicles the shift. Dentists, she recounts, enthusiastically launched public health programs in schools and factories that both raised the status of their own profession and convinced Americans that an attractive smile wasn't just a matter of vanity, it was an essential ingredient in upward mobility.

As a result, the popular image of dentists changed from the barely educated butchers of the early 20th century to the highly skilled practitioners of today. Picard also describes how the dental establishment gradually persuaded Americans that dental care is an individual responsibility they should be prepared to pay for out of their own pockets.

Picard spoke to Ideas by telephone from her home in Ann , Mich.

IDEAS: Why do Americans have such amazing smiles?

PICARD: There's a certain subset of extremely visible Americans who have fantastic teeth, and there's a way in which getting that high-end care has become a rite of passage for people in the middle and upper-middle classes. . . . We have a culture in the United States - a popular culture and certainly a medical culture - that encourages the belief that we're all exceptions. You could be the next top model, the American Idol. . . . There's a very high premium on aspiration and on the physical manifestations of that.

IDEAS: How did good teeth become a mark of good citizenship?

PICARD: In the early 1900s, dental public health programs were of a piece with . . . other programs to coerce or compel or persuade immigrants to behave more like Americans. That manifested itself not only in programs of care and hygiene and education but also in the direction of diet and behavior and all kinds of stuff. And dentists at the time were interested in raising the status of the profession and in helping to create a level of education among potential patients that would help to drive out quacks.

IDEAS: The introduction of fluoridation into the public water supply in the middle of the 20th century had a huge impact on both patients and practitioners.

PICARD: Fluoridation reduced dental decay by as much as 60 percent.

IDEAS: So, dentists saw it as a triumph?

PICARD: Absolutely. They were proud of the professional contribution they had made to public health in the United States and really regarded it as one of the principal achievements of the profession.

IDEAS: In the early part of the last century, the dental profession pushed for public health programs like school and workplace clinics, but after fluoridation, that focus disappeared. Why?

PICARD: Dentists were extremely disillusioned by their experience of attempting to persuade people of the need for fluoridation of public water supplies. . . . Almost half the time when it was put to a popular vote, Americans did not take dentists' word for it. If you look at their journals, where they talk to each other, you see dentists getting angrier and angrier. They can't understand why people aren't listening to them.

IDEAS: After fluoridation, more Americans signed up for orthodontic work . . .

PICARD: One of the arguments dentists made for fluoride was that if your teeth don't fall out, the teeth that are still in your mouth aren't going to move around as much, and you're not going to need as much orthodontic work to correct misalignment of teeth. . . . But the flip side was an arms race of what it means to be good-looking. People's standards increased. You see this escalation in other areas including makeup, cosmetic surgery, weight training, physical culture, and everything else. . . . There's a certain amount of pecuniary interest involved also.

IDEAS: So, there are two extremes in American dentistry, with some patients undergoing a range of cosmetic treatments and others going untreated?

PICARD: Americans tend to be very turned off by the idea of making healthcare a socially shared expense, which is ultimately the answer to the problem.

IDEAS: You work today as a negotiator for a labor union. How has that affected your view of the American dental establishment?

PICARD: Employees are skeptical of any alterations to our insurance plans that might require us to change our healthcare practitioners. We're all convinced that the dentists or physicians we have are the best out there. We tend to believe that what we already have is better than our fears of whatever might be coming next. This work has given me a vivid understanding of the reasons why professionals' arguments against change in the healthcare finance system are so persuasive to patients, even when the statistical evidence suggests that the socialization of health- and dental-care costs would result in better outcomes for all of us.

June Thomas is the foreign editor at Slate magazine. 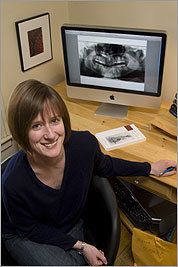