What we get wrong about the passive voice

IN THE DECADES since Ronald Reagan's famous non-apology for the Iran-Contra scandal - "mistakes were made" - we've gotten used to treating the passive voice as a shady customer. It's shifty and craven, weak and flabby, we say. But do we have any idea what we're talking about?

The linguists at the popular blog Language Log have been tracking the use of the term "passive voice," and they say the answer is often no: People who denounce the "passive" are frequently picking on some other kind of verb. And last week it happened in that exemplar of editing excellence, The New Yorker.

In her story on Bernie Madoff, Nancy Franklin quoted Madoff's statement to the court: "When I began the Ponzi scheme, I believed it would end shortly and I would be able to extricate myself and my clients." Then she added: "As he read this, he betrayed no sense of how absurd it was to use the passive voice in regard to his scheme, as if it were a spell of bad weather."

"Began," "would end," "extricate" - where's the passive verb? ("Madoff was imprisoned" - there's a passive for you.) And when The New Yorker can't identify a passive, wrote Language Logger Mark Liberman, it's clear that the popular notion of the verb form has parted ways with the grammarian's definition.

The new sense is "crystallizing around notions of passive as 'unassertive,' 'lacking in force,' 'failing to take responsibility,' " Liberman writes. Voice has also lost its official status, he says, and is now taken to mean simply "mode or style of expression."

And once people think "passive voice" means no more than "limp verb," any construction more subtle than "Sally likes candy" may find itself scapegoated as a passive. Examples don't exactly abound, but they aren't rare, either: A blog at the Atlantic described "[Banks] that have undergone this . . . test" as passive. The Seattle Post-Intelligencer found a passive in "Of scenic investiture there was virtually none." And as if to prove Liberman's point, a Tampa Tribune writer used the term with no grammatical meaning at all: "Doctors . . . have specialized expertise and medical argot; we have these flawed bodies and the passive voice."

Of course, this wouldn't be happening if we hadn't started dumping on the passive voice. And I do mean "we"; this is not an ancient prescriptive tradition, but a recent US fetish. Linguist Arnold Zwicky found the passive first described as a weakness in US writing handbooks of the 1930s and '40s, in discussion freighted "with images of strength, muscularity, and action (that is, symbolic masculinity)."

George Orwell spread the anti-passive gospel in "Politics and the English Language," his famous (and passive-laden) 1946 essay. American students imbibed it from Strunk and White's "Elements of Style," though probably a few of them noticed - as linguist Geoff Pullum did - that the book's section on the passive employs the passive: "Many a tame sentence of description or exposition can be made lively and emphatic by substituting a transitive . . . for some such perfunctory expression as there is."

All good writers use the passive voice. Orwell actually uses it while criticizing it: In bad prose, "the passive voice is wherever possible used in preference to the active," he writes. He could have recast that sentence, but his focus was on the (alleged) stylistic sin; that was the logical subject, even if that required a passive verb.

The authors of usage guides shamelessly doctor the evidence on passive by offering examples that range from unlikely to fantastic: Strunk and White's is, "My first visit to Boston will always be remembered by me." But there's more to vividness than active verbs. "Someone killed my parakeet" has an active verb. "My parakeet was hacked to bits with a machete" doesn't.

Liberman thinks that grammarians may have to accept that there are now two meanings of "passive voice," the technical and the popular one. But have we really reached that point? When words like schizophrenic and epicenter acquire their popular senses, it's because most people use (or understand) the new usage. The people misusing the term "passive voice" are still a minority, most of them writers who would rather not make the mistake. (It looks pretty foolish, after all, to misuse a grammatical term when you're denouncing someone else's usage.)

So maybe it's not too late to reform casual usage. We could start by dropping the term "voice," since nobody knows its technical sense. "Passive verb" works well on its own.

Then teachers could vow to use only real-life examples of passives - no wacky invented sentences like Strunk and White's. (Yes, real examples will be less absurd than the fake ones. What does that tell you?) And enough already with the "evil passive" label; why would a teacher want to spread simple-mindedness?

Call me a cockeyed optimist, but the anti-passive campaign is less than a century old; we can still escape the clutches of this ignorant cliche. Can't we? 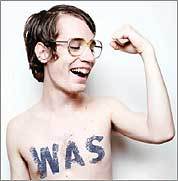