A radical plan for Obama's presidential library: Let's cancel it

ALTHOUGH BARACK OBAMA has been president for little more than a month, that doesn't mean it's too early to start talking about his presidential library. After all, once election to the presidency puts someone in the White House his thoughts inevitably turn to another location. The White House is his only on loan. A presidential library, however, is a mansion that's solely his - an altar where others can genuflect before his achievements, and an attic in which to stow away his failures. Presidents have come to expend so much time and effort on their libraries it can almost seem that such institutions are the final, grandest trapping of office, like British prime ministers being elevated to a peerage. Baroness Thatcher of Kesteven, meet Bill Clinton of the William J. Clinton Presidential Library and Museum.

The problem with this "tradition" is that it's not in any way traditional. The presidential library dates back less than 70 years. More important, the United States doesn't have a House of Lords. It's a country where libraries are for reading and research, not nine-figure reputation-burnishing.

So it's not too early for Obama to reject the idea of having a presidential library. As a candidate, he made change the byword of his campaign, and here's one instance where it's not only long overdue but easily achieved. Obama should leave all the slavering over terrazzo and plate glass to chief executives less secure in their legacy. Just say no, Mr. President!

On the face of it, such an idea might seem ridiculous. Why shouldn't Obama have a presidential library, a place for his papers and the records of his administration to be archived and a museum dedicated to his life and work? Every president since Herbert Hoover has one or, in the case of George W. Bush, will have one. But that argument has things backward. What's truly ridiculous is the idea that just because someone is elected to the highest office in the Republic he's then not only entitled but expected to act like a pharaoh and build a monument to his own importance. Quite simply, presidential libraries are undemocratic and unnecessary (the National Archives and Records Administration already has fine facilities, thank you very much). They're even conducive to unethical behavior. Recall that it was Denise Rich's donation of $450,000 to the Clinton presidential library fund that made his pardoning of her on-the-lam husband, Marc, such a scandal in 2001.

There are 13 presidential libraries in all. Pharaohs were fond of numerology. Such an unlucky number would be a good place to stop.

Presidential libraries have come to seem somehow mandatory, as much a part of the highest office in the land as Secret Service details and "Hail to the Chief." Yet it wasn't always so. The imperial presidency provided a post-presidential imperial building program.

In simpler times, administrations generated far fewer documents; and the presidency wasn't seen as being so exalted it required personalized repositories.

The manuscript division of the Library of Congress has the papers of 23 of the first 29 presidents. The first presidential library didn't open until 1941. That was Roosevelt's, and every subsequent president has had one.

Chronologically, Roosevelt doesn't come first in the list of presidents with a library. That would be Hoover. Seeing the success of the libraries of Roosevelt, Truman, and Eisenhower, Hoover decided to have one, too. The Hoover Library isn't just the first presidential library in the order of chief executives. It's the only one to have among its holdings the papers of Laura Ingalls Wilder, thus making it a kind of Little White House on the Prairie. The Kennedy Library has Ernest Hemingway's papers. Perhaps an argument for Obama's having one is that it could provide a worthy home for Oprah's.

Although the National Archives administers the libraries, they are built and endowed with private funds. They have become grotesquely expensive. Whereas "presidential library" has always meant a museum as well as archive (all those replica Oval Offices and the like), now it also entails a center or foundation, too. Clinton raised $165 million for his library. Bush is seeking to raise $300 million for his. It goes unmentioned that the many worthy causes those various presidential centers and foundations promote could be advanced far more effectively without the Tutankhamen-style construction projects. The presidential library has also created something new in the realm of public shamelessness: The spectacle of the most powerful man in the world reduced to being a supplicant for the greater glory of his own reputation.

The irony is they can be Flying Dutchman-like embarrassments. The Kennedy, Nixon, and Reagan libraries all followed wayward paths to their present locations, as public protests led to the rejection of proposed sites. If Karnak doesn't pan out, there's always Luxor (or Simi Valley). Furthermore, their simultaneous requirement to be monumental and bland - Ozymandias at the shopping mall, Kim Jong-il having open house at the bunker - has been the undoing of such noted architects as I.M. Pei (Kennedy's), Gordon Bunshaft (Johnson's), and James Polshek (Clinton's). It's strangely fitting that the design of the most architecturally distinctive library, Roosevelt's, came from the president himself.

None of this would matter, of course, if presidential libraries were necessary to serve what is their ostensible primary purpose: the preservation, organization, and making available for public inspection the records of their respective presidents. There was a time when the purpose was gruesomely neglected. Many presidential heirs in the 19th and early 20th centuries would cut signatures off documents to sell to autograph seekers. Sometimes the culprit was the president himself. The day before he died Chester A. Arthur filled three trash cans with official papers and burned them. Thanks to the Presidential Libraries Act of 1955 and Presidential Records Act of 1978 such archival atrocities can't happen today.

Yet there's no need for an intermediary, the presidential library, between the National Archives and the documents. Owing to the untrustworthiness of Richard Nixon, NARA has already shown how well it can make available a presidential record on its own. Nixon had sought to take his papers with him to California when he resigned from office. Congress, fearing what could happen to tapes and documents that might serve as evidence in Watergate-related trials, prohibited him from doing so. This led to a Sisyphean series of court actions that lasted beyond Nixon's death. The papers did finally end up in the Nixon Library, in 2007. Yet the Archives had possession before then, first in a leased warehouse in an Alexandria, Va., industrial park, then in its Archives II facility, in College Park, Md. As the author of a Nixon book who spent time using both facilities, I saw firsthand that presidential archives don't require presidential libraries to be accessible and well maintained.

What the Nixon Library had even when it didn't have Nixon's presidential papers (or tapes) was something that neither of the NARA facilities did: the house where the president was born and spent the first nine years of his life. That house can reveal more about Nixon than any number of documents can. One justification of presidential libraries has been that they provide a sense of how where a president came from shaped who he was. This is certainly true with the Hoover, Roosevelt, Truman, and Eisenhower libraries; it may even be true with Ford's (change in Grand Rapids is neither grand nor rapid). Yet that white bungalow Frank Nixon built for his family indicates just how irrelevant that argument has otherwise become. The lemon grove it once lay in long ago gave way to the Orange County sprawl of Yorba Linda Blvd. The house remains a revelation; the setting does not.

What the accelerating pace of social change in 20th-century America made increasingly obsolete, the biographical journey of Barack Obama has rendered completely so. Where would an Obama Library make most sense: Hawaii? Kansas? Indonesia (the presidential library goes global!)? Southern California? Manhattan's Upper West Side? Cambridge (which once rejected the Kennedy Library)? Hyde Park? That would be the one in Chicago, of course. Obama transcends place as well as race. It's no small part of what makes him such an extraordinary figure.

Presidents, even mediocre and poor ones, are no fools. In fact, it's especially the mediocre and poor ones who aren't fools; the great ones tend to be those who do things that initially seem foolish (a Louisiana Purchase, an Emancipation Proclamation, a challenge to tear down the Berlin Wall). And who among us doesn't want a monument or memorial? So it's come to seem de rigueur - rather than de trop - that a library is as much a part of a post-presidency as a pension. But it isn't and shouldn't be.

Mark Feeney, a member of the Globe staff, is the author of "Nixon at the Movies: A Book about Belief." 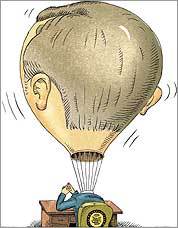