Turns out, money really does drive speeding tickets. Look out.

IF YOU'VE EVER seen the flashing lights of a cruiser in your rearview mirror, then been slapped with a costly speeding ticket, you might have thought it was just your bad luck.

Or, if you were an economics researcher on a summer fellowship in the Berkshires, you might have suspected that you'd just been trapped by a web of larger social forces, and set out to investigate them.

That's what happened to Michael D. Makowsky, who was a graduate student driving to see his girlfriend in Vermont when he got pulled over on Interstate 91. Even though he was going no faster than the cars around him, Makowsky got a ticket, and he couldn't help but wonder if his Virginia license plate had something to do with it.

Working with George Mason University professor Thomas Stratmann, Makowsky discovered that his hunch was right. People from other states have a significantly higher probability of getting tickets instead of warnings from Massachusetts state troopers for driving the same speed as local drivers. When motorists are stopped by municipal police, the same holds true for out-of-town drivers compared with hometown ones. In fact, each additional mile that a driver lives from the district court where the ticket would be challenged, the higher the chance of getting a ticket.

And lest you suspect that the police might see those out-of-towners as a source of revenue - well, it looks like they do.

If a town is strapped for cash, the economists found, police are even more likely to ticket out-of-towners instead of issuing them warnings.

The unusual study is one of the few ever conducted into the forces behind ticketing, which drivers have long suspected are more complex than the standard police claim that tickets are simply a safety measure.

"When you create a cash incentive, so to speak, to find somebody guilty of a crime, well, you're probably going to start finding more people guilty," said Makowsky, now an assistant professor at Towson University.

Police deny that finances are a concern: It's safety, they say, that drives ticketing. But Makowsky and Stratmann's findings, along with another new study, show that an apparently straightforward procedure like ticketing speeders is more complicated, and less evenly applied, than it might seem. The reams of Massachusetts data Makowsky and Stratmann reviewed were initially collected as a way to track racial profiling in police stops. And, as in the case of profiling, the statistics tell a bigger story that might not be obvious to the people in each interaction.

Understanding how and why laws are enforced is crucially important in any society committed to equal treatment and protection. And Massachusetts residents have a more immediate interest, too: With nearly every city and town in the state now confronting a budget crisis, the economic pressures on communities stand to get even higher in the coming year.

However, a piece of good news lurks there, too: In a recent follow-up to their study, Makowsky and Stratmann found that the increase in tickets does reduce accidents and injuries. In other words, the recession just might have a bright side: safer roads.

The speed limit is nearly as old as the automobile itself, predating not just the radar gun but the driver's license and the widespread availability of speedometers. It was initially the province of local officials, but Connecticut lawmakers became the first to enact a statewide limit, in 1901. Massachusetts followed soon after, imposing limits of 10 miles per hour in the city and 15 miles per hour in the country, in April 1902.

Police set up the first speed trap in Massachusetts shortly after the first speed limit. When the stricter local limit of 8 m.p.h. failed to produce the desired result in Lincoln, police there timed motorists driving between two marked points on the road. Those exceeding 8 m.p.h. were treated with a harsh surprise - "the rather brutal method of stretching a rope across the road," according to an account in the Dec. 10, 1902, edition of The Horseless Age, a national newspaper that carried weekly automotive news.

Eventually, such swift and sudden punishments were replaced with fines, which were surely more pleasant for drivers, but raised a different issue. In economic terms, the fines created a new incentive. Once towns can make money from writing tickets, that potentially changes the decision about when to do it.

Today, in place of the rope, we have the Massachusetts Uniform Citation, a form used for both fines and warnings - and part of a state record-keeping system that helped make Massachusetts a nearly perfect arena for Makowsky and Stratmann to study how economic incentives affect ticketing.

As a result of the records gathered from across the state for the racial profiling law, the economists had access to data about vehicle speed, driver hometown, and ticket-or-warning outcomes for thousands of motorists. The state's population density and the small size of its cities and towns mean police officers frequently confront out-of-town drivers. And the presence of Proposition 2½, whose override votes often signal that towns are hurting for money, gave them a particularly good window onto the economic health of individual cities and towns.

"It's like a perfect storm, from an economist's point of view," Makowsky said.

When they compiled all the data, their analysis showed that an out-of-town driver is 24 percent more likely to get a ticket from municipal police than a local driver, and the likelihood rises yet further for an out-of-state driver.

Non-local drivers in financially struggling towns had the highest likelihood of all.

The findings will be published next month in the American Economic Review, in a paper titled "Political Economy at Any Speed: What Determines Traffic Citations?"

The results confirm the suspicions of countless drivers who have received tickets when they were hoping to be let off with warnings - you're more likely to pay a fine if you're from out of town, and woe unto you if you hail from beyond the vicinity of the local district court.

But the results also rile up police and local officials, who strongly disagree that financial incentives affect traffic ticketing.

"The chiefs recommend that officers do enforcement because we know it makes the roads safer," said John M. Collins, general counsel for the Massachusetts Chiefs of Police Association.

There is no "bounty mentality," he says, and officers are not pressured to ticket out-of-towners or meet quotas to raise revenue. "With all the other things going on in policing, this doesn't even make the radar screen."

Told about the study, Collins was skeptical about the findings. But if police are unknowingly treating out-of-town drivers differently than locals, that should be examined, he said.

"If it is [true], then I think people will have to look at that and say, 'What are we doing? And what can we learn from it?' " he said.

Geoffrey Beckwith, who has been helping local officials cope with their budget crises as the executive director of the Massachusetts Municipal Association, dismissed the premise of the study. Traffic fines cover less than 1 percent of the budget for the typical city and town, making the money involved too small for communities to consider ticketing for reasons other than safety, he said.

"It's not a revenue strategy at all - in spite of what an economist who's been pulled over for speeding might want to conclude," said Beckwith, whose organization provides advocacy, training, policy, and research for the state's cities and towns.

But Makowsky and Stratmann's work was backed up by the only other paper done on this topic - also about to be published. In that paper, Gary A. Wagner, a University of Arkansas at Little Rock economist, and Thomas A. Garrett, an economist and researcher with the Federal Reserve Bank of St. Louis, looked at North Carolina and found that a 10 percent decrease in the growth rate for a county's revenue prompted the rate of growth in ticket-writing to increase 6.4 percent the following year.

It's not necessarily that police are ordered to write more tickets in down years, says Makowsky. Economic incentives, like the revenue from a ticket, can work in subtle ways. Officers in cash-strapped municipalities coping with layoffs and reduced services don't need to be told to start writing more tickets.

"When our incentives change, we know it," he said. "We don't need it laid out for us."

Speeding tickets are a popular hobbyhorse, and when Makowsky and Stratmann first put their findings online in draft form, they began getting feedback - not just from the academics who normally read such papers, but from writers, bloggers, and drivers who had been convinced all along that police were ticketing them to make money.

So the economists wondered: What if this ticketing makes us safer after all?

They went back to Massachusetts, looking at nearly two years of data on accidents and tickets in more than 300 cities and towns. They found that an extra 100 tickets a month written by a local police department would eliminate 14.3 accidents and spare 5.6 crash-related injuries.

The findings aren't as bulletproof as the first study - "This is us being a little bit clever," Makowsky said - but suggest a more positive dimension to the phenomenon.

"Officers doing their job, regardless of their underlying motivations in terms of fines and revenues, actually make the roads a much safer place," he said.

It corresponds with studies on individual drivers, said Tom Vanderbilt, author of the book "Traffic: Why We Drive the Way We Do (and What It Says About Us)": Their likelihood of being involved in a fatal crash decreases in the months after receiving a ticket.

Makowsky, for his part, hasn't returned to Massachusetts since the summer he received his ticket. But that stop and fine - and the subsequent time studying the issue - at least altered his approach behind the wheel.

"I find myself driving a little safer, you know?" he said. "I'm in less of a hurry."

Eric Moskowitz is a member of the Globe staff. 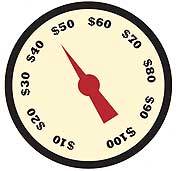