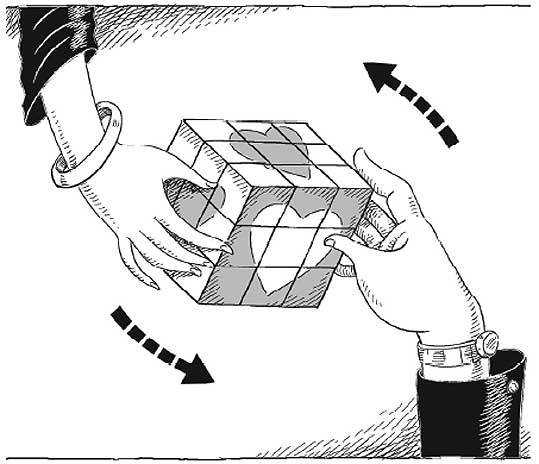 ONE OF THE more important skills in the male repertoire is figuring out whether a female is interested in mating. Researchers at Florida State University have new insights into the matter. They asked women to participate in an experimental task that was ostensibly about trying to solve a Rubik's Cube in cooperation with a stranger, each using only one hand and not speaking. The stranger was a "fairly attractive" male research assistant. A video (without audio) of the session was then shown to other people, who assessed the behavior of the woman. The observers were pretty accurate in guessing a woman's promiscuous disposition, though women, and the jealous, did a better job. Surprisingly, smiling, laughing, tilting one's head, an open posture, touching one's hair, hand gestures, physical proximity, and provocative dress were not associated with a woman's promiscuous disposition. The reliable signals, it turned out, were eyebrow flashes, glances, and distraction from the task at hand.

SOMETIMES, WHEN NEWS shows do live interviews from remote locations, there is a noticeable time delay in the conversation, which can be painful to watch. Researchers tested the same scenario - but in a laboratory where two strangers discussed politics over a one-second-delayed closed-circuit television link - and found a remarkable pattern. If one person was white and the other was nonwhite, there was more anxiety in the conversation with the one-second delay. This suggests that a brief hesitation in an introductory interracial conversation is over-perceived as a signal of anxiety in the other person. This could be of special concern, the authors note, because "police officers, judges, and prosecutors frequently use apparently apprehensive behavior as a marker of deceptiveness during interrogations."

IF SOMEONE WRONGED you, do you think you'd feel better after meting out justice? Most people would say yes, but this, at least according to a new study, turns out to be wrong. Psychologists asked people to play a computer game against other people for money (though, in reality, the computer was simulating the other players). During the game, one of the other "players" took advantage of the group, thereby earning more money. After the game, some participants were given the opportunity to impose a penalty (at a small cost) on the bad player, and some were allowed to see someone else impose a penalty. A control group wasn't allowed to consider penalties at all. Although people expected to feel better after imposing the penalty, those who penalized the bad player themselves felt significantly worse afterward than the control group, because, it appears, they couldn't stop thinking about the bad player. Seeing someone else impose the penalty was no worse, but no better, than being in the control group.

WITH THE ADOPTION of digital video recorders, fewer people watch commercials on TV anymore. After all, it's not like anyone wants to watch commercials (except during the Super Bowl, maybe). However, new research says that you may be missing out. When college students were asked to watch an episode of "Taxi," they enjoyed the version with commercials more than the version without commercials. The same thing happened when watching a nature show, such that students who watched the version with commercials were more willing to donate to wildlife preservation. The effect arises because the novelty of an experience can wear off, and a break can reset one's attention. There are a couple caveats to the effect, though: It doesn't apply to older people (with their longer attention spans), or to exciting shows. Of course, if younger people watch only exciting shows, then advertisers may be out of luck anyway.

Malpractice reform is no cure

IN THE NEVER-ENDING public debate about healthcare reform, medical malpractice is one of the big issues at center stage. Some widely cited research has estimated that defensive medicine - extra care provided mainly out of fear of being sued - adds over 5 percent to the cost of medical care, without improving the quality of care. Researchers at Duke and UNC examined more recent and extensive data, and found that malpractice reforms (e.g., damage caps) had an insignificant effect on total cost, without any apparent effect on quality, suggesting that defensive medicine may not be as big an issue as feared.