HISTORIC. EPOCHAL. MOMENTOUS. With the inauguration of Barack Obama a week away, the words have already become a refrain, trumpeting the significance of the nation's first black president.

But many young people across America are having a very different reaction.

"To me, he's just like every other president that got elected," a 20-year-old junior at Simmons College wrote in another forum.

It may sound strange to people who lived through the civil rights era, but it's true: if you were born after, say, 1978, a black president doesn't necessarily feel like a milestone. It feels like something you've seen before. You've watched Morgan Freeman lead the free world as the planet was menaced by a comet in "Deep Impact." You've seen Dennis Haysbert, on the TV drama "24," appearing more presidential for 79 episodes than some heads of state look in real life. And although he has not yet entered the Oval Office in a movie, you can no longer count the number of times that Will Smith has rescued mankind.

It might seem like a stretch to suggest that TV and movie characters can shape how we look at real-world events, but a wave of sociological research is showing that it really does work that way. Fiction, in fact, can shape our perceptions of the world even more than reality.

"Our research suggests that people really do in a lot of ways treat fictional characters like real people," said Melanie C. Green, a psychology professor at the University of North Carolina in Chapel Hill. In 2004, she studied more than 100 college students and found that fictional narratives had just as strong an influence on their beliefs as nonfiction.

"To the extent that younger people have grown up seeing images of black presidents," she said, "it is totally understandable that they would think about it in a different way than an older generation would."

On election night, my mother watched Obama's victory overtaken by emotion. She can still remember the first black person she ever saw on television, when she was a teenager on the black side of the segregated South. On that same election night, my 14-year-old nephew - raised in a world where God can look like Morgan Freeman - grew so bored that he begged to change the channel.

Yet if television helped usher in a better America - where a generation can assume that skin color isn't a barrier to becoming the most powerful person on earth - it also presents a new challenge. When TV replaces real history and real experience, researchers warn, we risk living out our lives in a kind of heaven cooked up by sitcom writers, where we believe that our nation's most pernicious problems don't need our attention because they have already, somehow, been solved.

Researchers have been studying the effects of television since at least the 1960s, when the US government began to take an interest in what the fairly new household appliance was doing to the human mind. The longest-running study of television content on viewers' beliefs was launched in 1967, when race riots prompted President Lyndon B. Johnson to set up a commission to investigate possible causes, including whether TV played a role.

The commission asked George Gerbner, a University of Pennsylvania communicatons professor, to look at whether TV violence led to violence in real life. Congress expanded Gerbner's mandate, expecting to find a link much like the one that had been discovered between smoking and cancer.

Gerber's conclusions were not so simple, but in some ways more disturbing.

He found that violence on TV didn't make people more violent, but it did make them more afraid, a phenomenon now known as "the mean world syndrome." His studies also showed that heavy television viewers became less tolerant of "outsiders" - like blacks and gays - rarely portrayed on TV at the time.

While every generation has used stories to inform their beliefs and assumptions about the world, Gerbner saw television as far more potent: it creates a visual memory in the brain similar to the recollection of an actual experience. And the television he saw was lagging behind culture, preserving prejudice like a fly in amber.

Alarmed by his findings, Gerbner became a national activist on the dangers of the tube, warning that networks and advertisers' financial interest in attracting the widest possible audiences - the white mainstream - was creating a more racist society

But today, 40 years later, his contemporaries are warning of just the opposite: That television has leapt hurdles we haven't yet crossed, creating the false impression that our deepest social problems have disappeared.

By the 1980s, television had changed, in part due to Gerbner's activism, his former colleagues say. The decade's most popular show starred a black man, Bill Cosby, as an affluent doctor wrestling humorously with the problems typical of an upper-middle-class father. The beliefs of viewers followed. In 1985, as the crack epidemic plagued urban communities, researchers at the University of Wisconsin-Madison found that white college students who watched a lot of entertainment TV overestimated the levels of socioeconomic success African-Americans had achieved. They also felt more favorably about blacks than those who did not watch entertainment shows.

At the same time, blacks who watched a lot of TV tended to overestimate the amount of integration in American society, according to a study by Howard University's Paula Matabane.

"When you watch a lot of television, the values that you see in television tend to overtake your real-world experience," Matabane said.

By 1994, the year my nephew was born, black characters made up about 11 percent of the prime time population, nearly the percentage that they did in real life. In addition to singers, athletes, drug dealers, and pimps, they were doctors on "ER," lawyers in "The Practice," and - yes - even the president of the United States.

By 1998, it did not seem at all unreasonable to cast Morgan Freeman as America's commander in chief, guiding the nation through the threat of extinction from a comet. His mixture of planning, humanity, and faith inspired one reviewer to ask, "Where do we line up to vote for him?"

A few years later, Dennis Haysbert played another black president on the popular Fox series "24." In a show filled with treachery and terrorism, Haysbert's David Palmer stood as a moral anchor, a leader who was decisive without rushing to judgment.

Their characters were noteworthy not just because they were black, but because their blackness wasn't a big deal. James Earl Jones had played a black president in the 1972 film "The Man," but then it was played as a novelty - his character made it to the Oval Office only because everyone else in line was accidentally killed, and once he did, he risked assassination and impeachment because of his race. President David Palmer on "24" might have been fictional, but he wasn't a novelty: He allowed Americans of all ages not just to imagine the possibility of a black president, but to literally watch one in action, week after week.

The wealthier, sexier, more racially integrated television world that we now inhabit has helped shape the real world in its image. Freeman and Haysbert prefigured not just Obama's race, but his almost preternatural calm under pressure, providing an emotional precedent for voters to elect a man who would have seemed an unthinkable candidate for president just 10 years ago.

But the same images also make it harder for some young people to internalize why Obama's victory really is significant. Just as entertainment once erased black people from the American cultural psyche, today it can blind us not just to history, but to the country's current struggles of race and class.

"The unremarkablity of having an African-American candidate that people will vote for is a healthy thing" for society, said Michael Morgan, a professor at UMass-Amherst who worked with Gerbner and has continued Gerbner's study. "But today, if everything you knew about the world you learned from television, you would think that African-Americans were a super-affluent group. . . . That makes people oblivious to real problems. That's what is sort of insidious about it."

"TV is a fantasy factory," said Sut Jhally, coauthor of the 1992 book, "Enlightened Racism: The Cosby Show, Audiences and the Myth of the American Dream," which suggested that the show's success allowed people to overlook the social problems that still confront black Americans. "We'd like to have a world where there isn't any racism, so that's what television presents to us. But when we see images of Cosby, Morgan Freeman, and now Obama, people say, 'if blacks are not making it the same way that whites are making it, then it's their own fault. It's not society's responsibility.' "

When Jhally and others look at TV, they see an alternate America in which affluent black characters have captured our imagination for more than two decades, while in the real world, far more black people than whites live below the poverty line. Wise black presidents have guided us fearlessly through pop-culture disasters for a decade, but it's still news in the real United States when a black person gets elected senator or governor, never mind president.

In some ways it's natural for young people to miss the full weight of history; the civil rights movement feels like a distant story to most people under 40, and one generation inevitably tries to move past the struggles of the last. But when Barack Obama's presidency feels less like a precedent than a rerun we have already seen, we have lost an important part of the plot.

To assume that the challenges of the future have already been met - whether building colonies in space, or creating a world where real families are as well-off as those we watch on TV - is to risk losing any sense of urgency in meeting those challenges. If Gerbner were still alive today, he might find this idealistic complacency, not racism, to be TV's greatest threat.

Farah Stockman is a reporter in the Globe's Washington bureau. 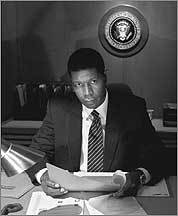 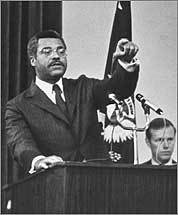