The year in maps

A cartography boom offers new ways to see the world 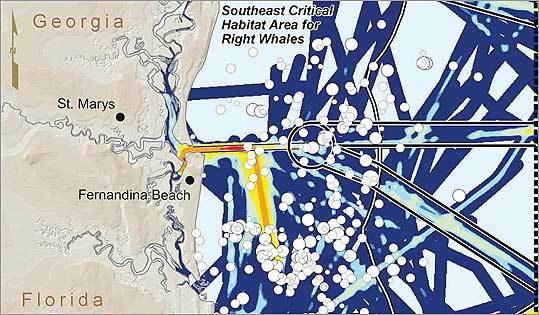 A detail of a map of vessel density versus right whale sightings off the coasts of Florida and Georgia, with white dots representing whale sightings.
By Drake Bennett December 28, 2008
Text size – +

IN THE EARLY Middle Ages, if an educated Westerner set out to make a standard map of the world, here is what he would do: draw a circle, then a horizontal band across that circle, then a vertical band dividing the bottom half of the circle in two. The result resembled a hood ornament with a "T" in the middle. The semicircle at the top was Asia; the identical quarter-circles below were Europe and Africa.

Today, it's easy to feel superior to a society that thought Europe and Africa looked like matching slices of pizza, but we shouldn't. That medieval map said very little about how the world was shaped, but it had a lot of information: For starters, it told you that God's creation was symmetrical, and thus perfect, and that its apex was Jerusalem. In a deeply religious society in which most people never made it more than a few miles from home, this was understood to be far more important than knowing the exact contours of the Mediterranean.

Thanks to satellites, surveying, and ever-increasing computing power, mapping has become geographically accurate beyond the dreams of a medieval mind. But many of those same technological advances have also brought us full circle: Maps have increasingly become vehicles not just for telling us how the world looks, but for organizing and representing all sorts of information.

The past year saw an explosion of such maps, portraying everything from earthquake devastation to voting patterns to international reading habits - often made on the fly, by citizens, in response to events. Like their medieval predecessors, the most interesting maps are often useless for getting from point A to point B. But if you want to understand what happened in 2008, they are an excellent way to navigate the year.

Each of the year's big news events generated its own clutch of maps, exposing patterns and relationships that could change how we saw an important story. Among the many maps published this year of Iraq or Afghanistan was an online animation showing the pattern of insurgent attacks in each country over the past five years. As it plays, the attacks sprout, pox-like, faster and faster. But important differences emerge: In Iraq they reach a climax just before the 2007 surge, while in Afghanistan, they go on proliferating. And while in Iraq the attacks cluster thickly, in Afghanistan they are more dispersed, suggesting the far broader and more diffuse challenge of bringing them under control.

The November terrorist attacks in Mumbai were not just shocking but bewildering to follow, and maps became a way for people to track the event as it unfolded. Within hours of the first shootings, Google Maps renderings of the claw-like Mumbai peninsula were up online with tags showing the details, confirmed and unconfirmed, that were coming in. Updated as the standoff dragged on, the maps helped give structure to the chaos for people following from abroad. Even people who had never been to Mumbai got a sense of the chillingly impressive level of the attackers' coordination. In the days afterward it emerged that the terrorists themselves had relied on Google Earth satellite imagery in their preparations.

Not all maps traced distant catastrophe, though. Others offered themselves in a more pragmatic spirit. One created by Mayor Thomas Menino's office shows what it calls "Solar Boston," a map not so much of the city but of its rooftops. Turn on the appropriate feature and the city's roofs glow an unsettling mosaic of yellow, orange, and red. The colors are meant to show which buildings, because of their size and orientation and height, would be best suited for solar panels. Of course, the map is as much an advertising pitch as a tool - nearly every rooftop, it suggests, has some solar potential, and could save its owners thousands in energy bills (The Boston Globe's offices, for example, look especially ripe).

Another project, from researchers at Harvard's Center for Geographic Analysis, mapped the density of health clubs in and around metro Boston for an obesity study. It shows a smoldering center of high gym density in the city and its immediate surroundings, but head in any direction and the map quickly grows pale as you enter the gym-starved hinterlands.

Charts have a long history at sea, where landmarks are few and mostly submerged, but a researcher at the New England Aquarium created a different sort of sea chart this year - a diagram of ships vs. whales. For a decade, environmentalists have fought to lower the speed limits for ships traveling in coastal waters inhabited by the endangered right whale, since ship strikes are the whales' leading cause of death. As part of the effort, geographer Kerry Lagueux has been making maps that superimpose shipping lanes and right whale habitats. What's striking about Lagueux's maps is how crowded they make the ocean look. The major sea lanes look like highways, and the splayed blue lines of the less-traveled routes tangle messily between them. The white bubbles that show where whales have been spotted look like snowballs caught in a demolition derby. (Earlier this month the federal government did lower the ship speed limit in right whale habitats.)

Some of the most mesmerizing maps of the year, though, were of as-yet-uninhabitable places. NASA's unmanned Cassini spacecraft continued sending back imagery of Saturn and its moons - among them Titan, with its enormous lakes of methane and ethane - for extraterrestrially minded mapmakers to work with. Another map that made the rounds of mapping blogs last spring showed a diagram of all the ground Neil Armstrong and Buzz Aldrin covered during their 1969 walk on the moon's surface, with their paths traced over a soccer field for scale. As it turns out, the great American moon walk wasn't much of a walk - in two and a half hours on the surface, the astronauts didn't even make it to midfield, except for one foray that got Armstrong nearly to the opposing penalty spot.

For sheer ubiquity, no map this year approached the presidential polling map. On cable news channels and political websites and blogs, it was impossible to miss, with its reds, blues, and the jaundiced yellow of the tossups. Newspaper websites created interactive versions, allowing viewers to lay down and peel back different layers of data to look at factors like campaign donations, ethnicity, or past election results.

The most eye-catching map might have been CNN's "Magic Wall," a massive map on a touchscreen originally marketed as a military intelligence tool. Night after night, correspondent John King looked like a cross between a theremin player and a field marshal, tapping and caressing the screen, zooming in and out, or zipping down the coast to check another battleground state. The Magic Wall generated its own parody map on "Saturday Night Live," in which Oregon could be moved out into the Pacific, Minnesota dragged onto Virginia, and Michigan bounced off the bottom of the screen.

The mapmaker's challenge - how to render digestible the enormous numbers and raw statistics that describe our world - doesn't always require new technology. Sometimes it's just a matter of creative labeling. For example, China is the world's most populous country, with 1.3 billion people. How big is that? One way to think about it is to compare the population of each of China's provinces with that of an entire other country. One map posted this year on the blog Strange Maps did just that, showing, for example, that Liaoning, the 14th-biggest province in the country, has roughly as many people as Argentina.

Another method is the strategically distorted map called a cartogram. Cartograms reflect information by inflating or shrinking parts of the map to reflect something besides accurate square mileage - income, perhaps, or population. The best-known were made in the wake of the last two presidential elections. In these, the red states and blue states were rescaled based on population, so it was clear that large swaths of the vast "red" heartland in the middle of the country represented relatively few voters compared with compact but populous Eastern states like Massachusetts and New Jersey. The result was a map that more accurately reflected how closely the country was divided - and became even more complex and interesting in those versions where red and blue were presented as a continuum through hues of purple, a nation of big Democratic cities shot through with webs of rural Republicanism.

Mark Newman, the University of Michigan physicist who created the algorithm responsible for the best-known election cartograms, coauthored a book this year that uses cartograms to illustrate hundreds of global trends, from immigration flows to carbon dioxide emissions to Internet use. Surprises abound. Spain leaves a large footprint in book publishing, but dwindles to insignificance when it comes to library use. A map of the world's rabies deaths is little more than a giant, bloated nation of India - which also dominates the world in movie viewing.

The value of the cartogram, Newman argues, is its simplicity. Even a color-coded map, after all, requires a legend. But cartograms embed information in the contours of the map itself, using our assumptions about maps, and our familiarity with the actual shape of the world, to drive home the point.

"You don't have to learn how to read these maps," Newman says, summing up, in a sense, the whole enterprise of mapping. "You look at it and it makes sense." At top, a map showing the famous footsteps of Buzz Aldrin and Neil Armstrong--if they had walked on a soccer field rather than the moon. Above, a map of a portion of Titan, a moon of Saturn, with its lakes of methane and ethane.
Advertisement
Boston.com Most EmailedSubscribe to SliceBookmark Boston.com Most Emailed120