NOTHING COULD BE easier than finding an outlandish assertion, a baldfaced lie, a counterfactual claim on the Web, where anyone can say anything - at least temporarily.

Still, linguistics student Gabe Doyle was surprised by what he found on the list of "English words with disputed usage" at Wikipedia. Most of the entries were familiar - comprise, nauseous, unique - but one, says Doyle in a post at Motivated Grammar, was novel: "Some prescriptivists argue not should not conclude a sentence," it said.

Seriously? he asked. Where were these prescriptivists who thought it was wrong to say "I think not," or "She thought she was free, but she's not"? He checked some usage books, and found that "none of them make even the scarcest mention of this supposed controversy."

And there it is: A new usage rule, fresh out of the oven and ready to feed to the unsuspecting masses. It reminded me of a recent e-mail from Kevin, whose high school English teacher had a similarly inventive usage theory. She rejected the sentence "The pitcher threw no strikes," he recalled: "She asked me to show her how to throw 'no strike.' She said the correct way to say it would be, 'The pitcher didn't throw any strikes.' "

This doctrine, of course, was just plain nutty. No in this construction means "not any," as it has since Old English. No grammarian or usagist has banned it. Yet Kevin was successfully browbeaten: "For years I avoided writing things such as "The store had no bananas," "I have no opinion," "I ate no onions," he wrote.

But a surprising number of the old, familiar usage rules are just as arbitrary as this one. When the idea of tidying up English caught on, usage guidance became a kind of sport, with grammarians trashing one another and pitching their own ever subtler refinements.

Thus John Dryden, in a 1672 essay, suggested that a preposition at the end of a sentence - a natural occurrence in English - was a less than elegant phrasing; his opinion launched a fetish that persists today.

In Dryden's time, though, at least you could still call foods "healthy": "There is no flesh more healthy . . . than lamb" wrote one diet guru in 1683. Two centuries later, an American usage writer decided healthy and healthful had to be pried apart. In "The Verbalist" (1881), Alfred Ayres declared that we ought to reserve wholesome for food, healthful for living conditions, and healthy for living beings, setting the table for a feast of pointless nitpicking. (Healthy still outdoes healthful, and it's still correct.)

The journalistic notion that you can't use "over" for "more than" - still enshrined in the AP stylebook - is another 19th-century invention. It first appeared on a list of banned expressions issued by William Cullen Bryant when he was editor of the New York Evening Post. Over had been used this way for 500 years when Bryant took a dislike to it.

But that was 150 years ago, you say. Surely these days, a journalist can't issue a usage edict based on nothing but whim. Or can he?

He can, apparently, if he's James J. Kilpatrick. This fall, Kilpatrick has issued at least two new rules in his syndicated usage column.

The first one came in a column criticizing the New York Times for calling the Lincoln Center renovation an "enormous reconstruction project." Enormous is the wrong word, he said, because it is tainted by enormity; as all peevologists know, we're supposed to use enormity to mean "great wickedness," not simply "immensity."

"Observers may reasonably disagree on the Manhattan project," concluded Kilpatrick, "but it doesn't deserve to be tagged as 'enormous.' "

But Kilpatrick has it backward. Enormous lost its last trace of wickedness a couple of centuries ago; it really does mean just "huge." And the now-innocent enormous is sweetening enormity, not being tainted by it.

Not long after, Kilpatrick decided something was wrong with expressions like "he seems like a good candidate." "The 'like' in these erring constructions is excess baggage," he admonished. If the meaning of seems is "appears to be," you should skip the word like, and just say "He seems a good candidate."

Kilpatrick's version is fine, though it sounds more British than American. But seems like has never been bad usage. Samuel Pepys, in a 1664 diary entry, said that a British naval encounter "seems like a victory." And Richard Grant White, in his popular 19th-century guide "Words and Their Uses," also employs the phrase: "Citizen is used by some . . . with what seems like an affectation of the French usage."

So if a usage rule sounds far-fetched, check it out. Sure, it might have roots in Anglo-Saxon declensions, but it's just as likely it was invented by a scholar or editor in a fit of usage crankiness. 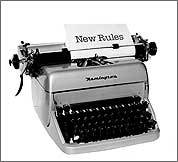