LAST WEEKEND, I was ready to grouse and grumble once more about my fellow journalists' weakness for misusing ye olde Elizabethan verbs.

First there was Gail Collins in the New York Times: "I like thinking of next year's senate as a kind of mythic quest movie," she wrote, "in which a Democratic hero in need of a stimulus package or a Supreme Court confirmation is told: 'Go forth and seeketh the Women of Maine.' "

The next day, the Sunday Globe's main page one headline - on a story about the Bruins' resurgence - was "The icemen returneth."

My problem is not the archaism but the grammar: These constructions are as off-kilter as "They has a problem" or "We loves Christmas." That verb ending on seeketh and returneth is not a poetic flourish, but a mark of the third person singular: He, she, or it returneth. Thou return'st, if thou must, but for everyone else it's just return.

But once the fit of grammar righteousness passed, I had second thoughts. I've already put this complaint on the record, more than once; maybe it's time to move on. After all, I routinely preach tolerance of language change. And the more I learn, the less urgently my stickler sense tingles in the presence of the old usage bugbears.

I no longer care, for instance, how you pronounce forte; one syllable is more French, say the purists, but in French it would be spelled fort and pronounced FOR, so authenticity is pretty much a lost cause.

Same for run the gantlet instead of gauntlet: The word was gattlopp in Swedish, but it was mangled the moment we borrowed it, almost 400 years ago. Does it really matter which spelling of the French word for "glove" we use to represent it today?

As for career, meaning "speed recklessly," I might like the word better if I had ever heard it uttered by an actual person. Nobody uses it; motor vehicles speed or careen, and with career so busy at its other job, there's no reason to make it do this one.

Of course, like most people, I still have strong feelings about some traditional usages. But why should the correct conjugation of obsolete verb forms be one of them? I suppose it's for the same ignoble reason we cherish most pet peeves: Special knowledge makes us feel special.

Anyone can (and does) complain about for free and I could care less and figurative literally: Join the crowd. But complaining about archaic conjugations amounts to a boast that you've read your Chaucer and Shakespeare and maybe the King James Bible.

And yet, I know it doesn't matter if people take liberties with these antique verb forms. So how to persuade myself to relax and enjoy - or at least not mind - "Their cups runneth over"?

I started with Albert Baugh's "History of the English Language," where I learned that during the 16th century, as forms like runneth were giving way to the modern runs, the -s ending sometimes migrated to the third person plural: They runs. And in southern England, the -eth ending was also sometimes plural - they runneth - into the 18th century.

A bit of searching turned up some examples. A 1529 letter assures Cardinal Wolsey, "they saith that they have certain knowledge"; a 1641 deposition has "they saith moreover that they would send 15,000 Irishmen over into England before Midsummer day next."

And today's journalists aren't the first to use faux-archaic verbs for effect. The 18th-century poet Thomas Chatterton, using language he was passing off as 15th-century, wrote, "Like hunted bucks, they runneth here, and there." A satirical article in Punch, in 1875, has "They know not what they sayeth."

That's enough to reconcile me to "The icemen returneth" (and to remind me how much I don't know). All I have to do is think of runneth as an archaic plural instead of an incorrect singular.

But scholarship aside, it seems clear that for most people the archaic verbs are in the same rhetorical storage bin as Ye Olde Pizza Shoppe. You may not remember that Ye is really "The," with a Y approximating an Old English letter called thorn, but you understand that Ye Olde is a jokey nod to a generic past time. Likewise, anyone can cometh and goeth, grammar be damned, as long as it's all in fun.

Even the New York Times Magazine approves this license. A dozen years ago, it ran a spoof interview of Romeo and Juliet filled with mismatched verbs: "They'd gangeth up," "we couldst not," "we taketh." The language seems to have survived.

Even more reassuring: A Nexis search shows that only about 15 percent of the uses of runneth are incorrect. (Gantlet and gauntlet, by comparison, run neck and neck.) Clearly these verbal oddities are no threat to literacy, and I should be fuming (if at all) about something else.

There, I feeleth better already. 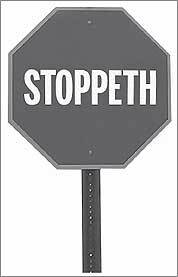