THERE'S NO SUCH category, really, as "language books"; every year brings a collection of ambitious histories (long and short), specialized reference books, grammar grab bags, and quirky collections, in varying proportions. This year's crop is different only in its unusual abundance; all the books mentioned here deserve a look - and many can be explored online - but the list goes on: For even more choices, check the Word blog, boston.com/ideas/theword.

"Our Magnificent Bastard Tongue: The Untold History of English," by John McWhorter (Gotham, $22.50). Why does English look so different from its Germanic cousins? Forget the Norman invasion, says McWhorter; so what if the French brought a bunch of new words? It was the Celts and, especially, the Viking invaders who did the serious remodeling work on English grammar. (And maybe the Phoenicians put an oar in too.)

"The Secret Life of Words: How English Became English," by Henry Hitchings (Farrar, Straus & Giroux, $27). No secret lives here, but never mind: This rich and readable history is dense with telling details. Hitchings looks at English through the lens of successive cultural clashes, documenting the marks left through the centuries, from Celtic and Roman influences to Arabic, Indian, Yiddish, and everything in between.

"Always On: Language in an Online and Mobile World," by Naomi S. Baron (Oxford, $29.95). Baron is no knee-jerk pessimist, but as an admirer (and fine practitioner) of English prose, she has some worries about the direction written language is taking - toward shorter, more casual styles - and the way technology can amplify the process. What sort of culture is it, she wonders, that believes the un-Twittered life is not worth living?

"Txtng: the gr8 db8," by David Crystal (Oxford, $19.95). Crystal, the prolific British linguist, reads the research, explores text-messaging practices worldwide, and tells doomsayers to lighten up: "All the evidence suggests that belief in an impending linguistic disaster is a consequence of a mythology largely created by the media."

"Don't Sleep, There Are Snakes: Life and Language in the Amazonian Jungle," by Daniel L. Everett (Pantheon, $26.95). Everett went to live among the Pirahas of Brazil as a missionary; his years with them eroded his faith, but convinced him that their language poses a challenge to Chomskyan orthodoxy about an innate universal grammar. Part anthropological adventure, part linguistic exploration, the book also has the most memorable author photo of the decade.

"On the Dot: The Speck that Changed the World," by Alexander Humez and Nicholas Humez (Oxford, $24.95). The dot in its many guises - ellipsis point, musical notation, computer language, bullet, abbreviation marker - anchors a series of playful explorations into proofreading, underwear, death euphemisms, and other unlikely realms.

"Reading the OED: One Man, One Year, 21,730 Pages," by Ammon Shea (Perigee, $21.95). Shea's journey through the Oxford English Dictionary - all 20 volumes - involved headaches, visits from library mice, and plentiful coffee. This amiable record of the trip showcases some of his favorite discoveries, like illutible (unable to be washed away), exsibilation (hissing someone off the stage), and somnificator (one who puts you to sleep).

"100 Words Almost Everyone Mispronounces" (Houghton Mifflin Harcourt, $5.95). The latest in the "100 Words" series from the American Heritage editors reminds us that divisive should rhyme with decisive, that processes should not end with seize, and that Diaspora starts with dye, not dee. The bad news: flaccid has lost its backbone, and is now pronounced flass-id more often than the traditional flak-sid. (Will eccentric and accident be next to crumple?)

"Damp Squid: The English Language Laid Bare," by Jeremy Butterfield (Oxford, $19.95). The tantalizing title comes from a British "eggcorn," or mishearing of a common expression; a "damp squib" is a firework that fizzles. But the center of the book - sometimes obscured by the chatty digressions - is the Oxford Corpus, a vast searchable database of English that allows researchers to see which words are fading (minuscule), which are soaring (miniscule, so spelled) and which ones go about together: Quick, what comes after "naked"? Not what you think: Most of the time, it's "eye."

"Alphabet Juice: The Energies, Gists, and Spirits of Letters, Words, and Combinations Thereof: Their Roots, Bones, Innards, Piths, Pips, and Secret Parts, Tinctures, Tonics, and Essences; With Examples of Their Usage Foul and Savory," by Roy Blount Jr. (Farrar, Straus & Giroux, $25). As the title resoundingly announces, there's plenty of vintage Blount here - on "murder your darlings" as bad writing advice, on Brigitte Bardot, on the authorship of Shakespeare's plays. But when it comes to the occasional usage judgment, I can't help thinking Blount is playing at being a crusty crank. He doesn't mind demean in its modern sense, but he's still going on about hopefully? He really thinks words sound like their senses? (Try marmoreal.) Luckily, the occasional outbreaks of dogmatism don't spoil the prevailing celebratory mood. 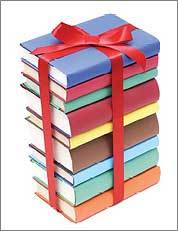