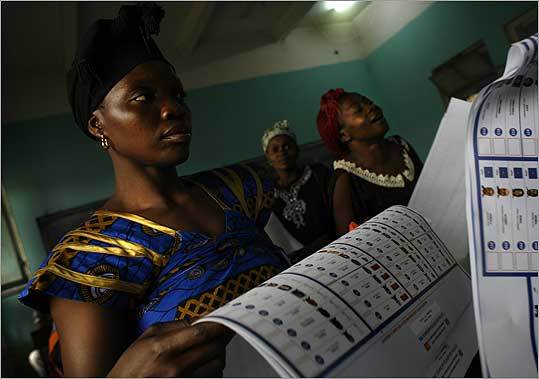 In countries such as the Democratic Republic of Congo, voting has become a thin veneer over an authoritarian, conflict-ridden society. (Jehad Nga)
By Joshua Kurlantzick November 30, 2008
Text size – +

THE DEMOCRATIC REPUBLIC of Congo, now ravaged by war, seemed to have a promising future just a decade ago. Mobutu Sese Seko, the longtime dictator, had seen his grasp of power slip as he aged and got sick, and rebels marched across the country from the east, ultimately taking power in 1997. Laurent Kabila, the former rebel leader who took over after Mobutu, promised to build a democracy that would bring together the giant, fractured country.

The nation's turn was emblematic: In the early 1990s, Africa appeared poised for takeoff to a time of real democracy. With the Cold War over, Western powers no longer simply backed whatever dictator took their side. And at the same time, the independence generation of African leaders, many of whom had authoritarian tendencies and large amounts of power, was passing from the scene. Africans looked to new leaders like Uganda's Yoweri Museveni, Ethiopia's Meles Zenawi, and many others. Bill Clinton, on a 1998 visit to the continent, touted what many saw as an exciting "new generation" of African leaders.

Alas, this new generation has begun to look like an echo of the past one. In Congo, Kabila soon turned autocratic himself, and ultimately was assassinated by one of his staff in a failed coup attempt; the country is now ruled by a shaky democracy, but one in which the president is vested with so much power it can hardly be called free. In Uganda, Museveni's government allegedly committed massive human rights abuses, while other new-generation leaders fell into the same old ways.

Still, these new-generation leaders made one change from the past: they generally held elections. Indeed, from Uganda to Rwanda, Africa is now paralyzed by the rise of a new, but not necessarily better, form of government - failed democracy, in which a country holds elections but does not develop other institutions, sparking conflict rather than easing it. In these countries, elections have become referenda on tribal or religious identity, solidifying antagonisms between groups. Worse, the electoral winners have utilized their mandate to stamp out many other elements of democracy, like a free press, trade unions, and opposition parties.

Across broad swaths of the continent, there has been a move to democracy; yet, in some ways, giving more power to the people has actually made the continent's conflicts worse.

Africa's failure of democracy is proving destructive across the continent. Too often, it is entrenching old hatreds, and leaving in power leaders who can claim they were elected while tearing apart civil society. And the rise of failed democracies also provides a lesson for Western leaders, and their democracy-promotion outfits, who thought they had the formula right. Holding elections is not enough; and, though it might be heresy to suggest it, sometimes a strong, unelected leader may prove more effective in the short term. Worst of all, many Africans, their hopes for democracy damaged, are turning once again to other means to solve their disputes - like the gun, in Congo, where some outside observers now fear a Rwanda-style genocide.

Africa's wholesale move to democracy has been remarkable. In the beginning of the 1990s, nearly the entire swath of land south of Sudan was run by autocrats. Today, according to global monitoring organization Freedom House, every nation south of Sudan ranks as either "partly free" or "free," save the two Congos, Rwanda, Swaziland, Zimbabwe, Cameroon, Angola, and Somalia. Indeed, nearly the entire continent now lives under a form of democracy.

It was a change that was welcomed in the West; for years, Western democracy-promotion outfits, like America's National Endowment for Democracy, had invested in building freer societies across the continent. Western leaders argued that, with democracy, Africa would be able to settle old conflicts at the ballot box, and create the stronger growth rates that come with freer societies.

And in some respects, these new democracies are better than the old. Forced to at least occasionally face the voters, African leaders no longer are able to engage in the kind of extreme kleptocracy practiced by the likes of Mobutu, who made Congo (then Zaire) his personal purse, allegedly squirreling away billions in Swiss bank accounts. In some countries, like Zambia, democracy also has led to a flowering of NGOs, trade unions, press outlets, and other types of civil society.

But with a few exceptions, like Botswana and South Africa, most of these countries have failed to create truly inclusive or stable democracies. Instead, they have created systems in which leaders, representing one ethnic group or religious group, win elections and then use their time in office to enrich only their tribe or religious cohort. These divisions, exacerbated by elections, make some newer democracies more conflict-prone than old-fashioned autocracies. In Kenya, long considered one of the continent's most stable nations, elections in late 2007 became a stark referendum on ethnic ties. At least 600 people were killed and tens of thousands uprooted from their homes.

In many countries, the old urge to dominate has proven too powerful even for the new generation. In Ethiopia, Zenawi soon turned authoritarian, allegedly unleashing his security forces to torture and rape civilians in the rebellious southeast of the country, and locking up hundreds of opposition supporters after elections. In Nigeria, former president Olusegun Obasanjo, touted as the continent's brightest hope when he took over its largest nation, used his time in office to attempt to change the constitution to give himself more terms and then installed his handpicked successor as president in an election marred by fraud.

"The election was a charade," declared a group of Nigerian opinion leaders monitoring the poll.

In some cases, freer politics also has meant freer graft. Unlike the old autocracies, where corruption filtered to an elite circle, in the new democracies officials at all levels can stick out their hands. When I visited Malawi, one of the poorest nations on the continent, local businesspeople complained that, compared with the era of dictator Hastings Banda, today they have to pay off many more government officials to get through a maze of bureaucracy.

The move toward democracy also seems to have made African leaders no more likely to promote democracy outside their borders. Despite vowing to no longer tolerate dictators, Africa's leaders seem content to look the other way. Most notoriously, the government of South Africa, the richest and most powerful state on the continent, did nothing for years as Robert Mugabe terrorized neighboring Zimbabwe.

The Bush administration vowed it would transform America's foreign aid to reward countries that governed themselves well, but it has shoveled funding to African leaders who commit to counterterrorism. Zenawi, for one - his government, working with the United States, launched an incursion into Somalia in an (ill-fated) effort to defeat Islamists there. One comprehensive study by the Center for Public Integrity, an investigative reporting group, found that, in the three years before 9/11, US military aid to Ethiopia totaled less than $1 million. In the three years after, it totaled more than $16 million.

This lack of sanction for human rights abuses only encourages more tyranny. For years after the extent of his crackdown became clear, Mugabe attended African summits and was received warmly by his peers - since, as leaders of failed democracies, they did not want anyone criticizing them either.

Democracy has also failed to deliver economic results for the continent's poorest people. Africa has achieved higher growth rates in the past decade than many previous years; by 2006, the World Bank reported it was catching up, in annual growth, with the rest of the developing world. But, with some exceptions, growth has not filtered down.

Perhaps unsurprisingly, then, Africans are increasingly disillusioned with democracy. In 2007, polls by the Afrobarometer research organization found that the number of Africans satisfied with democracy had fallen by 15 percent since 2001. Akwe Amosu, a senior policy analyst for Africa at the Open Society Institute, says Africans still have an appetite for democracy, but "there's no doubt that people of all classes feel they're losing some battles and past gains."

The failure of many African democracies should make democracy-promotion groups reconsider their strategies on the continent. Simply getting countries to embrace elections means little, if they then fall into the failed democracy trap. For some democracy-promotion organizations, this will mean broadening their work, to include promoting inter-ethnic dialogue and supporting other aspects of democracy, like free media, so that they are not relying on polls alone to bring societies together.

For others in the West, it may mean thinking the unthinkable: That, at least for a time, a stable, relatively liberal autocracy may prove more effective than democracy. In Rwanda, for example, a society still recovering from a genocide, leader Paul Kagame has with a strong hand managed to rebuild many of the country's institutions and to use his power to attract foreign investment, while preventing the kind of ethnic strife that might come from new elections. The country may grow by as much as 10 percent this year, one of the highest rates on the continent. And, despite an absence of democracy, Kagame oversaw a national consultative process that resulted in the successful drafting of a new constitution.

Kagame is not without flaws: His government stands accused of extrajudicial killing, severe restrictions on the press, and other abuses. But before him, says Mauro de Lorenzo, an Africa expert at the American Enterprise Institute, Rwanda faced disaster.

"Look carefully at what happened in Rwanda, Zaire, and Burundi, 1990 to 1994," he says. "In each case, the rapid imposition, from outside, of the structures and mechanisms of multiparty democracy leads directly to the unprecedented cataclysm that subsequently engulfed each place. People here [in America] forget or never knew; those who lived through it learned some lasting lessons."

Joshua Kurlantzick is a visiting scholar at the Carnegie Endowment for International Peace and author of "Charm Offensive: How China's Soft Power is Transforming the World." He can be reached at jkurlantzick@ceip.org.