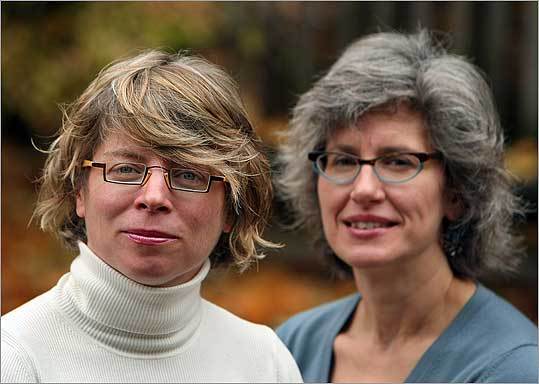 A talk with Jane Kamensky and Jill Lepore

HISTORIANS AREN'T SUPPOSED to make things up. Even at its most writerly, history weaves its story out of threads of fact. But the latest book from Jill Lepore and Jane Kamensky, two important academic historians known for carefully documenting the lives of history's minor participants, isn't a bulwark of fact at all. It's a novel.

Next month, Kamensky and Lepore will publish "Blindspot," a novel that depicts Boston a decade before the American Revolution. Packing together a romance and a murder mystery, the pair mine their own early American research to come up with a story at once about the past and about how the historian studies it.

It's not that the two, who met 20 years ago while studying at Yale, haven't enjoyed significant success in their field. Lepore holds an endowed professorship at Harvard and has been a finalist for a Pulitzer Prize; Kamensky chairs the history department at Brandeis. They have become noted practitioners of "microhistory," detailing the lives of ordinary people rather than chronicling the deeds of the great.

To prepare for the book, Lepore walked to work with the early novel "Tristram Shandy" playing on her iPod. She and Kamensky made glossaries of their favorite phrases from 18th-century literature. Their attention to language mirrored a renewed attention to the daily existence of their subjects' lives, and in the end, they found, the book helped reconnect them to their professional goal of giving voice to the sometimes voiceless actors of the past.

Lepore and Kamensky spoke with Ideas in a joint interview at the Hi-Rise bakery in Harvard Square.

LEPORE: I don't think we had a particular purpose going in. It really was: "This will be fun. Let's do this." . . . What it turned into - and this is the thing that most surprised me - is that it fed back into my work as an historian. . . . I'm working on Benjamin Franklin now, writing a biography of Franklin and his sister; I feel very close to both of them, as a nonfiction writer, in a way that I don't think I would have felt if we hadn't written this novel.

KAMENSKY: It trained me to value faculties which get truncated in an academic historian. We're always treading the line between argument and content. We privilege argument over content because we live with - forgive me - the stalking fear of journalism. That's "just journalism," some academics would say, if it's "What was the weather like?," "What was the day like?," "What did the carts sound like going over the street?" Doing fiction was, though it was made-up, an opportunity to glory in content.

IDEAS: How conscious were you of using your novel to teach lessons rather than just tell a story? It is going to surprise an average reader that slavery played a role in Boston in 1760.

KAMENSKY: We've both been very conscious of the fact that the new social history of the 1970s and 1980s did so many wonderful things recovering the stories of non-elite actors - women, people of color, poor people - but it is an inherently non-narrative form. . . . I think one of the things that made us want to write fiction was caring passionately about the intellectual issues of the new social history and caring passionately about narrative, too.

LEPORE: The murder in our novel is based on a real murder. There were these real Charlestown slaves, Mark and Phyllis, who poisoned their master, John Codman, in 1755. In our book, we had one of our characters go free and one hanged, but the real Mark and Phyllis were burned at the stake in Cambridge.

KAMENSKY: Fifty feet from my house.

LEPORE: If anything, we toned down the level of brutality and savagery of early American history because I think some readers would have a hard time crediting that there were so many slaves in Boston and that slavery played so great a part in the political debate and political rhetoric.

IDEAS: What can't you do with traditional history?

KAMENSKY: I think there are certain categories of humanity whose interior lives will remain more or less forever closed to us. . . . The 12-year-old enslaved girl who was raped by her master was not in a place where she could leave a diary. . . . Even if she did leave a diary, the chances that it survives are extremely slim.

LEPORE: I've written on this slave rebellion [in New York]. This one guy that I knew, who was in the prison in the basement of City Hall, in the dungeon, for months, and I knew he knew how to read and write. I knew he knew more than one language - a very cosmopolitan, sophisticated man. I had a report from someone who had been in the jail cell, who said that while he was there, "he read little and cried much." Just that phrase. I thought and thought and thought about that. That was as close as I could get to how this man felt. He had been sentenced to be burned at the stake for something he probably did not do. . . . I could speculate day and night about how that might have felt, but I would not, as an historian, dare say what I thought. It would have been an act of gross condescension to suggest that I knew what that felt like: to be, in 1741, in the dungeon beneath City Hall, waiting to be burned at the stake. . . . I find that, as an historian, an awfully frustrating moment in the archives.

IDEAS: So are there ways that literature is a truer representation of the past than history?

IDEAS: Writing a book together couldn't have been easy. Did you argue?

LEPORE: We wrote the book as if we were playing a tennis game. The ball is going to be returned. Where am I supposed to be standing? I would write something and send it to Jane. She would write something back. The story would have moved along in a way that I hadn't necessarily predicted or expected and that I had to respond to. . . . If anything, the thing we most fought over was this strongly felt need for our characters to be made happy.