Want a free education? A brief guide to the burgeoning world of online video lectures.

Forget Charlie Rose - Wilson has Google for a soapbox. Amid the amateur-hour piffle of YouTube "talent" and skateboarding dogs, the famed biologist stands in bold relief, with more than 500 Google video search results to his credit: Interviews ranging far afield of TV shows to a spate of appearances on several Web-only video platforms such as Meaningoflife.tv, Bigthink.com, Fora.tv, and the online home of the Technology Entertainment Design (TED) conference.

It was through a TED presentation that Wilson chose to unveil his proposal for the Encyclopedia of Life, a Wikipedia of biodiversity, and a few short months later he secured the funding necessary to launch it. Hitting the talk show circuit never looked so passe.

The rise this year of a host of new Web video sites targeting high-minded, edifying content suggests that today's marketplace of ideas is rapidly moving online. "The Last Lecture," a 76-minute video by the late engineering professor Randy Pausch recorded late last year, became a crossover phenomenon - viewed by at least 7 million - and easily one of the most widely watched academic events in history. The buzzy presentation shorts of TED surged past 50 million viewings on only their second birthday.

Newly minted video start-ups Fora.tv and Bigthink.com, boasting auspicious programming starring top-shelf public intellectuals, each pledged this year to become a thinking person's YouTube: With combined inventories in the tens of thousands of clips and numerous partnerships with major media properties, that viewership is only expanding. And iTunes U., a multimedia channel of free higher education content at the iTunes Store, continued to amass its increasingly Amazonian stockpile of labs and lectures from schools around the world.

From interviews with obscure geniuses to splashy marquee names, and from hoary conference proceedings and drowsy first-year survey classes to passionate debates at exclusive, invite-only affairs like the Aspen Institute, an entire back catalog of cerebral Web video is steadily accumulating online. How do the various offerings rate?

The TED Talks program single-handedly popularized the phenomenon of brainy programming. It's an online repository of zippy, often provocative presentations delivered by speakers at the eponymous conference. Topics range widely across the arts and sciences: inventors in today's Africa, the nature of happiness, and an evolutionary theory of technology.

TED has become, in no small part due to its videos' viral popularity, a high rooftop in academia for world authorities to report on the latest thinking in their fields, an Oprah of the intelligentsia. Like Oprah, it wields considerable kingmaking power through its presentation schedule, whose speakers graduate to greater buzz, and sometimes lasting celebrity, in the wider media.

The reason TED videos work? Their winning production values and packaging translate so well online. Even the stuffiest subject - say, Swedish global health professor Hans Rosling talking about how to visualize statistics - proves, through the meticulously observed conventions of a TED presentation (brisk pacing, humor, strong visuals), a reliably entertaining break from the tedium and rigors of high church academic discourse. TED is not a venue for speakers to go deep on a subject; instead, it's one for teasing out the more bravura elements of their work.

Amassing video from public events and colloquia around the world, the online video storehouse Fora.tv is the wide angle lens to TED's close-up. Giving up a TED-like uniform polish for the capaciousness of its collection, Fora.tv is quickly expanding its inventory through a deep roster of partners: a number of schools, the New Republic, Brookings Institution, the Oxonian Society, the Long Now Foundation, the Hoover Foundation, and the Aspen Institute.

The speakers themselves include a wide range of Nobel laureates, cultural notables, politicians, and policy wonks - but also a good deal of unexpected surprises. Settle in for a lively food fight between Christopher Hitchens and the Rev. Al Sharpton, tussling over religion at the New York Public Library, and then rove over to see Christian Lander, author of the blog Stuff White People Like, gawking meekly and stopping to photograph the large crowd attending his Washington, D.C., reading.

Fora.tv's features are more specialized than the others, including the ability for users to compile their own video libraries, as well to upload and integrate their own contributions, public access cable-style. Production quality hardly warrants demerits in the face of the catalog collected here - one could sink into this C-SPAN of the public sphere for days of unexpected viewing.

For those who think small is better, the video clip library of Bigthink.com delivers. Its shorts are studio-shot, first-person interviews. Each clip features the interviewee answering a single question or waxing on a single topic: for example, UCLA law professor Kal Raustiala explaining his "piracy paradox," the puzzle that intellectual property protection may be inhibiting creative progress in culture and industry.

Like TED Talks, Bigthink.com video can be searched by themes and ideas as well as speakers. It also provides text transcripts, which are easy to scan and search for those just researching.

Its edge is in the notoriety of its interviewees - world leaders, presidential candidates, and prestigious thinkers - combined with its prolific production schedule. It maintains the clip of new content one would expect of a daily television show, not an Internet video site. Still, for longer sittings, its quick-take editing style can feel thin.

Nearly every day, it publishes a new "diavlog", or two-way video debate, and chapters allow users to surf quickly between conversation points. The diavlog is a millennial take on another press mainstay, the opinion editorial. (Disclosure: Bloggingheads.tv has a partnership with the through the Times' opinion pages online. The Globe is owned by the New York Times Co.)

The roster of speakers is heavy on journalists and public-policy types, and the daily subject matter skews - no doubt, somewhat wearingly for some of us - toward headline political news and opinion. While Wright and Kaus star as the mainstays, the stable of commentators is populous enough to keep Bloggingheads.tv from the whiff of celebrity - the topic is always the star.

For those seeking substance over sheen, the occasional videos released at Edge.org hit the mark. The Edge Foundation community is a circle, mainly scientists but also other academics, entrepreneurs, and cultural figures, brought together by the literary agent John Brockman.

Edge's long-form interview videos are a deep-dive into the daily lives and passions of its subjects, and their passions are presented without primers or apologies. It is presently streaming excerpts from a private lecture, including a thoughtful question and answer session, by Nobel laureate Daniel Kahneman to Edge colleagues on the importance of behavioral economics.

It won't run to everyone's tastes. Unvarnished speakers like Sendhil Mullainathan, a MacArthur recipient with intriguing insights on poverty, are filmed in casual lecture, his thoughts unspooling in the mode of someone not preoccupied with clarity or economy of expression. The text transcripts are helpful in this context.

Regardless, the decidedly noncommercial nature of Edge's offerings, and the egghead imprimatur of the Edge community, lend its videos a refreshing air, making one wonder if broadcast television will ever offer half the off-kilter sparkle of their salon chatter.

And as for Charlie Rose? Perhaps he's voted with his feet. Excerpts of his PBS show are now streaming daily at the online magazine Slate.

Jeffrey MacIntyre (jeffmacintyre.com), who writes on culture, science and technology, is also a consultant to digital publishers (predicate-llc.com). He lives in New York.

Correction: An article about video lectures ("U Tube") in the Ideas section of Sunday, Nov. 2, misidentified Edward O. Wilson of Harvard University. He is a biologist. 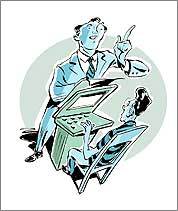