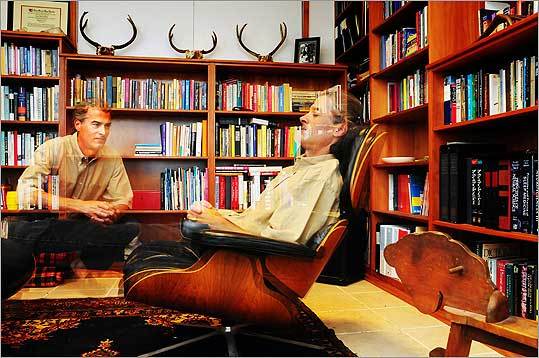 (Jan Sturmann for The Boston Globe) For Kelly Bulkeley, "The problem of how you interpret dreams without being deceived is a real source of tension for a lot of religions."
Q&A

A talk with Kelly Bulkeley

A scholar explores the deep ties between our dream lives and the great religions of the world.

KELLY BULKELEY FIRST became interested in dreams as a teenager, after being haunted by a recurring nightmare of being chased by Darth Vader. He'd wake up in a cold sweat, terrified of that glossy black mask. While the typical adolescent would probably choose to avoid "Star Wars" paraphernalia, Bulkeley ended up pursuing the deeper meaning of the dreams: Why were these imagined experiences so vivid and powerful? Where did they come from? What was their significance?

Bulkeley discovered that the content of dreams - the particular stories we tell ourselves when asleep - had been disregarded as a scientific subject. "Studying dreams still seemed like a very Freudian activity," he says, "and nobody wanted to do anything that Freud might have done."

This led Bulkeley to divinity school. For most of recorded history, he explains, dreaming has been intertwined with the divine. A vivid nightmare was a prophecy, a coded message from the gods. What Bulkeley wanted to do was use this rich religious tradition to better understand the process of dreaming. "You see the same type of dream occur over and over again, in all these different religious texts," he says. "I think this universality can teach us something interesting about how the brain works."

A visiting scholar at the Graduate Theological Union in Berkeley, Calif., Bulkeley recently published "Dreaming in the World's Religions," a vast survey of religious dreams and religious attitudes toward dreaming. He analyzes the sexually tempting nightmares of St. Augustine and the mourning dreams of "The Illiad," the conception dream of Buddha's mother and the "vision quests" of the Ojibwa people. But Bulkeley isn't interested in these dreams because of what they teach us about the divine. "I'm not a particularly religious person," he says. Rather, he hopes that these old narratives will inspire new research. A dream might not be real, but it can still illuminate the reality of the human mind.

IDEAS: Do you think dreaming played a crucial role in the development of religion?

BULKELEY: I think it's clear that having certain kinds of dreams can't help but provoke religious or spiritual thoughts. It's just inevitable. In that sense, spirituality is a natural outgrowth of the way the dreaming brain seems to work. I've tried to be very agnostic in this book, but I can also see why theologically minded people find dreams to be such a source of inspiration.

IDEAS: There's a long tradition of people trying to understand the mind of God by studying their own dreams. But dreams are also inherently ambiguous and open to interpretation. How do religions deal with that issue?

BULKELEY: The problem of how you interpret dreams without being deceived is a real source of tension for a lot of religions. You might think you've cracked the code [of the dream] but you haven't. Or maybe the demon is trying to trick you with dreams.

There's this assumption, I think, that looking at dreams goes along with a naive state of mind, that you've got to suspend reason and critical thinking when thinking about dream content. But, in fact, virtually every culture has struggled with that very question, the question of decoding, how to find the deeper messages and not be misled.

IDEAS: You argue that modern science can learn about dreaming from religion. Do you have a favorite example that you use when talking to scientists?

BULKELEY: Well, consider this particular kind of nightmare dream that recurs again and again in religious texts. In the Christian tradition they talk about the incubus, or the demons of the night. In Newfoundland, it's the old hag and so on. But what all these various religions agree on is that there's a type of nightmare that's very intense and involves the constriction of breathing or paralysis. Now we know, thanks to modern science, that this is a real class of dream called night terrors and they're very different from ordinary nightmares. So all these texts that talk about night terrors, they're actually describing a real element of human experience.

IDEAS: Then is it fair to say that these religious prophets or religious texts were there first? That they described a psychological phenomenon that science would only later describe?

BULKELEY: If you bracket out the claims about how the world was created or what God is like, and you just look at the kind of experiences that are described in all these religious texts, and then compare these descriptions to what we know today from science, I think you can see that there are some real correlations. I'm talking about dreams that appear across cultures - they're universal themes - and that suggests to me that these dreams are rooted in a fundamental feature of human nature.

IDEAS: Was there a particular moment when dreams stopped being seen as largely religious phenomena?

BULKELEY: As far back as Aristotle, people are thinking that dreams are at least in part produced by the physical workings of our bodies and not just messages from above. I think that sort of skepticism has been part of a more widespread tradition that you can see in just about every culture, which is the acknowledgment that even these dreams which seem to have a spiritual dimension can still be false or misleading.

In more modern times, it's easy to pin the blame on [Rene] Descartes, who largely dismissed dreams as irrelevant. . . .The irony is that we now know from scholarship that Descartes had some powerful dreams himself which inspired him to leave his family business and become a philosopher.

IDEAS: You argue in your book that modern science, like Descartes, has largely discounted dream content as inherently meaningless. Is this a mistake?

BULKELEY: My partisan view is that science should certainly learn to appreciate dream content. I think too often there's this belief among scientists that dreams are just random utterances of the brain stem and that we shouldn't waste time trying to figure out what they mean.

In part, I think this is a justifiable reaction to the tendency of Freud and Jung to impose categories onto dreams, and so then you end up finding what you expect to find. It's absolutely fair to question those loose interpretative systems.

But I also think it's possible to analyze dream content in a more systematic way, so that you can really pull out these patterns that are universal. And I think you can find some of these universals by looking at various religions.

IDEAS: Do you still dream about Darth Vader?

BULKELEY: No, I haven't been visited by Darth in a while, which is quite nice.

Jonah Lehrer is an editor at large at Seed magazine and the author of "Proust Was a Neuroscientist." His next book, "How We Decide," will be published in February. He is a regular contributor to Ideas.